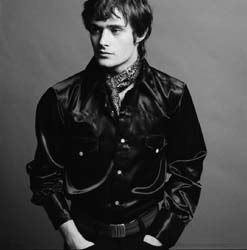 Written Description Logan has the looks of a Dauntless. The muscles, the height, the general good looks. He has a good smile though he never exactly fully smiles.
hair color: Deep brown, looks just about black
eye color: Brown
height: 5'11"
weight: 165
skin tone: Neither pale nor tan.
Distinguishable marking: He has a simple tattoo around his ankle. It is simply a black line.

personality: Logan has a generally quiet persona. There is a difference between shy and and being a quiet person. He is not shy. He's the guy you didn't notice was in the room until you bumped into him, literally. He has a smooth way of talking and is always in a kind of nonchalant attitude. Logan is just a pretty passive person. But don't let that fool you, get on his bad side and he'll break your face. So he does have a temper, it just takes quiet a bit of irritation to get him to show it fully. He's a pretty selfless guy though. Logan doesn't do much for himself.

family:
partner: N/A
daughter: N/A
son: N/A
other living relatives or close friends: None, both of Logan's parents ran away to become factionless when he was about to enter initiation. They offered Logan the choice to come with them or stay. He stayed. Everyone in Dauntless believes them to have simply vanished.

History Logan was born and raised in Dauntless. There was no doubt he'd stay there. He had great skills and talent. He was strong, mentally and physically. But right before Choosing Day, his parents dropped a bomb on him. They told him they weren't going to live like this anymore. And he knew exactly what they meant: fearing their divergence. They told him they were becoming factionless, and he could stay or go with them. But Logan wasn't going to run. He stayed despite his own divergence and remained in Dauntless. He did extremely well and now has a house of his own.

fears:
- Becoming a coward
- Being pushed into the chasm, only to never find a bottom
- Becoming paralyzed

dislikes:
- Overly, obnoxiously tough people
- People who roll their eyes at other people or make rude remarks
- People thinking he is weak just because he has a quiet nature

weaknesses:
- He has trouble with friends because he's just not talkative
- Showing strong emotions
- Making jokes

Weapon of Choice: Knives, they are more discreet and quiet

Aptitude test result Abnegation and Dauntless
Faction they chose at choosing ceremony: Dauntless
divergent: yes
other: Logan also doesn't like to admit when he needs help. He doesn't like it when others have to do things for him. He feels he should be doing others the service.

Sure! Maybe sometime we can roleplay them once he's approved

Sure :) and sorry, I haven't read the books in awhile, what exactly is the Dauntless Compound? Like, I know the Pit is the heart of all activity, but what it the compound? Just the hallways connected the rooms?