This year I've decided to combine my corner and personal challenge thread into one. I plan on keeping track of my challenges here, as well as doing a monthly book round up.


A: Paris Adrift
B: Beartown
C: The Death Cure
D: The Dark Days Club
E: The Exact Opposite of Okay
F: The Fever Code
G: Goldenhand
H: High-Rise
I: Sam & Ilsa's Last Hurrah
J: Just So Stories
K: The Kill Order
L: The Lido
M: The Language of Thorns: Midnight Tales and Dangerous Magic
N: Nerve
O: Ready Player One
P: A Confusion of Princes
Q: Gaysia: Adventures in the Queer East
R: Ruin and Rising
S: Outliers: The Story of Success
T: The Scorch Trials
U: Uprooted
V: Simon vs. the Homo Sapiens Agenda
W: The Hazel Wood
X: The Poet X
Y: Stories of Your Life and Others
Z: Pride and Prejudice and Zombies: Dawn of the Dreadfuls 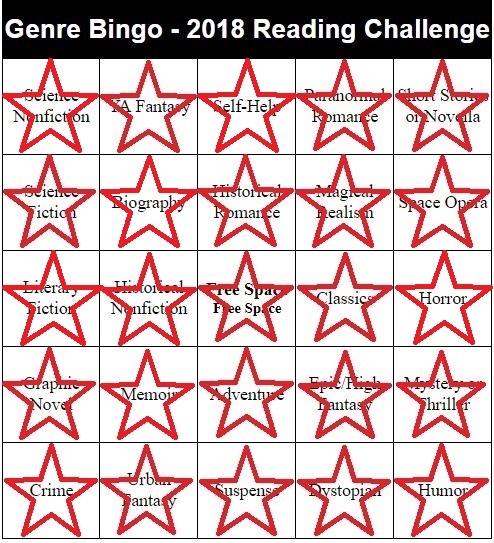 Sub-genres of some of my favourite genres:

I will finish 12 series I have started before this year.
I will start 7 series this year.

The Dark Artifices:
Lord of Shadows

The Diviners:
Lair of Dreams
Before the Devil Breaks You

Wolf by Wolf
Blood for Blood

Rebel of the Sands: COMPLETE
✔ Traitor to the Throne
✔ Hero at the Fall

Not a Drop to Drink: COMPLETE
✔ In a Handful of Dust

Me Before You: COMPLETE
✔ After You
✔ Still Me

The Girl with All the Gifts: COMPLETE
✔ The Boy on the Bridge

Creekwood: COMPLETE
✔ Simon vs. the Homo Sapiens Agenda
✔ Leah on the Offbeat

Monster: UP TO DATE
✔ Villain

All Souls Trilogy:
✔ A Discovery of Witches
Shadow of Night
The Book of Life

Wayfarers:
✔ The Long Way to a Small, Angry Planet
✔ A Closed and Common Orbit
Record of a Spaceborn Few

Maya Angelou's Autobiography:
✔ I Know Why the Caged Bird Sings

Legacy of Orisha:
✔ Children of Blood and Bone (up to date)

Everless:
✔ Everless (up to date)

Skyward:
✔ Skyward (up to date)

- Ruin and Rising
- The Scorch Trials
- The Death Cure
- Ready Player One
- Fantastic Beasts and Where to Find Them
- Career of Evil
- Vicious
- The Lion, the Witch and the Wardrobe
- Prince Caspian

A non-goodreads challenge, created in part by a friend of mine. 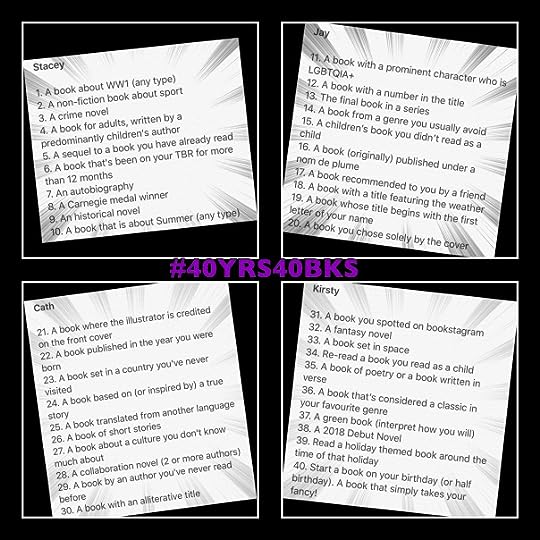 1. A book about WW1 - War Horse
2. A non-fiction book about sport - Federer
3. A crime novel - Career of Evil
4. A book for adults, written by a predominantly children's author - Lethal White
5. A sequel to a book you have already read - Goldenhand
6. A book that's been on your TBR for more than 12 months - Nerve
7. An autobiography - I Know Why the Caged Bird Sings
8. A carnegie medal winner - One
9. A historical novel - Lusus Naturae: A Lord Carlston Story
10. A book that is about summer - Aristotle and Dante Discover the Secrets of the Universe
11. A book with a prominent character who is LGBTQ+ - Simon vs. the Homo Sapiens Agenda
12. A book with a number in the title - Ready Player One
13. The final book in a series - The Death Cure
14. A book from a genre you usually avoid - The Lido
15. A children's book you didn't read as a child How To Write Really Badly
16. A book (originally) published under a nom de plume - The Way of All Flesh
17. A book recommended to you by a friend - Outliers: The Story of Success
18. A book with a title featuring the weather - Half of a Yellow Sun
19. A book whose title begins with the first letter of your name - Just So Stories
20. A book you chose solely by the cover - The Power
21. A book where the illustrator is credited on the front cover - Wuthering Heights
22. A book published in the year you were born - Good Omens: The Nice and Accurate Prophecies of Agnes Nutter, Witch
23. A book set in a country you've never visited - The Astonishing Color of After
24. A book based on (or inspired by) a true story - My Real Name Is Hanna
25. A book translated from another language - Beartown
26. A book of short stories - The Language of Thorns: Midnight Tales and Dangerous Magic
27. A book about a culture you don't know much about - Crazy Rich Asians
28. A collaboration novel - Sam & Ilsa's Last Hurrah
29. A book by an author you've never read before - The Dark Days Club
30. A book with an alliterative title - Ruin and Rising
31. A book you spotted on bookstagram - Children of Blood and Bone
32. A fantasy novel - Uprooted
33. A book set in space - A Confusion of Princes
34. Re-read a book you read as a child - Prince Caspian
35. A book of poetry or a book written in verse - The Poet X
36. A book that's considered a classic in your favourite genre - The Lion, the Witch and the Wardrobe
37. A green book - The Lie Tree
38. A 2018 debut novel - The Hazel Wood
39. Read a holiday themed book around the time of that holiday - Hallowe'en Party
40. Start a book on your birthday (or half birthday). - Fantastic Beasts and Where to Find Them

1. Will they, won't they Romance award - What If It's Us
2. Most unlike me... but still relatable, protagonist - An Absolutely Remarkable Thing
3. Most interesting method of time travel - The Girl from Everywhere
4. Edge of my seat award - Lethal White
5. Dullest mystery - Hallowe'en Party
6. Best world building - Skyward
7. Most anticipated sequel - Vengeful
8. Most atmospheric - City of Ghosts
9. Disappointing 'product of its era' award - Just So Stories
10. Cutest couple - Heartstopper: Volume One
11. Biggest picture plot - The Girl Who Saved the King of Sweden
12. Most beautiful writing - One
13. Protagonist with the worst luck - Day 7
14. Most varied read - Roar
15. The 'why was this so long?' award - Pick Three: You Can Have It All
16. The 'it just keeps getting better' award - Moxie
17. Richest character development - The Lowland
18. Most skimmable - Federer
19. Unique perspective award - War Horse

Physical: The Fever Code
Ebook: The Kill Order
Audiobooks: A Confusion of Princes and Goldenhand

3. Read a book by an author who is new to you with at least 16,000 followers on Goodreads.

7. Read a book with 16 Chapters or Short Stories.

8. Visit 16 of your Goodreads Friends, and read TBR book that you all have most in common.

9. Check out at least 16 Personal Challenges, and read a book another member has enjoyed this year. - Aristotle and Dante Discover the Secrets of the Universe

13. Read a book that is shorter than 160 pages. - Lusus Naturae: A Lord Carlston Story

14. Read a book that is or has been a Group Buddy Read.
Our Buddy Reads - Harry Potter and the Cursed Child - Parts One and Two

15. November 16th is International Day of Tolerance. Find a member who comes from a different culture than you and read one of their favorite books.

Movies or TV shows that were buddy reads in 2017.

2) Different race/nationality: The Astonishing Colour of After. The author is Taiwanese American and the protagonist is half-Taiwanese.

3) Different gender/race/sexuality: Aristotle and Dante Discover the Secrets of the Universe

4) Different race/nationality/disability/religion: Stories of Your Life and Others. Collection of short stories with a huge range of protagonists. Author is Chinese American.

5) Different nationality/race/historical era: Half of a Yellow Sun

7) Different race: Why I'm No Longer Talking to White People About Race

All ready to go! I haven't quite planned my January reading, but we will see where the month takes me :)

Janine wrote: "All ready to go! I haven't quite planned my January reading, but we will see where the month takes me :)"

Wishing you the best of luck with your goals and challenges Janine & a very happy reading/New Year!!

Thanks, Susy! Same to you.

Janine wrote: "Thanks, Susy! Same to you."