I am probably being very over-ambitious in the number of challenges I'm going to put here but I do love checking things off.

My mom and I are going to read a feminist book together every month.
And I'm going to try to participate in some buddy reads and book clubs.

1. A book published posthumously
- Persuasion by Jane Austen
- Northanger Abbey by Jane Austen
2. A book of true crime
- The Devil in the White City: Murder, Magic, and Madness at the Fair That Changed America by Erik Larson
3. A classic of genre fiction (i.e. mystery, sci fi/fantasy, romance)
4. A comic written and illustrated by the same person
5. A book set in or about one of the five BRICS countries (Brazil, Russia, India, China, or South Africa)
6. A book about nature
7. A western
8. A comic written or illustrated by a person of color
9. A book of colonial or postcolonial literature
10. A romance novel by or about a person of color
11. A children’s classic published before 1980
12. A celebrity memoir
13. An Oprah Book Club selection
14. A book of social science
15. A one-sitting book
- Grave Mercy by Robin LaFevers
16. The first book in a new-to-you YA or middle grade series
17. A sci fi novel with a female protagonist by a female author
- Voiceless by E.G. Wilson
18. A comic that isn’t published by Marvel, DC, or Image
19. A book of genre fiction in translation
20. A book with a cover you hate
21. A mystery by a person of color or LGBTQ+ author
22. An essay anthology
23. A book with a female protagonist over the age of 60
- What Happened by Hillary Rodham Clinton
24. An assigned book you hated (or never finished) 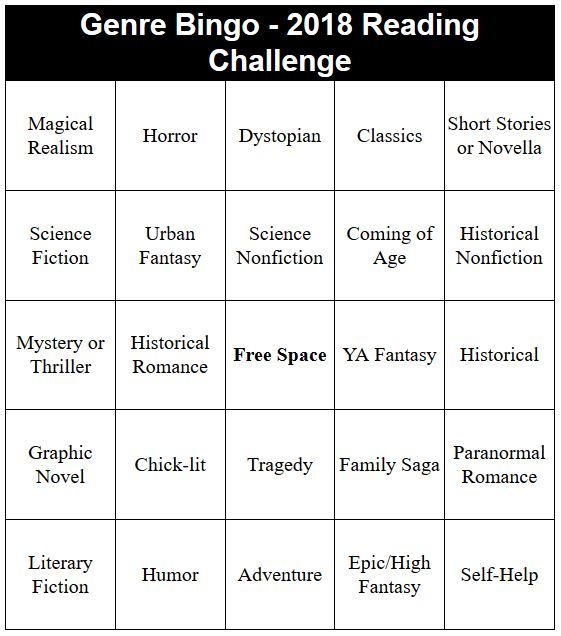 B1. Magical Realism
B2. Science Fiction - Binti by Nnedi Okorafor
B3. Mystery or Thriller
B4. Graphic Novel
B5. Literary Fiction - Sing, Unburied, Sing by Jesmyn Ward

I1. Horror
I2. Urban Fantasy
I3. Historical Romance - Grave Mercy by Robin LaFevers
I4. Chick-lit
I5. Humor

5. Read a book with "Yellow" or any shade of yellow in the cover (blond, chartreuse, canary, etc...).

14. Read a book with a color in the title of the book.

15. Read a book with a word describing colors in the title (rainbow, stripes, polka dots, etc...).

Clear the Shelves Challenge 2018
The books you read for this challenge are books that are already in your possession. Whatever you do for this challenge, you are not allowed to read a book obtained after December 31, 2017 unless you have read at least 5 books you already own.