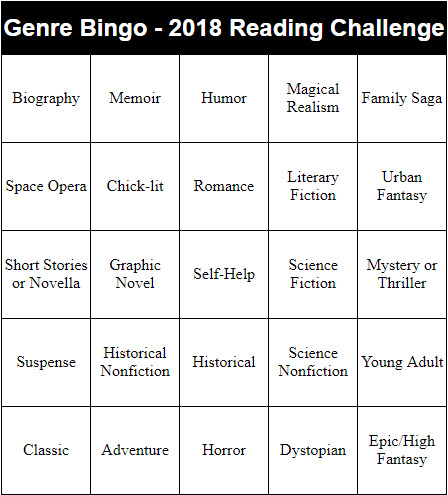 I'll be reading from Amazon's Most Read Nonfiction list from December 24.

One of the most popular reading challenges is back! The 2018 Popsugar Reading Challenge contains 40 tasks to broaden your horizons and 10 additional book prompts for the “hardcore” readers out here!

I met my goal! But I'm going to keep going to see how far I get.

1. Adriana's task: Read a book where a character makes a big change or with a librarian as a main character: How Dare the Sun Rise: Memoirs of a War Child, finished 3/2, ****

2. Amanda's task: Read a book which has been translated from another language: The Weight of Memories, finished 3/11, ****

3. Anna's task: Read a book where any character's name matches with any Disney character's name. The Moth Presents All These Wonders: True Stories about Facing the Unknown, finished 4/1, ****

4. Aparajita's task: Read a book written in a language that appears on the Indian currency, other than English. (Read a translation if you don't speak/read any of those languages).

6. Blagica's task: Read a book that intimidates you or the biggest book on your TBR Pile.

9. Cheri's task: Read a book that is about or takes place in the Middle Ages.

12. Daph's task: Read a book recommended by a friend or family member. Bad Blood: Secrets and Lies in a Silicon Valley Startup, finished 6/6, *****

13. Debra's task: Read a book about a serial killer or true crime. The Chickenshit Club: Why the Justice Department Fails to Prosecute Executives, finished 4/23, ****

15. Diana's task: Read a book by a Romanian author, about Romania's culture or about a famous Romanian.

17. Eggp's task: Read a book with a friend or participate in a buddy read: Troublemaker: Surviving Hollywood and Scientology, finished 2/2, ***

19. Gilraens's task: Read a by an author from one of those three countries (Netherlands, UK and New Zealand) or set in one of those countries. Space Opera, finished 4/23, ***

22. Gretchen's task: Read a book featuring a main character who is an identical twin.

23. Hemangini's task: Read a book where a writer/author is the main protagonist.The Bright Hour: A Memoir of Living and Dying, 6/30, ****

26. Jennifer B's task: Read a book about a big family. First They Killed My Father: A Daughter of Cambodia Remembers, finished 5/25, ****

27. Jennifer N’s task: Read a book where either the main character or the author has red hair. The Glass Castle, finished 8/31, ****

28. Jenny's task: Read a book about surgery or the history of medicine.Dreamland: The True Tale of America's Opiate Epidemic, finished 7/28, *****

29. Jessica's task: Read a book that takes place somewhere that begins with the letter M or someplace where the winters are very cold. Call Me by Your Name, finished 4/6, ****

31. Kadijah Michelle's task: Read a book about a Muslim woman.

32. Kristin's task: Read a cookbook with stories or a book about cooking.

33. Kylie's task: Read a book about someone who makes shoes, a book where shoes have an important role, or a (micro-)history of a shoe designer/brand.

39. Mie's task: Read a book that includes or features a party. The Daily Show: An Oral History as Told by Jon Stewart, the Correspondents, Staff and Guests, finished 4/12, ****

41. Nikki's task: Read a book where the main character gets transported to a different time or place. The Merchant and the Alchemist's Gate, finished 5/12, *****

42. Rachael's task: Read a book published between 1990 and 1999. The Oz Principle: Getting Results Through Individual and Organizational Accountability, finished 5/22, **

43. Rebecca's task: Read a book where the main character enjoys creating art or is a teacher: My Own Words, finished 1/26, ****

44. Rique's task: Read a book, fiction or historical fiction, taking place anywhere from the Great Depression through WWII (1929-1945). The Woman Who Smashed Codes: A True Story of Love, Spies, and the Unlikely Heroine who Outwitted America's Enemies, finished 3/21, *****

45. Sarah's task: Read a book that is centered around the mafia/mob.

47. Susy's task: Read a book in your mother language/tongue. Moneyball: The Art of Winning an Unfair Game, finished 1/20, ***

Must reads in January:

1. Crime and Punishment
2. How Dare the Sun Rise: Memoirs of a War Child
3. Moneyball: The Art of Winning an Unfair Game
4. The Bear and the Nightingale
5. Monstress, Vol. 1: Awakening

1. How Dare the Sun Rise: Memoirs of a War Child
2. Who Fears Death
3. Dawn
4. Things Fall Apart
5. Why I'm No Longer Talking to White People About Race
6. Binti
7. An Unkindness of Ghosts
8. We Were Eight Years in Power: An American Tragedy
9. The Last Black Unicorn
10. Citizen: An American Lyric
11. Homegoing
12. Zahrah the Windseeker
13. Sing, Unburied, Sing

1. Europe in Autumn
2. Why We Sleep: Unlocking the Power of Sleep and Dreams
3. Fresh Off the Boat: A Memoir
4. The Poppy War
5. How to Live Safely in a Science Fictional Universe
6. No-No Boy
7. A Tale for the Time Being
8. Reel Inequality: Hollywood Actors and Racism
9. The Rape of Nanking
10. The Lowland
11. Monstress, Vol. 2: The Blood
12. We Have No Idea: A Guide to the Unknown Universe
13. First They Killed My Father: A Daughter of Cambodia Remembers
14. Pachinko
15. One Day We'll All Be Dead and None of This Will Matter

1. The Demon-Haunted World: Science as a Candle in the Dark
2. Molly's Game: From Hollywood's Elite to Wall Street's Billionaire Boys Club, My High-Stakes Adventure in the World of Underground Poker
3. Hamlet
4. Extreme Ownership: How U.S. Navy SEALs Lead and Win
5. Circe
6. Children of Blood and Bone
7. Pachinko
8. The Lowland
9. Bad Blood: Secrets and Lies in a Silicon Valley Startup
10. One Day We'll All Be Dead and None of This Will Matter
11. So You Want to Talk About Race
12. The Fire Next Time

Tasks to Stretch Your Comfort Zone
-- Let's Get It On: Read a book that features falling in or out of love.
-- Take Pride: Read a book written by an LGBTQIA author or that features an LGBTQIA character. Simon vs. the Homo Sapiens Agenda, 7/1, ****
-- Read the World: Read a book that takes place in a country--or focuses on a culture--other than your own. One Day We'll All Be Dead and None of This Will Matter, finished 6/2
-- Diversify Yourself: Read a book by an author of color. So You Want to Talk About Race, finished 6/13, *****
-- You Have a Lovely Accent: Read a book that was translated from another language. A River in Darkness: One Man's Escape from North Korea, finished 8/22, ****
-- Won't Be Long: Read a collection of short stories or essays. The Fire Next Time, finished 6/16, ****
-- Poet at Heart: Read a book of poetry
-- My, What Big Teeth You Have: Read a book that puts a spin on a well-known fairy tale.
-- High Noon: Read a classic or contemporary Western.
-- TBRing It: Read a book from the bottom of your TBR pile. No-No Boy, finished 6/6, ****
-- Unshelve It: Read a book that's been sitting on your Goodreads Shelves for a while. The Demon-Haunted World: Science as a Candle in the Dark, finished 7/15, ****
-- Childhood Reboot: Read a Choose-Your-Own-Adventure novel. Neil Patrick Harris: Choose Your Own Autobiography, finished 8/5, ****
-- Listen to Me: Listen to an audiobook The Bright Hour: A Memoir of Living and Dying, 6/30, ****

1. Record of a Spaceborn Few
2. The Clay Girl
3. Daemon
4. The Undoing Project: A Friendship That Changed Our Minds
5. The Boys in the Boat: Nine Americans and Their Epic Quest for Gold at the 1936 Berlin Olympics
6. Molly's Game: From Hollywood's Elite to Wall Street's Billionaire Boys Club, My High-Stakes Adventure in the World of Underground Poker
7. Boy's Life
8. Leading While Green: How Emerging Leaders Can Ripen Into Effective Leaders
9. Dreamland: The True Tale of America's Opiate Epidemic
10. Never Split the Difference: Negotiating As If Your Life Depended On It
11. Educated: A Memoir

1. The Boys in the Boat: Nine Americans and Their Epic Quest for Gold at the 1936 Berlin Olympics
2. Last Chance to See
3. Neil Patrick Harris: Choose Your Own Autobiography
4. The House of the Spirits
5. Crime and Punishment
6. Hard-Boiled Wonderland and the End of the World
7. A River in Darkness: One Man's Escape from North Korea
8. Extreme Ownership: How U.S. Navy SEALs Lead and Win
9. The Future is Blue
10. Molly's Game: From Hollywood's Elite to Wall Street's Billionaire Boys Club, My High-Stakes Adventure in the World of Underground Poker

1. Foundryside
2. The House of the Spirits
3. Crime and Punishment
4. Girl, Wash Your Face: Stop Believing the Lies about Who You Are So You Can Become Who You Were Meant to Be
5. Six of Crows
6. I'll Be Gone in the Dark: One Woman's Obsessive Search for the Golden State Killer
7. Tomorrow Will Be Different: Love, Loss, and the Fight for Trans Equality
8. The Final Empire

1. The Boys in the Boat: Nine Americans and Their Epic Quest for Gold at the 1936 Berlin Olympics
2. The Monster Baru Cormorant
3. The Consuming Fire
4. Vengeful
5. Foundryside
6. What Happened
7. Anne of Green Gables
8. All You Can Ever Know: A Memoir
9. Brain Storms: The Race to Unlock the Mysteries of Parkinson's Disease

Options for November
1. The Monster Baru Cormorant
2. Rabid: A Cultural History of the World's Most Diabolical Virus
3. Persepolis: The Story of a Childhood
4. Brightness Falls from the Air
5. Manufacturing Consent: The Political Economy of the Mass Media
6. Emma
7. Extreme Ownership: How U.S. Navy SEALs Lead and Win

1. What the Eyes Don't See: A Story of Crisis, Resistance, and Hope in an American City
2. Guards! Guards!
3. Major Pettigrew's Last Stand
4. The Snowman
5. Cosmos
6. Brightness Falls from the Air
7. Extreme Ownership: How U.S. Navy SEALs Lead and Win
8. Uzumaki: Spiral into Horror, Vol. 1
9. Blood Meridian, or the Evening Redness in the West
10. A Clockwork Orange or The Handmaid's Tale