CEO'S OFFICE: Not one to spare expenses, or really know how to, Ji Haneul turned his father's simple office into an extravagant living space just for himself. With floor to ceiling high windows and intricate designs decorating the ceiling and walls, Haneul truly lives and works like he's worth billions. The only offices on the executive floor belong to him, his vice president and his secretary, which is close to his. Ji Haneul has a room inside his office that is a bedroom for the days that he stays overnight because of the workload and he also has a closet and a private bathroom. 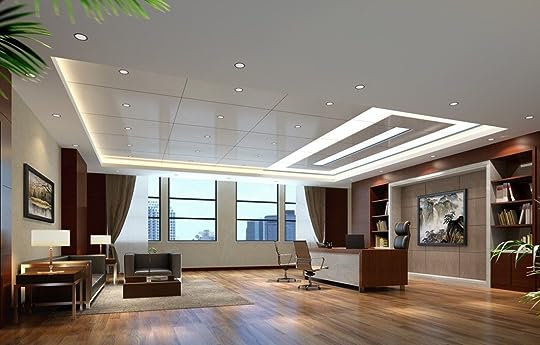 Haneul hoped his day would start to look up once he relaxed behind his polished desk, kicked his feet back, and watched cute kitten videos on the tv screen behind his office chair. But nope.... not at all.

That idea was hurled out the window when he heard screaming and people calling his name the moment he stepped foot into Abstrego. Apparently, he needed to stop his spontaneous vacations and actually call in when he decided to not show up to work. Oh well, it wasn't like anyone could fire him. Haneul tried his best to ignore his workers and made a bee line to the elevators that would take him to his office. He knew all the paperwork would be sent to his desk immediately and his secretary would schedule meetings to make up for lost time. Haneul should have stayed behind to address the people's questions and take all the paperwork from their hands in person but he did not feel like being scolded by those imbeciles. His vice president, Iseul would sure give him enough of that. There was no doubt in his mind that Iseul was waiting in his office for him and Haneul almost stopped the elevators so he could get out of abstrego at that thought.

The elevators stopped at the executive floor but the doors remained shut. Only at the beep caused by Haneul scanning his badge did they finally open. Only a select few had a badge that allowed them on this floor and the doors would only open with direct permission from the people on this floor. Haneul prepared himself to be bombarded by complaints from his dear friend and annoying vice president and he opened the glass doors to his office and walked inside the luminous room.

Frankly, Iseul was exhausted. He had been at work for hours on end, trying to get through the heavy workload that situated itself on his desk due to Haneul's recent disappearance. Not only did he have to deal with clients, he also had to appease Chairman Ji who was bombarding him with questions about Haneul. Iseul let out a weary sigh when he heard his phone ring yet again for probably the millionth time today. Praying it wasn't Haneul's father, he looked at the caller ID. Unfortunately, God didn't seem to be on his side today.

Answering the phone, he was instantly greeted with the angry voice of the chairman and he rolled his eyes in annoyance. "Sir, I am not responsible for Haneul's actions." He pressed this fact in a harsh tone, honestly too tired to care how his tone sounded. "Last time I checked I am the vice president of the company, not someone who reports Haneul's every action to his father and quite frankly, Haneul is a fully grown adult." He spoke these words monotonously, like he had said it a hundred times before. "Now I have work to do. Goodbye." Ignoring the shouting on the other end, he hung up the phone. Running a hand through his hair, he closed his eyes for a second. "I'm going to kill him when he comes back." He said this to himself, too absorbed in his frustration to realize anyone was in the room.

It was hard to miss the harsh conversation that came from his office. Iseul's conversation quickly piqued HaneuI's interest and he leaned his shoulder against the doorframe. Haneul sported a cocky grin and an arched eyebrow, Suprised at the tone Iseul used with the chairman. He allowed Iseul to finish and hangup the phone before he made this presence known, stepping further in his office. " My father will not be too pleased with the way you spoke to him." Like the rest of him, his tone was cocky and arrogant ; teasing, almost .

This whole ordeal was his fault and he couldn't help but find enjoyment in that.

Haneul plopped himself down on one of the couches in the room and sighed loudly, making Sure Iseul was aware of how disdainful Haneul was for being here. "lets skip the yelling part okay?" he groaned, knowing Iseul too well to know what was about to come next. " My vacation was great, by the way. I think I will post the pictures soon." That last statement was an added measure just to irritate his vice president, just for his own amusement.