Awesome! Did you have ideas in mind for this?

Not entirely, since the concept of the Hunger Games is pretty plain and simple lol I figured most of the idea would come from the fact that they would need to be from separate districts, since it's gonna be MxM you said you wanted. So there's that.

Also if you wanted to kinda play more than one character, since there does have to be 24 people in the games. You know, just sorta basic stuff that we wanna do, the overall plot of it stays mostly the same (:

Yeah that is true

We can definitely play more than one character we could also play characters not directly in the games like people in the capitol, district 13 if we wanted. Depends on how big we're willing to go lol.

Yeah, exactly (: we could have some people go to where the old district 13 was, where ever it was lol I did only watch the first two movies so just be careful not to spoil anything for me, okay? (: and then when our guys get out of the games, maybe some people who sorta took refuge where district 13 was and the capital could come together, wanting to stop the games and our guys get involved in it? Maybe?

My lips are sealed. Yes that'd be great, pretty much exactly what I was thinking! Maybe at first they don't want to because they just escaped from the capitol and don't want to get involved so soon, but then somehow they get dragged into it.

And yeah, sounds good to me! It'll probably be from the fact that their family is part of the people who are in district 13 or something like that.

As for the arena, do you want it to be similar to the one from the first or the second movie? Or kinda make it up?

Either or is fine with me. We could do like a desert or tundra arena or maybe something with mountains would be cool as well

I kinda like the mountains idea (: put some climbing skills to use haha so probably like forest area from the first one just with a bunch of mountains?

Awesome mountains it is then. Yeah probably and the cornucopia will be in the middle of a valley probably

Anything else you think we should go over?

Hmmm not really everything else can be decided as we go

I think I'm probably gonna make the 11 other characters, just not give them a whole bio, just a name, age, and a picture, my main guy will be a more in depth character bio. You certainly don't have to do that, but it'll just sorta give me half of the people to control, you know? Plus most of them will die in the cornucopia anyways xD

Alright sweet! ^^ I'll probably have mine up today, if not, sometime early tomorrow :3

Legally Changed Name: Jamie Mychell Reed-Moore
Reason for changing first name: Jamie wanted to take away the Russian spelling of his name because many people were confused on how to pronounce his name growing up...
Reason for changing middle name: Mychell is his grandmother on his mother's side name and he wanted that included in his name instead of his grandfather.

Nickname(s): Whatever your character calls him, if anything

Star Sign: Gemini
Spirit Animal: Wolf
Religion: Wicca
(view spoiler)[Wicca is a modern pagan, witchcraft religion. It was developed in England during the first half of the 20th century and was introduced to the public in 1954 by Gerald Gardner, a retired British civil servant. Wicca draws upon a diverse set of ancient pagan and 20th century hermetic motifs for its theological structure and ritual practice.

Wicca has no central authority. Its traditional core beliefs, principles and practices were originally outlined in the 1940s and 1950s by Gardner and Doreen Valiente, both in published books as well as in secret written and oral teachings passed along to their initiates. There are many variations on the core structure, and the religion grows and evolves over time. It is divided into a number of diverse lineages, sects and denominations, referred to as traditions, each with its own organizational structure and level of centralisation. Due to its decentralized nature, there is some disagreement over what actually constitutes Wicca. Some traditions, collectively referred to as British Traditional Wicca, strictly follow the initiatory lineage of Gardner and consider the term Wicca to apply only to similar traditions, while newer eclectic traditions do not.

Wicca is typically duotheistic, worshipping a Goddess and a God. These are traditionally viewed as the Moon Goddess and the Horned God, respectively. These deities may be regarded in a henotheistic way, as having many different divine aspects which can in turn be identified with many diverse pagan deities from different historical pantheons. For this reason, they are sometimes referred to as the "Great Goddess" and the "Great Horned God", with the adjective "great" connoting a deity that contains many other deities within their own nature. These two deities are sometimes viewed as facets of a greater pantheistic divinity, which is regarded as an impersonal force or process rather than a personal deity. While duotheism or bitheism is traditional in Wicca, broader Wiccan beliefs range from polytheism to pantheism or monism, even to Goddess monotheism.

Wiccan celebrations follow both the cycles of the Moon, known as esbats and associated with the Goddess, and the cycles of the Sun, seasonally based festivals known as Sabbats and associated with the Horned God. An unattributed statement known as the Wiccan Rede is a popular expression of Wiccan morality, although it is not accepted by all Wiccans. Wicca often involves the ritual practice of magic, though it is not always necessary. (hide spoiler)] 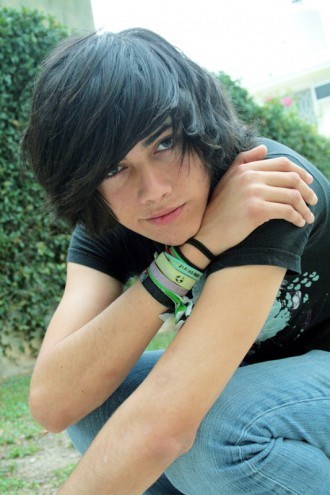 //Hair Color// Black, original blonde
//Eye Color// Hazel, green in the dark and blue in the light
//Height// 6'7
//Weight// 195 lbs
//Skin Tone// Pale
//Skin Texture// Rough in some areas, but smooth as well
//Scars// Many small scars going up both his wrists to the underside of his elbows

//Body Type//
Jaime has a very tall form, and he often wears baggy, long sleeved shirts, giving the impression that he is overweight. However, he is actually rather skinny, but he does have muscle to him. He has a six pack and a very defined waist and back arch, these two things giving him a feminine quality. He is always cleanly shaven, that means his legs, arms, underarms and, um, southern regions.

Speaking of his southern regions, he doesn't spend a lot of time measuring the size of his, well, manhood. However, he is rather...mature for his age. Okay, he's a bigger in the southern region then most guys his age. Well, most guys in general. Let's just say he has a feature down there to brag about. The best way to describe him is a muscular lanky kind of guy.

Name:Beck
Age: 13
District: 11
How In the Games: Volunteer
Appearance
http://www.stylisheve.com/wp-content/...

Nickname(s): Whatever your character calls him, if anything 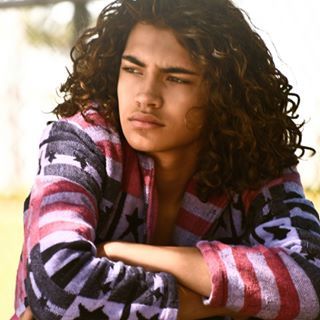 Awesome ^_^ so where should we start?

Well, I was thinking either right before the Games or if you want we can do some of the pre Games things like them training, sorta meeting for the first time, having their interview with Ceaser, that kinda thing.

We could just start right before the games

Alright, so basically right as they're going into the arena?

Alright kewl (: I can start us off if you'd like, but it would have to be later. I gotta get ready for work. So if you want to start it you can :3

Oh okay haha well I can start it then, I have some time ^^

"Be careful out there, alright? You didn't do a lot of the training I wanted you to, but I know you have the skill in you," Lawrence said to Jamie as he saw him off. The teenager looked at him when he spoke, nodding his head a bit, but he said nothing back. He didn't become super close with his stylist this past week. Just sorta tolerated the man. He stepped into the glass tube, it closing up and within a few seconds, he was ascending up. Taking a deep breath and letting it out slowly, he closed his eyes when he was suddenly met with the blaring light and he moved his hand up over his face. Opening it, he came face to face with the cornucopia and the 23 other kids that he would need to compete against. No one really moved, waiting for the countdown from 10 to get down to 0 so they could start...

Rowan was alone he'd practically begged his stylist not to go in with him, for this he wanted to be alone, of course they were still just outside the door making sure he got into the tube that would most likely take him to his death, but there was only so much Rowan could do about that. Finally it was time reluctantly Rowan stepped into the tube within seconds he was moving upwards. Finally he was above the surface and could get a good look around him, the numbers were barely registering as he took in the sight of the mountain. The numbers were slowly sounded off until the announcer reached zero and then chaos ensued. Rowan took off towards the cornucopia his mentors were probably screaming profanities at him through their screen, but he could care less. An ax just outside the pile up had caught his eye and he wasn't going to give that up without a fight. On his way he picked up a light backup before quickly grabbing the ax and darting away before anyone would know he was there.

Jamie looked around at the other children around him, a lot of them getting into a running stance so they could beeline it for the cornucopia. He remained still though and when the count went down, everyone started running. He watched as they all went towards the cornucopia, he however did not. He started running in the direction of the forest, he was a fast runner, one of the skills he was just good at. He noticed a backpack and started it for, hearing the sounds of some kids starting to fight. He glanced over in time to see a blonde girl that he recognized from district 1 take down a girl he knew, Rachel, from district 12. He had tried to teach Rachel some fighting skills as she was learning. He turned his head as he saw the blood start to drip down her body and he made it to the backpack just in time for a knife to be thrown at him. He looked up to see who had thrown it when another was shot at him. Diving for the backpack, he held it up to his chest before it could get him, it getting stuck. Grunting a bit as he stood up, he quickly took it out of his backpack, seeing the same person who had just thrown the knife at him, a girl with black hair, throw one at another guy from district 6, getting him in the chest. Before he could witness another death, or before he could be at risk for getting struck down, he quickly ran towards the forest with his backpack and knife.