Yes, you read it right. I guess I've lived a sheltered life, but until recently, I didn't know this phenomenon existed. But listen, if you've got the back cleavage, I'm not judging you. I'm not persecuting you. But you've got to cover that shit up. If your ass was in the front, you sure as hell wouldn't showcase it; you'd cover that abberation. Same rules apply with back cleavage.

This is difficult for me, because it goes against every instinct in me to complain about cleavage. But there's nothing right about this. Mother Nature must soil herself in agony at the mere thought of it. Because she never intended it.

I'm also pissed off at goodreads, because it's been slow and unreliable and shitty lately. If they can't fix it, I'm not paying my dues this month.

P.S. I also hate public television, temperatures over seventy degrees, people who act like they're doing me a personal favor when I ask them to do their job, bitchy in-laws, moron doctor receptionists who can't code bills correctly and ask me to pay them money for things that my insurance covers, co-workers who inexplicably expect me to do their jobs for them, drivers, pedestrians, dogs, cats, mice, democrats, libertarians, independents, republicans, socialists, communists, torries, whigs, buses, trains, cars, people I work for, people who work for me, people I've never met, Quizno's and.................wait for it.................it's coming...................almost here ........HIPPIES.

Word. Especially in regards to 50+ yr old hippy chicks who have convinced themselves that there is nothing more on this God's Earth that I need to see more than their puckered, unshaven, stench encrusted butt crack. Please. For the love of Humankind. Die.

NB, that's the thing - it wasn't butt crack; it was shoulder blade cleavage. The thought still haunts me.

Now you want me to have nightmares.

What about the real issue, Tambocita? Won't you join me in the fight against back cleavage? This is a serious issue, and if we don't make a stand now, it will just snowball.

Ok Rusty, I'm taking revenge for the back cleavage.

Bunny, you might want to skip this thread. I know you hate distasteful pictures.

How about subway?
[image error]
Itchy... But I think this is not enough yet. Need some more solid material for nightmares...

This guy might make the cut. I feel bad for his jewels. Must be pretty tight down there :/
[image error]
And there's the "Hello kitty!"
[image error]

Take that back cleavage!

Oh Kasia. That suntan picture has got to be fake! This picture doesn't even come close to comparing to yours except for the fact that I saw this in person. You cannot completely tell but this guy has one hell of a mullet and is wearing loafers without socks.
[image error]

Do you think he's a magician?

Gretchen wrote: "...You cannot completely tell but this guy has one hell of a mullet and is wearing loafers without socks."

Gretchen wrote: "That suntan picture has got to be fake!"

...or a very large leprechaun.

Did Rusty post a pic of back cleavage? Or is this all abstract?

It's only a mental image at this point Doni, and it's already been petitioned to keep it that way, I see ;)

You mean you terrorized him into keeping it that way, P-girl. He's probably wondering wtf kind of pics you'd post if he did do it.

Am I really such an evil, terrorizing bitch? Maybe I should tone it down a little. That probably would be wise. 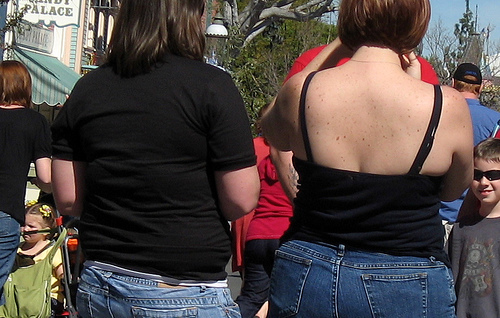 And lets kick it up a notch shall we?: 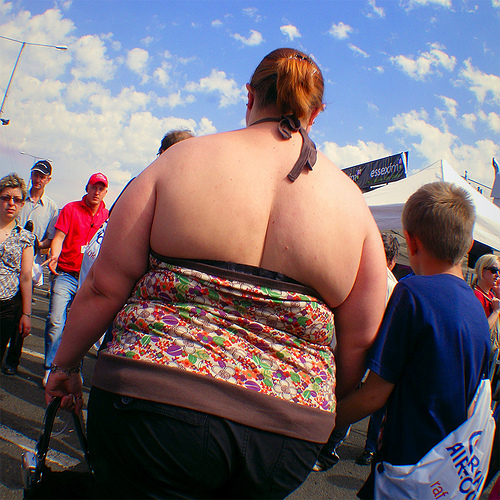 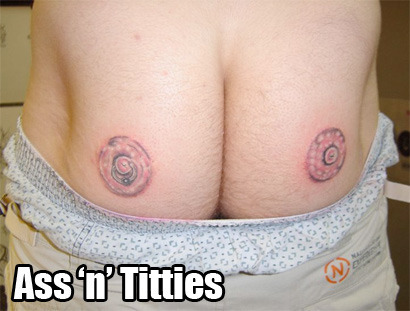 You've nailed it with #2. #3 would be a nice ass if not for the tattoos and the ass-crack-hair. Nonetheless, interesting finds.

I know I coming to this super late but I'd just like to thank Rusty from bringing up the elephant in the room...."torries"

Somehow I missed this post! A call to arms? Against back cleavage. I will do what I can to avoid it for myself, but what can I do about others, Rusty? Besides, you know there's a fetish for everything. I don't want to deny the back cleavage fetishists their pleasure.

I will do what I can to avoid it for myself, but what can I do about others, Rusty?

I hadn't really thought about that. Uuuuhhhmmmm, hand out sarapes, as needed?

Montambo wrote: ". I don't want to deny the back cleavage fetishists their pleasure."

There's knee cleavage there too. I find that amazing. Why on earth do people do that to themselves? WHY?

Why on earth did you do this to us?

I think it's cute in a way. Wiggles.

Such Horseshit. People do that to themselves because of high fructose corn syrup. Eat all the time. Engineered that way. Born to lose. Another reason for going organic. I ate a peach today with no chemicals this morning, boy it was good. Juicy. Got my shorts all wet. All the parts that would be commented on, manhood. Had to do laundry. It was copacetic. At 40, I have an enviable body, an eight pack, drives my my wife wild, everyone else if shown. Never work out. Sanding and painting a porch this eve. Nice fluctuating flabby ass. Go organic, tardos. Hippies rule.

David wrote: "I ate a peach today with no chemicals this morning, boy it was good. Juicy. Got my shorts all wet. "

And people wonder why I hate hippies. What a load of shit.