Mod
Share the SFF news that is of interest to you with the group and maybe end up on the next S&L Podcast!

Yeah, I explained why here

The ideal patron for Sword & Laser...

(I will now crawl back under a rock).

I found this really interesting chart of the history of science fiction. You can zoom in and out to see the details. Looks like a Cthulhu

^I had the hardest time finding Burroughs, but overall pretty neat.

Do not know if this has been posted before, but there is a new website for Fantasy fans.
https://fantasy-hive.co.uk/
Has a Tor.com look to it

The adaptation of George R.R. Martin’s Nightflyers is coming to Syfy in the US and Netflix everywhere else.

I read it a few days ago, the Fantasy hive website listed some SF books as their most awaited fantasy books in 2018 so.... Yeah... not sure :p

Linda Hamilton of Terminator fame will be in the new time travel movie Curvature. The trailer on io9 looks damn cool.
https://io9.gizmodo.com/terminator-st...

Rumour that The Blade Itself is being made for TV/Film...

The next project by Dennis Villeneuve, director of the superb Arrival and better-than-expected Bladerunner 2049, is going to be a new adaptation of Dune. He says his goal is “Star Wars for adults.”

BTW, if you haven’t seen the documentary Jodorowsky’s Dune, I highly recommend it. That guy was a crazy person, and the influence of that failed project was felt in most of the sci-fi movies released in the 1970s and 80s, including Star Wars.

Trike wrote: "BTW, if you haven’t seen the documentary Jodorowsky’s Dune, I highly recommend it. That guy was a crazy person, and the influence of that failed project was felt in most of the sci-fi movies released in the 1970s and 80s, including Star Wars."

And then read The Incal. The comic that resulted after Jodorowsky’s version of Dune fell apart.

In my opinion they are both deserving of the Best Picture award, and I think Get Out has a decent chance of actually winning.

I think Richard Jenkins is a serious contender for Best Supporting Actor for The Shape of Water.

Logan has been nominated for Best Adapted Screenplay. It won’t win (that will be Call Me By Your Name), but it’s cool that a superhero film got a nod.

ETA - The Shape of Water has 13 nominations in all.

Winds of Winter is coming......September 6th.

I'll wait for a more official announcement from Martin and/or his publisher and not a leak. That could also be a tentative date that may slip. It's happened to plenty of books that are far less complicated/long in coming.

I would not trust The Sun as far as I could throw it... Murdoch trash rag. The only value in it is as a source of paper to start a fire.

EDIT: The story came from The Strand bookstore's website on NYC. Several other sites reported the same story, i.e. http://www.ibtimes.com.au/winds-winte...

EDIT: The story came from The Strand bookst..."

I'll believe The Winds of Winter is out when I see it on bookshelves.

I agree with Dara

RIP Ursula K. Le Guin, one of the greatest authors who ever lived. 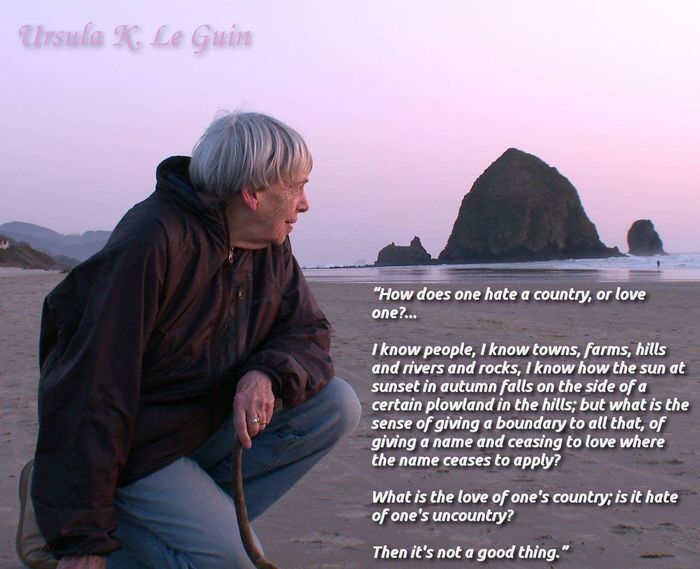 Anyone else pick up that Google are now doing audiobooks?

There's no subscription option like Audible which Google are touting as a good thing (personally I get quite excited when the credits turn up), and there's no whisper-sync which I don't use much myself but I know others do.

I'm sure the ongoing conflict between Amazon and Google is going to play into this at some point, just as long as they don't start pulling apps from each others services then having another option out there can only be a good thing (surely?).

Not bought anything from them yet so no idea what the service, quality, usability is going to be like.

Yay! It looks like MaddAddam could be back on! (And yes, I call these Sci Fi even though Ms Atwood doesn’t like the term.)

A really interesting YA genre fiction pick made it in to ' Canada Reads' this year! By a Metis author too :)

The Marrow Thieves by Cherie Dimaline

I'm going to pipe Deckard's apartment through my own apartment. It's gotta be better than my current "clanking steam radiator and screaming Russian neighbors."

I can't see any mention of it around here so here's a link to a story about the HBO version of Fahrenheit 451 by Ray Bradbury. https://nerdist.com/michael-b-jordan-...
It's a film starring Michael B. Jordan, Sofia Boutella, and Michael Shannon which is due to air on HBO in the spring of this year.
Here's another link to the teaser trailer https://www.youtube.com/watch?v=JzAwg...

It looks like Hugo Nominations are open, both for last year's works, and for 1942 works. They are calling it the "1943 Retrospective Hugo Awards", but that's like how they call this years the 2018 Hugo awards for 2017 works. If you are eligible to nominate, you have until March 16th to get those in, so that should hopefully be plenty of time to think on it.

You can nominate The Sword and Laser podcast in the best Fancast section. There is a need to double the amount of nominated votes from last year to become a finalist. WorldCon 76 is being held in San Jose, Ca. You need to be a supporting member or have gone to Worldcon 75 to be involved .

Even more Star Wars films on the way from the Game of Thrones creators, David Benioff and D.B. Weiss, separate from the main Skywalker saga, and unrelated to the recently announced Rian Johnson trilogy.

StoryBundle is offering a Black Narratives Bundle that has some great stuff, including one previous S&L read and another by the same author.

The initial titles in the Black Narratives Bundle (minimum $5 to purchase) are:

To Raise a Clenched Fist to the Sky: The Panther Chronicles, Book One by T. Thorn Coyle
Skin Folk by Nalo Hopkinson
Angelborn by L. Penelope
Echo by Alicia Wright Brewster

If you pay at least the bonus price of just $15, you get all four of the regular titles, plus SEVEN more!

Even though I've already read The Salt Roads and Redemption in Indigo, I went for this one!

Tomi Adeyemi's book "Children of Blood and Bone" is coming out 3/6, and it looks amazing. This video of her opening her copy is fantastic: https://twitter.com/tomi_adeyemi/stat...

April wrote: "Tomi Adeyemi's book "Children of Blood and Bone" is coming out 3/6, and it looks amazing. This video of her opening her copy is fantastic: https://twitter.com/tomi_adeyemi/stat..."

A friend of mine who runs a town library in Maine was raving about that book the other day. She also linked to that video. Getting a signal boost from Stephen King is pretty sweet.

Mod
Titan Books is releasing 3 Firefly novels. Starring our loveable bunch of rogues and browncoats. These will be the first books written for the franchise with original storylines.

The first will be released in October, 2018 with 2 more scheduled for release next year (March and October 2019)

The novels will be written by Nancy Holder, who has written over a dozen Buffy the Vampire Slayer tie-in novels; Age of Heroes author James Lovegrove; and Tim Lebbon, who has written the movie novelizations for 30 Days of Night and The Cabin in the Woods, as well as tie-in fiction for the Star Wars, Alien, and Predator franchises. Joss Whedon will serve as consulting editor.

Tassie Dave wrote: "Titan Books is releasing 3 Firefly novels. Starring our loveable bunch of rogues and browncoats. These will be the first books written for the franchise with original storylines."

My Own Kind of Freedom: A Firefly Novel by Steven Brust was written on spec and submitted for consideration as an official Firefly novel, but was rejected. Brust released it as an ebook which you can download in epub/mobi/pdf formats at

So happy to see R.A. Salvatore announced more Drizzt books( who didn’t see that coming lol). It’s a brand new trilogy starting with a book called Timeless on Sept 18th. I’m a few books behind but will easily catch up before the new one comes out. Also this year is the 30th anniversary of the The Crystal Shard.

Orbit announces the publication of original Culture drawings from the Estate of Iain M. Banks.

Wow, really looking forward to the publication of this book!

A prequel to The Three-Body problem is coming out in March (at least in Australia), called The Redemption of Time, though it looks like it's by a different author? Baoshu? Though I think the translator is still the same...
Also a new Raymond E Feist book, in a new series. It doesn't look like he is a previously read author on here. A little surprised! I think I'll head over to March Madness to make a nomination.