The crew will be posted here using the creation form. No one may make a crew until the captain has been made.

Name: Rhiannon “Ry”
Age: a little over three months
Gender: female
Appearance:
((this is just how I imagine Mauerfüchse, based on how the butterfly looks))
The back and the top of the wings are light grey mottled with darker grey and brown. The wings have a pattern of lines and circles that can barely be seen yet but as Ry grows they will darken into a deep brown. Towards the wingtips the grey-brown colour changes to ochre-orange. Thanks to this colouration a Mauerfuchs can blend in with rocks of the right colour and become invisible from above.
The belly has a light brown, reddish colour with darker stripes while the undersides of the wings have a flamboyant orange-yellow colour. The wingpattern is similar to that on top though less detailed and with broader lines and less circles.
Ry’s face has distinct patterns: a line across her lower jaw and one bellow each eye. Since she is a young dragon her horns and the frill across her back are barely visible.

Personality:
Ry is very curious, which is of course normal for a dragon her age. Despite her smallness and her young age, she likes to take things into her own claws. She cares greatly for Gen and loves to hear stories about her family, especially those involving dragons.
So far her attempts to “draw” (using one claw and whatever surface available) have ended in mixed results.

Family:
Ry does not know her family personally but apparently her father Thorsten and her mother Walburga are part of the cadre that upholds the communication between Britain, Prussia and Bavaria.

History:
Her egg was a part of an exchange with the aim to strengthen the bonds between Britain and the German states. The egg was kept in London and Ry hatched there. Despite all the hopeful faces around her she decided to get out of wherever she was. On her escape she met a girl who looked as if she was sneaking out of the covert.
They talked and Ry thought that maybe this place wasn’t so bad; she chose to stay with Gen.

Other: Ry speaks English and German.

Mod
Captain –
Name: Genevieve “Gen” Catherine Evans
Age: 21
Rank: Captain
Gender: female
Appearance:
Gen has her mother’s auburn hair and her grandfather’s brown eyes – both of which she appreciates very much. What she does not like is how small she is.

Personality:
Being the youngest child means that she had to be loud and bold to be noticed. Both of those characteristics have faded to form the basis for her confidence. She is quite good at what is called “confident behaviour despite total ignorance” and can improvise her way through many situations.
Throughout her youth Gen has perfected the shield of ice-cold politeness when it comes to people she does not like. But Gen can be a very caring person around the people – humans and dragons – she loves.

Family:
Nobody is quite sure how it happened, but some time before the Napoleonic Wars Christopher Vaughn and Laura Evans met and fell in love. Christopher was the son of a rich trader helping his father, Laura had just been chosen by a hatchling and was now captain. They met in Cardiff where Laura had planned to go looking for a gift to present to Septimus.
As Laura needs an heir for her Longwing, and to avoid confusion, they decided that Christopher would take her last name when they married. He is now a trader and lives in Cardiff while Laura fights to keep Britain independent.
Together they have three children: Grace Charlotte Evans who is currently a Lieutenant aboard an Anglewing, William “Will” Meriwether (the parents were really into middle names) who helps out with the father’s business, and Gen.
Sadly Christopher’s family severed all connections when he married an aviator.

History:
Gen grew up in Cardiff and lived there with her father while her mother was mostly away. She learned quickly to not speak about her absent mother “who lived somewhere in the countryside because of her health” since people were – and still are – not supposed to know about female aviators.
Despite that she had a happy childhood and a lot of fun with her siblings. Gen always looked forward to the times she would see her mother and especially those rare occasions she would meet Septimus. While she also learned about dragons and how to fly safely on one, Gen had to go through the education for girls and young women which included dancing (Gen loves dancing but is not really good at it), embroidery (as a form of art Gen was keen on mastering that and did so, though her teacher was not very happy with her motive: dragons) and so on. From her father she learned how to behave in society.
She actually never planned on becoming an aviator but when she visited her mother and sister in London, the Mauerfuchs egg started to show cracks and the hatchling chose her.

Other:
- She speaks English, French, some Welsh, and has done her best to forget Latin. Ry is trying to get German into her head.
- In her free time she likes to draw and is therefore never seen without a sketchbook. Alas, she hasn’t got much free time now that she has got to take care of Rhiannon.

Mod
I LOVE your charries! Approved ;) 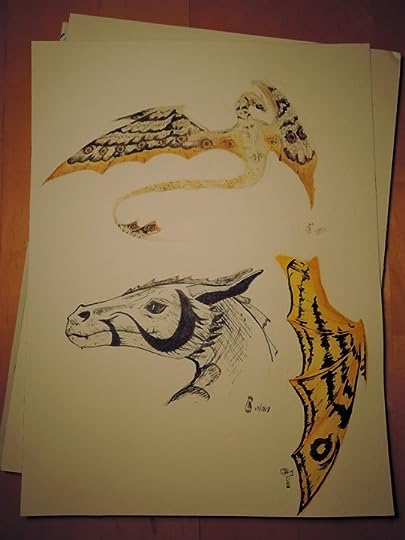 Rhiannon - with a close up of her head to show the markings, and the underside of her left wing

Mod
She looks awesome! You drew her pretty well! 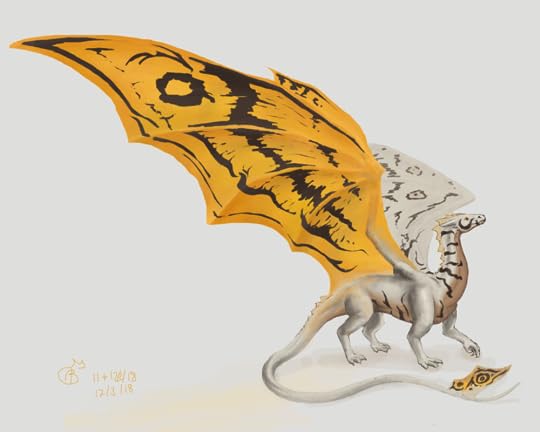 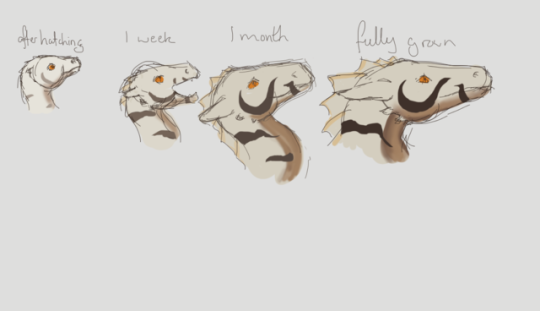 Mod
Great characters! So her older sister will become the captain of her mother's Longwing when it's time?

Mod
Thank you! :)
Yes that's right; Grace will "inherit" Septimus when the time is come