Another RP group (random one at that) discussion

Mod
name- Joy
age- 18
looks- http://m929.photobucket.com/image/all...
personality- TBA
crush/dating- nada...takers?
other- emo....she has no parents. they were killed in a fire.

Personality: Quiet/shy during introductions unless with a friend, very smart, likes a wide genre of things, repressed sometimes and will just pass it off as nothing.

Occupation: Part time at Mini Market down the road from college. First year of college.

Other/History: Father is an abusive alcoholic that was arrested when she was 10 after beating her to the point of being hostitalized. Mother commited suicide in front of her when she was 15. She moved from foster home to foster home until she turned 18 and moved out to an apartment. She transfered from school to school and kept her grades at a B average and managed to accure a scholarship to a good college for art students. She goes to school and takes her classes and then goes to work day in and day out. Spends as much time with friends as possible before she moved to go to college.

name- Iris
age- puppy
Gender: Female
looks- (normal) [image error]
Looks: (spy) Same as normal but with a Indiana Jones hat and sun glasses.
personality- to be rped out
crush/dating- none
Occupation: Spy dog
other- can she be Joy or Mai's dog?

Mod
How bout they live in a dorm! Like they attend a boarding school and they find this dog and sneak it in to the room!!
How does that sound?
~Sessy

Mod
YAY!! *pats self on back for the idea*
~Sessy

Mod
Alex is HOT!! Well..I think so...Mia thinks he's more cute though she strongly believes that its the guys job to woe the girl... >///<
~Sessy

Mod
he is hott
changed things on my charrie...pic...

hi hi, jordyn invited me to this group, i'm her sister. this rp looked the most interesting, so i thought i'd make a character for this one. 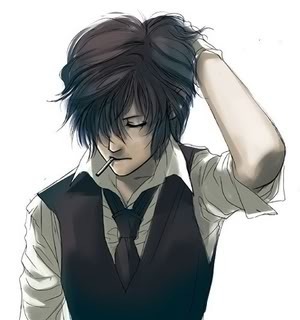 personality- agressive, unfair, intelligent, non-trusting
crush/dating- none as of yet
other- He's pretty much the creepy goth guy in the corner kind of person. He's the guy everyone spreads rumors about, like 'i heard he was expelled from his last school for biting his teacher's finger off' sort of thing. It's believable because he fights unfair and has been known to acctually bite in fights, or huck a desk or two. know one knows his history, because no one ever bothers to ask him.

i thought sence now its been revealed in the rp section, i should add in that he's dying of lung cancer. His parents were chain smokers and both died when he was in middle school. Now he has lung cancer thanks to their nonchalance about secondhand smoking.

even though he has a cig in the pic, he doesnt smoke.

Mod
*fangirl scream* He will totally have a fangirl club!! And I will lead it too! HE it HOTT!!!! With two TTs!!
Oh, Mia is going to really going to have fun with him!!! LOL
~Sessy

wow, girls really like the guys i play, thanks jordo

You really didn't know it was my character huh? I will torture you for the rest of your life!
MWU-HA-HA-HA-HA-HAAAAAAAAAA-cough gough

Mod
Kekekekeke.... Yes! Choke on Karma!
And I smight you! Ah NO! NOOOOOOO!
*Evil flying monkeys sour from the forest and grab JAR, dragging her to her death*
~Sessy

MWA-HA-HA! "I'll get you my pretty, and your little DOG too!" *kackles evilly*

name- Raiki (no one knows his last name)
age- 16
looks- http://i57.photobucket.com/albums/g21...
personality- Dark, mysterious, silent and cold. He is the kind of person that pops up behind you without warning, kills you a bit on the inside then disappears again. He always gets into fights and uses every cheap shot there is.
crush/dating- none
other- just arrived at the school yesterday and no one knows anything about him.

Mod
Hey! Echo! Is that a picture of Dark Mousy? From DN Angel? That's what it looks like to me....*shruggs*
And yes I know I just died...DEAL!!
~Sessy

Mod
Why you giving me silent treatment!!..
*brood brood*
~Sessy

Mod
You may have won the battle but you have not won the war! Yet!! Eh... Oh who am I kidding..
Do you like ice cream? I have some in my freezer..Here..
*holds out half gallon of Mint Chocolate Chip to EmoNeko*
~Sessy

Mod
Hehehe..Well, you'll have to come here and get it yourself..! ^.^
Because simply it wouldn't stay cool if I shipped it down to you...
~Sessy

Mod
What?
Oh and too late, my other friend ate it last night!! >o<
~Sessy

Mod
-evil laugh-
So...I ish bored...and have like three essays due tomorrow. That's why I haven't been on. Sorry, I have literally PILES of homework. I'm the first three days of school I had two math assignments, two quizzes, five worksheets, one book assignment, and one essay...
~Sessy

Mod
Yeah I have three tests this upcoming week also: Algebra, Psychology, History.
I'm going to fail my Algebra, I already know it. My last quiz was a measly 18/26...Yeah that's a 69%, a D+...I think I'm going to cry. And the irony for that is I help my pre-calc friends with their homework and I've been getting the answers right so far....=.=
But on the plus side, I get a 95% on my History test last Friday!! XD
~Sessy

wow, he looks like he's off of pokemon or something. XD

Mod
LOL! I can't view it from school so I'll have to wait til I get home...
~Sessy

haha, my school's better than urs!

Mod
Lol
trust me he's not from pokemon

OOOH! I love Spiral!...even though i've only seen the first couple episodes.....i need to watch it, its in one of my anime books somewhere....or its still on the DVD stack.....*goes and looks for it*

Another RP group (random one at that)