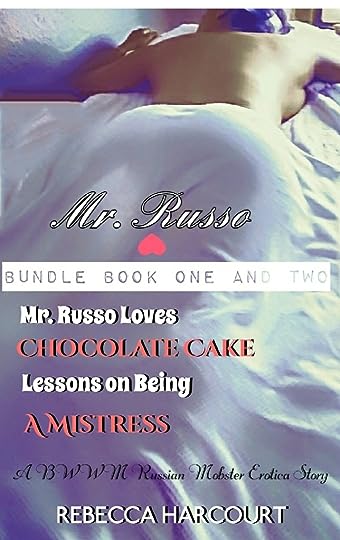 ****
SERIES DESCRIPTION:
Rebecca/Tiffany, an 18 year old black girl in her pre-college summer wants to maintain a relationship with Mr. Russo, her 41 year old married Russian neighbor, who is also mob-affiliated, but must keep it a secret.

Rebecca finally finds the nerve to approach Mr. Russo and offer him a taste of her chocolate cake...but will they be interrupted before he can eat it, leaving her frustrated and still a virgin?
Flirtation has exploded into lust, and now Mr. Russo must decide if he will resist, or give in to the temptation that is...Rebecca…
Their families...his wife...the neighbors...Rebecca and Mr. Russo must keep this a secret from everyone...Will they be deterred by the people that surround them? Or decide to give in to their desires...and taste the forbidden…
*****
Excerpt
At 3pm, I sneaked out of Mr. Russo's house and back into mine, my legs shaking uncontrollably and my body feeling different...like it belonged to someone else.
My pussy was swollen, so were my tits, and when I happened to glance in the mirror, my lips were red and swollen as well.
I stared at myself in the hallway mirror, trying to see if I looked like a woman of the world...someone who'd just lost her virginity.
All I could see was that my eyes were shining and my skin was glowing. I bit my lip and tried to control the smile that was pushing it's way out, but couldn't. I squealed and did a crazy little dance right there.
I stopped in shock when I heard my mom's voice coming from the guest room down the hall.
“Tiff, is that you?”
I ran up the stairs as fast as I could, yelling back “yeah”, slamming and locking my door in case she decided to come see how school was. How would I have explained my lack of school supplies and just fucked appearance??
I listened and heard some muffled noises. I didn't hear anything else from her, so I figured she was cleaning out the room and was too busy to come talk to me.
I breathed a sigh of relief and turned around, leaning on my door. I needed to study myself and the amazing, crazy experience I'd just had.
I looked around my romantic bedroom with a ditzy smile on my lips.
The walls were a pale pink, my bedspread had ruffles and a paisley design, scarves were tied above canopy posts, and everything suddenly was brighter and more poignant...I could almost hear classical music again.
I walked to my dresser, aware of the slow, sexy way I was moving, and leaned over to examine my face. My heart-shaped face still looked the same, my golden brown skin was glowing, the little indent in my chin calling attention to my full soft lips, my almond shaped eyes filled with a knowing smile. I felt like Eve in the garden of Eden.
I closed my eyes and remembered my walk over to his house this morning, the moment he pushed me up against the door and started kissing me.
Then my mind jumped to his silky black hair against my thighs, his hot, wet tongue on my pussy.
I squeezed my thighs together and groaned out loud, finding that one hand was on my nipples and the other clutched between my thighs as a deep pulsing rippled through my pussy.
The door slamming downstairs startled me and I opened my eyes again to my own reflection.
Suddenly, I looked beautiful...mature...sexy. My eyes were heavy, my lips pouty, my hair tousled, and I realized that this was the face Mr. Russo was seeing when he was kissing me, touching me...and fucking me. I could almost feel the thickness of his cock between my thighs...inside my pussy...in my mouth.
Quickly, I stripped off my clothes, wanting to see what he'd seen. I cupped my round tits, my nipples poking between two fingers. I ran my hand down my silky, flat stomach, over the curve of my thighs, then turned to the side, my ass poking out.
My cell rang and I grabbed it, knowing already who was calling.
“Carla!” I exclaimed.
“Oh my god, where have you been?? Today was the most boring day without you, bitch!”
“Carla!” I said again firmly, everything in my voice telling her I had some exciting news to share with her.
“What! Tell me now!”
“You would never guess what I did!”
As Carla demanded an explanation, a new voice inside asked me if I really wanted to tell her? This voice surprised me, because Carla usually knew everything I did and vice versa. Could I really consider not saying anything? I was dying to spill!
But what if she said something to someone?? Mrs. Russo would really kill me.
At the thought of her, I felt bad, guilty. Wouldn't it be wrong to brag about fucking another woman's man? Even if the person I was bragging to was Carla?
***
Check this out: Mr. Russo, Bundle Book One and Two: Mr. Russo Loves Chocolate Cake ... https://www.amazon.com/dp/B0769JQ333/...

Your comments are appreciated!

Another excerpt from Book One, Mr. Russo Loves Chocolate Cake
***
All tied up in Mr. Russo's bed

Mr. Russo, Bundle Book One and Two: Mr. Russo Loves Chocolate Cake / Lessons on Being a Mistress: (other topics)