Mod
Congratulations to Veronica and Tom on 10 years of the Sword and Laser book club,

It is hard to pin down the exact date S&L started.

For the kids, Pownce was an ancient short-lived social network. 'Pownce Me' isn't a creepy come-on line ;-)

or was it some previous unknown date when Veronica and Tom decided to start this adventure we've all gone on together.

Whenever it was, it has been 10 years, 110 books (101 picks and 9 alternates), many hundreds of hours of audio and video podcasts with many great interviews, many thousands of words mispronounced, many litres (or gallons) of alcohol consumed, many Quicks Burnt and Swords Bared and uncountable numbers of memorable moments on the forums (both here and on Ning)

HAPPY 10 YEAR ANNIVERSARY and may we all have many more :-)

Mod
From the Sword and Laser Wiki, here is:

"A Brief History of Sword and Laser"

(Dates given are blog entry announcements or date podcast posted)

Oct 16, 2007 First book to be read, The Golden Compass is announced

Mar 5, 2010 Sword and Laser moves from Ning forums to Goodreads

Dec 5, 2012 Sword and Laser Anthology officially kicked off and open for submissions.

Apr 1, 2015 Inkshares and S&L launched a publishing contest for The Sword & Laser Collection

Dec 2, 2015 Inkshares and S&L launched a sequel to the first publishing contest

Mar 1, 2016 The first book in The Sword & Laser Collection from Inkshares was released: The Life Engineered by JF Dubeau

Mar 15, 2016 The second book in The Sword & Laser Collection from Inkshares was released: An Unattractive Vampire by Jim McDoniel

Apr 5, 2016 The third book in The Sword & Laser Collection from Inkshares was released: Asteroid Made of Dragons by G. Derek Adams

Mar 14, 2017 Pilot X by Tom Merritt was published by Inkshares as part of The Sword & Laser Collection

What a history! It’s been mostly fun, hopefully that trend continues!

Oooh, Parsec award! If they got another eleven would that be a "Kessel Run"?

Mod
John (Taloni) wrote: "Oooh, Parsec award! If they got another eleven would that be a "Kessel Run"?" 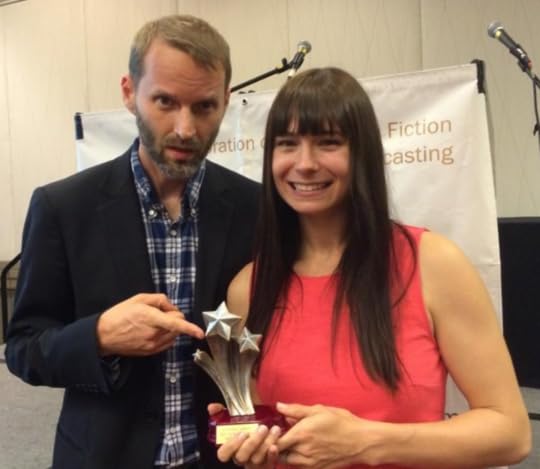 Some S&L history found on the net: book club member charlie posted "A Year of Sword and Laser" for 2013 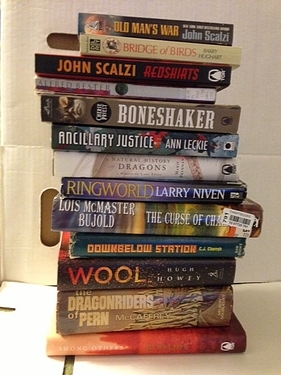 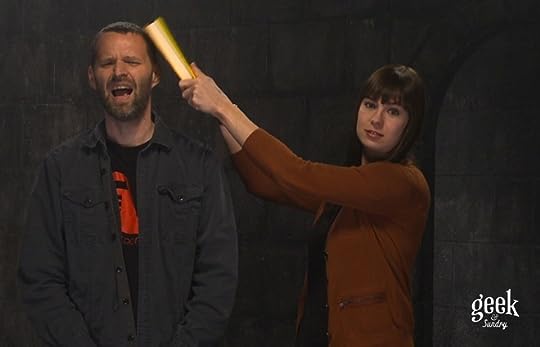 I really do like V's unemotional almost robotic stare as she wacks T over the head. I'm sure he deserved it. ;-)

Mod
Your history is missing:

Sept 3, 2014 Veronica gets tired of Rob's emails about forum upkeep and decides to make him a moderator.

Sometime later In giving a shout-out to moderator Rob during a podcast, Veronica accidentally combines the words and The Roberator is born.

Oct 10, 2067 The Roberator's consciousness is uploaded to the internet.

Aug 5, 2017 You don't have to wait until Oct 2067 for the Roberator upload. You can get Tassie Dave's bootleg upload of the Roberator now!

Oct 17, 2007 The first S&L group home (before my time) via the Wayback machine. Everyone was waiting for Veronica to pick the first book. 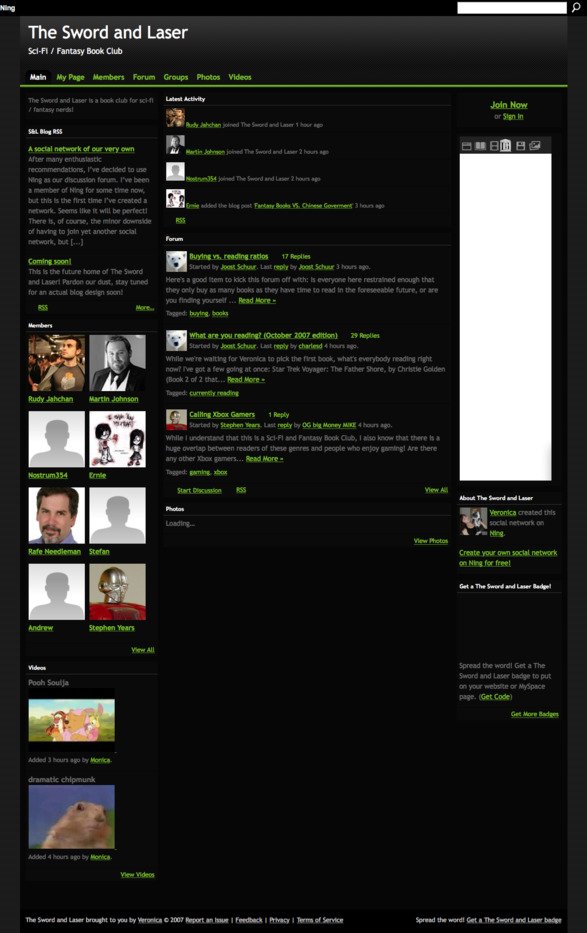 Mod
Rob wrote: "Oct 10, 2067 The Roberator's consciousness is uploaded to the internet.

Mark wrote: "Oct 17, 2007 The first S&L group home (before my time) via the Wayback machine. Everyone was waiting for Veronica to pick the first book.

I do have the link to that page in the OP. Where you can see it full size.

Mod
Mark wrote: "Aug 5, 2017 You don't have to wait until Oct 2067 for the Roberator upload. You can get Tassie Dave's bootleg upload of the Roberator now!

I don't deserve any credit. I just did a quick dirty cut in iMovie.

It is all the artistic work of:
Tanya Dawn: Singer
Mark Martinez: Lyrics

and John Taloni for suggesting it.

I joined when the group was on Ning. I feel so old. So, so old.

Rikki wrote: "I joined when the group was on Ning. I feel so old. So, so old."

That means you've had more time with books. WIN!

Thanks to Tom and Veronica for making a cool community and doing it all in their spare time.

Congratulations to us for having Tom and Veronica in our lives and giving us great books to read for ten years.

Mod
Wow!! I knew it was coming up, but I totally spaced on it! Thank you so much to all of you who have been on this journey along the way. You all make my life a lot brighter, and this group is incredibly important to me.

Mod
The 16th has got the official seal of approval.
Makes sense. When the first book was announced.

Mod
Yay! It's hard for me to believe I've been a member for 5.5 of those 10 years. I wish it had been the whole 10. I'm so thankful for Felicia Day/Geek and Sundry for letting me know that S&L/Goodreads was a thing, and of course to Tom and Veronica for creating this group that is so important to me.

It's not just that this group got me reading again, but now I have a monthly in person meetup (plus I got to go to the SF meetup once and meet Veronica & co), tons of new online friends to discuss books with and I've gone on to make a small group of my own.

I don't always comment, but I read along every month. But, I'm so glad I found this group through G&S, and like Rob said I wish it'd been the whole 10 because this group got me reading again.