Starting this month, we are going to enhance the discussion of our book of the month group read by pairing it with a film (standalone or series), including TV/streaming series.

Please nominate a film that you believe is a good match for our group read by posting in this thread.

* The nomination process ends on 7 October at 11:59PM Pacific Time.

Final Selection Process
To promote the broadest participation possible, we use a form of approval voting. In this voting system, you should vote for all of the films that you want to watch. The nominee with the most votes would become the film of the month. In this way, you don't need to vote for a film just because you think it will win even though you'd rather discuss another one. Instead, you can vote for both of them! 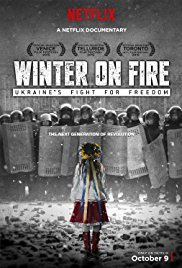 A documentary on the unrest in Ukraine during 2013 and 2014, as student demonstrations supporting European integration grew into a violent revolution calling for the resignation of President Viktor F. Yanukovich.

Since this was the only film nominated, it's now the film of the month for October 2017.

Since this is the first time we're nominating, we'll be flexible. Therefore, if you have other nominations, then please add them to this thread and we can consider listing them as another challenge. A maximum of 2 challenges can run simultaneously.

I didn't notice that this film was a Netflix original and consequently was available only on Netflix. It might be worthwhile if we could find a good match that was more widely available through various distributors.