In this volume, you will encounter tales of ghosts, haunted houses, witchcraft, possession, demonic pacts, and ancient, nameless horrors. Stories of the strange and macabre, of a man tormented by an age-old evil, a corpse returned from the dead, a brutal killer with a shocking secret, a contraption with the power to trap its victims eternally inside a nightmare. With stories ranging from frightening to horrific to weird to darkly humorous, by a lineup of authors that includes both masters of horror fiction and award-winning literary greats, this is a horror anthology like no other. 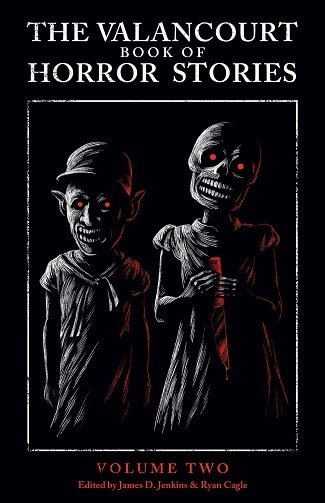 Valancourt Books has earned a reputation as one of the foremost publishers of lost and rediscovered classics, reissuing more than 400 unjustly neglected works from the late 18th century all the way to the early 21st. In this second volume of rare horror stories, the editors of Valancourt Books have selected fourteen tales – all by Valancourt authors – for this new collection spanning two centuries of horror. This volume features a previously unpublished ghost story by Nevil Shute, a brand-new tale by award-winning author Stephen Gregory, and twelve other tales that have never or seldom been reprinted.

Foreword by James D. Jenkins and Ryan Cagle
Samhain by Bernard Taylor
The Bell by Beverley Nichols
The Elemental by R. Chetwynd-Hayes
Herself by M. E. Braddon
The Creatures in the House by Robert Westall
November the Thirteenth by Russell Thorndike
Halley's Passing by Michael McDowell
The Nice Boys by Isabel Colegate
The Watcher by the Threshold by John Buchan
Tudor Windows by Nevil Shute
No Sin by John Metcalfe
The Dice by Thomas De Quincey
Camera Obscura by Basil Copper
The Boys Who Wouldn't Wake Up by Stephen Gregory

I loved this anthology!

Same here! Another winner all around!! :D

So far I'm enjoying it. I've just finished the story by Mary Elizabeth Braddon. The only downside is that I didn't realize she'd written supernatural-ish tales, so I did a bit of checking and found this book:

The Face in the Glass and Other Gothic Tales,

and then, dear reader, I bought it. You two wreak constant havoc on my wallet!!!!

Nancy wrote: "So far I'm enjoying it. I've just finished the story by Mary Elizabeth Braddon. The only downside is that I didn't realize she'd written supernatural-ish tales, so I did a bit of checking and found..."

SQUEE!!! I was going to look her up myself--I loved that story! Buying now!

Had I stopped at that one, it would have been okay, but then I found a four-volume set of her collected supernatural tales and bought Volume 1:

Sadly, I then realized that I needed to pick up a book by her that Valancourt had published that I don't have, Dead Love Has Chains.

I'm out of control.

Valancourt titles.....Nancy, you need to stop being a "bad influence"--LOL!

Kimberly wrote: "Valancourt titles.....Nancy, you need to stop being a "bad influence"--LOL!"

Oh, it got worse. I also bought a copy of The Watcher By The Threshold by John Buchan.

this one, and the first one and the Christmas ghost story one all went on my birthday/ Christmas wish list.

I recently finished the first volume and it was so good. Not a bad story in the bunch and many of them outstanding. I can't wait to read this second volume.

Marie-Therese wrote: "I recently finished the first volume and it was so good. Not a bad story in the bunch and many of them outstanding. I can't wait to read this second volume."

I don't know how they did it, but the second one tops the first. I didn't think it was possible.