Mod
Sherlock Holmes Double Issue! October 2017 Mystery Weekly Magazine is now available, including stories from a few of our group members! Aside from being available in print through Amazon, anyone who wants to read our issues FREE can now ask their local librarian. Mystery Weekly is now available to over 30,000 libraries and schools through the Flipster/Ebsco system, meaning you can read our mysteries online with your library card. We also have free trial subscriptions on Kindle Newsstand. 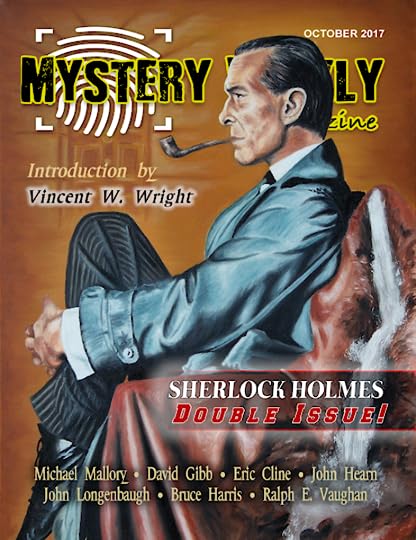 Michael Mallory “The Adventure of the Lyceum Theatre Curse” At the request of Bram Stoker, Sherlock Holmes and Dr. Watson investigate the deadly occurrences plaguing a production of Macbeth.

John Hearn “The So-Called Yoga Instructor” The part-time yoga instructor at an active retirement community is murdered in a fellow resident's apartment.

John Longenbaugh “The Mechanical Detective” In a Victorian London substantially different from the one we know, no consulting sleuth is as extraordinary as Ponder Wright, the mechanical detective. Yet even his wits are tested by a murder where the suspects are all automatons.

Bruce Harris “Who Made Sherlock's Clay Pipe?” At long last, the maker of Sherlock Holmes's clay pipe is revealed.

Mod
Mystery Weekly has a new mobile app! All of the 178 short mysteries we published since 2015 are available to read in your browser/phone. There is also a 'you solve it' interactive fiction story.

Please send any comments or bug reports to me by PM.

Just type this URL in your phone's browser: