Only comment if here if you want to Rp. 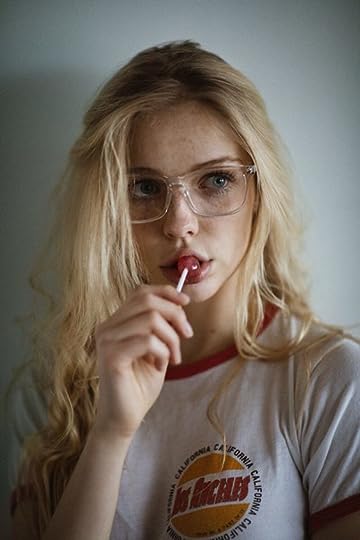 London, England
Khaleesi Sansa Westerling was born during a storm on October 12th to her banker parents. She had one sister who kicked her and hit her when she received any attention from her parents. When she was 12 her parents' bank was involved in a large scandal that made them move out of England.

Untied States Of America
Khaleesi and her parents moved to Washington DC and her sister stayed in London with her grandparents. Her parents decided to work for the government and Leesi went to Blue Lake Academy.

Appearance: (at least 4 lines- not just a picture) Long brown colored hair that hits a small waist frame a heart shaped face with high cheekbones and a pixie nose. Brown doe eyes hide behind her thick hair and show a sprinkle of freckles across the bridge of her nose and all across her cheeks. Her tall 5'6 frame hides beneath dresses and blouses. Underneath that she has a well toned body from all her competitive archery. Her eyes are always covered in makeup and her lips with red lipstick.


Personality: (at least 4 lines- try to be descriptive) There's more than meets the eye in the case of Natalya Ilyinichna Rostova, but above else know that she's precise and intuitive. Of course she's also understanding, playful and friendly, but these are in a way balance by being angry as well.
Her precision though, this is what she's so well-liked for. On many occasions people will count on this and her incisive nature when they're feeling down.

Nobody's perfect of course and Natalya has plenty of character faults too. Her shallowness and deviousness can cause things to heat up even at the best of times.
Fortunately her intuition usually softens the worst of it.


History: (at least 4 lines- try to be descriptive ) Natalya Ilyinichna Rostova was born into a rich family in Moscow, Russia. Natalya has 4 siblings named Pierre, Sonya, Anatole, and Marya. She grew up in a loving and caring family, she wanted to leave Russia and travel somewhere else in The World. Her father placed her in competitive Archery at age 8 and she has won many national and International titles. Her mother also got her a vocal coach and gave her acting lessons. She also models on the side.

Other Information: Loves Musicals and wants to star in Natasha, Pierre and the Great Comet of 1812

Relationship Status: Crush on Tanner Macmillan
Family at the Academy N/A
Friends: None yet but wants to find one

Interest (if student, what you're studying): Education

Appearance: Theodosia has brown curly shoulder length hair. Chai tea latte colored skin and dark brown eyes. Her hair is always up or in a half up. She is 5'5 and wears skirts, combat boots, and blouses. She also wears mascara and eyeshadow

Other markings or accessories: Freckles all over her face

Personality: Theo is very outgoing and talks to everyone. She never takes any risk that could hurt her. She has ADHD and can be a little hyper sometimes. She sometimes can't be trusted and she can be very loyal to her closest friends.

History: Theo was born to a set of very protective parents, Aaron Feyder and Theodosia Feyder. She had a twin brother named Theodore but he died 4 months after they were born. Her parents never had any other kids after Theo and Theodore. Her father was a politician and her mother is a professor at Columbia University. Her father used to homeschool her and she took her mom's classes at Columbia University for a little bit. When she was 14 her mother died and her father became quiet and wouldn't talk. Her grandmother took her in and sent her to Blue Lake Academy. She chose Education because she wants to teach at Columbia like her mom.

Likes:
-Chocolate
-Swimming
-Gymnastics
Dislikes:
-People
-Gym class
-
Relationship status: Single as can be
Family at the academy: Her cousin Natasha
Friends at the academy (optional, if you want to list them): N/A

Appearance: Ruby has almond shaped eyes that are a magical blue color almost turquoise. She has silky, wavy brown hair that she wears in ponytails. She has pale skin from only spending time inside and at the pool. She stays in her trademark jeans and t-shirts. She wears no makeup because it burns her eyes. She is tall and has a muscular build.

Other markings or accessories:

Personality: RUby used to be loud and social untill she moved to America, She is shy and caring. She nevers speaks to anyone but her friends and family. She loves to help people and animals. Ruby has a slight speaking problem but since she never talks it comes at a shock to everyone.

History: Ruby Elaine was born in small town known as Warlington, England. She had quite a happy life living with her veterinarian parents and six brothers. She lived a comfortable and sheltered life until her parents decided to move to America. She had never thought she would ever bullied until she moved to her new school of County Cook Middle School in Cook, Colorado. She was bullied for her drabby clothes which were popular in England and her speech problem. Everyday she would come home from school crying and her parents decided to move further west to Erdrich, California but she never stopped her daily battles at school. Her parents applied to Blue Lake for their daughter to actually focus on school. They drove her up and said goodbye.

Personality: Catarina is a sweet caring girl who loves to write. She is quite bossy when it comes to being in charge. She always has a plan and makes sure everything goes to plan, unless she finds major plot holes. She already has her life planned from college to adulthood. She is also a hopeless romantic and hopes that she somehow finds love.

History: Catarina Clove was born on July 15th in Italy to her American mother and Italian father. When she was only five months old they moved to Colorado. When Catarina was three her mother gave birth to another daughter named Catalina Marie and Catarina loved her little sister to death. When it was time for Catarina to go to school, her parents sent her to a boarding school in New York, it was there where she discovered her writing talent. She has won multiple awards. Her parents decided that she should apply to BLA and she did. She is super excited to become a student and excel in all she does.

Family: Hopefully her sister when she is older

Personality: Catalina has a fiery sprit as bright as her red hair. She always has to be in charge. She acts a lot older then her older sister Catarina but hey she still loves her. She dream is to one day open her own business and become a billionaire. She loves to plan fundraisers and has raised tons of money for her old school. She also wants to add that she is always in charge.

History: Red haired Catalina was born to her Italian father and American Mother. She grew up in Colorado with her older sister and older half-brother from her father's previous relationship. She loved her siblings and they loved her that's all that mattered to her at least. Then she discovered her new talent, bossing people around, it led her to may punishments with her parents. Once she went to school, she served as her 6th, 7th and 8th grade class president. She never found out why but people kept voting for her but who cares. Her mother and father decided to send her to BLA with her sister because of their government program.

Appearance: Lucretia has blonde hair and blue eyes. Her face is heart shaped and she has dimples when she smiles. She has a sprinkling of freckles on her face and a beauty mark on her cheek. She wears quite natural make-up during school but likes to change it up sometimes. She wears a very tumblr inspired outfits like shirts with sayings like "waffles" or "girl power" on them with high waisted jeans. She loves her birkenstocks and converse.

Personality: Lucretia is very talkative, she could talk all day. She also is quite studious and always has to get an A. She can make anyone smile and loves to laugh. She also self-doubts herself and calls herself fat or ugly. Due to this she has suffered from Eating disorders and has almost died because they caught one too late.

History: Lucretia Andromeda was born to her Greek and Italian parents in Georgia. She was born on September 8th 2001. Her parents believed that she should speak multiple languages so that she could be successful in the world. Due to that she can speak Greek, Latin and Italian fluently. She went to Catholic schools and blew the Latin Teachers way with her Latin skills. Once she hit Middle School things started to change for Lucretia and she was bullied because she looked to fat. In the 6th Grade Lucretia began to purge and binge eat. A couple months later she was diagnosed with Bulimia and forced to stay in the hospital until she was at a healthy weight. Her parents home schooled her for the rest of Middle School and would have for 9th Grade if her baby sister Octavia Dione hadn't shown up. Lucretia was thrust back into the world of actual school and was bullied again. Later that year she was diagnosed with Anorexia and her parents moved them to Washington State. She applied for Blue Lake and got accepted. She plans on studying Medicine because Latin is important in that field.