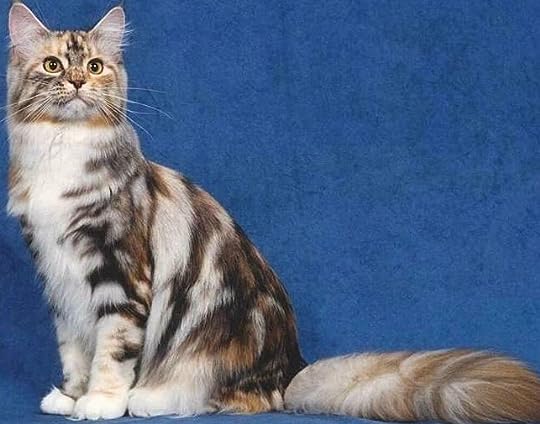 Personality: nice but can be aggresive
Kin: none
Mate: spottedfur
Other: none 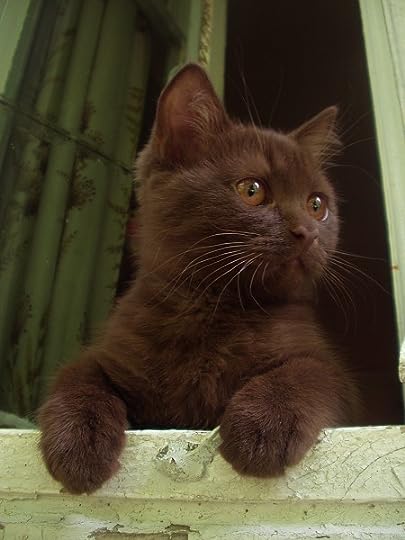 Mod
...Chocolatekit? Cats don't now about chocolate! But nice charries besides that:)

Mod
none of those are as chocolate brown as he is...

Mod
I changed windrush... she named Chocolatekit becuase she knew of chocolate cause she was a kitty-pet! ^^

Mod
Yeah, so have I. Especially now with all the rain. And since cats ccan't understand humans, she wouldn't have known that was chocolate, even if she had seen it before. Just saying:)

Mod
Yeah, you can be deputy.

Name: Otterkit
Gender: She-cat
Clan: WindClan
Rank: Kit
Pelt: Otterkit has a dark brown pelt, almost black, with some lighter flecks near her haunches. Her long, sleek tail has a white tail-tip, with light brown stripes leading up to it. Her head has a distinct black stripe running from in between her ears all the way down her back and to her tail. Otterkit's muzzle has a mixture of black furs with dark brown fur. Her underbelly is dappled with light speckles, against light brown fur, almost like a deer's. Her eyes are bright blue, and could light up the whole forest. They sparkle when she's delighted, and are dull when she's down. Her eyes look even brighter at night against her dark pelt.

Personality: Otterkit has a very cheerful personality. The only time she isn't energetic or exploring, is when she's sleeping. Though she is quite sensitive, so if some cat were to bruise her fragile feelings, she would be largely affected deep in the heart. Her adventurous personality often gets her in trouble, but she is used to it by now. Despite Otterkit's sensitivity, she is fairly tough and cannot be fazed easily. Though she could use some work on her physical strength, her will is impenetrable. She can take care of herself quite easily, but of course she has not yet witnessed the real life-threatening concepts in the forest. She is quite eager to become an apprentice, and is disappoied in herself for her clumsiness. Otterkit sometimes feels lonely since her sister would always spend time in the medicine cat den, and her mother would never tell her anything. She would give her life without hesitation for her Clan, and hopes to gain every skill she can so she can improve herself and do everything she can for her Clan.

History: When Otterkit was young, her father died a tragic death. She was too young to even know him, maybe three days old. She grew up after that living her life without a real father. She had heard great things about her deceased father as she had been developing, and had grown bold to show her Clan that she could live up to him. She had lived in a shadow most of her life, since her mother would never tell her what happened to her father, or let her know the cons of being a warrior. Her mother was not born a warrior, but Otterkit has not been told this for her own good. She has tried to improve herself everyday to show the cats she has loved and lost that she will never give up their dream; to fight for their Clan and defend, no matter what the toll may be.

Other: About a moon ago, some young foxes were reported in her Clan's territory. There weren't many warriors then, and most were infected with whitecough. She felt she needed to help her Clan out and went out to hunt down the foxes alone. She had thought a young fox would be easy to take down, even though she had not had any warrior training yet. It turns out the fox was much larger then she had thought and had broken her leg and in her desperate escape. Luckily before the fox could kill her, a warrior had appeared and warded the fox away. Otterkit is now six moons, but she is still recovering from her sore leg, so her apprenticeship has been delayed. Ever since she has been ashamed of herself, but her adventurous spirit had only gone up since then and she has been doing everything she was not supposed to do.

Kin: Willowkit-I'll make her in a sec
Mate: None
Crush: None

Mod
Thnks! It was originally made in this group: http://www.goodreads.com/topic/show/2... , and if you look, you'll see why it's so long.

Mod
Hey, I was wondering...do you think maybe Blackkit and Runningpaw could end up together? I don't know why, but I could just see them together.

Only temporary so I can do Willowkit's apprentice ceremony... 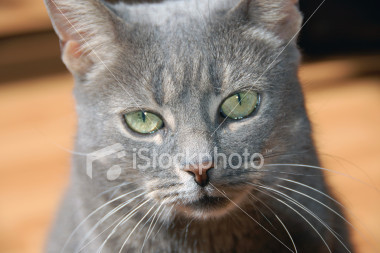 Personality: moody fearce snappy can be verry kind
Kin:none
Mate/Crush: windrush
Other: 1 of his claw is side ways

Mod
Wow I like his personality: moody, fierce snappy, yet very kind lol

Mod
Name: Willowpaw
Gender: She-cat
Clan: WindClan
Rank: Medicine cat apprentice
Pelt: Willowpaw's pelt is a pale brown with a dark tail-tip and paws. Her underbelly has a lighter brown and some white dapples, resembling a deer. She has distinct dark stripes running up her legs and to her belly. The same type of stripes run on her forehead down her back and to her tail. She has cream colored tufts of fur on the tips of her ears. Her nose is black, and her right back paw is cream colored, contrasting to the rest of her fur. She resembles more of her mother, and Otterkit resembles more of their father.
Eyes: Willowpaw has stunning amber eyes that cut through the dark of night and can uplift anyone's spirit. They dance in the sunlight and glow in the dark, making Willowpaw a bright, young cat that you would want to make friends with. Her eyes shape her personality and her mood. When she is sad, they grow round and gloomy, sometimes clouded and glazed. If she is delighted, they will sparkle and light up, growing narrow with excitement.
Personality: Willowpaw has a variety of personalities, but her optimism shine through. When something goes wrong, Willowpaw will always find a way to make it seem right, and the situation isn't that bad. Her judgement is seemingly flawless, and she doesn't give a doubt to voice her own opinions. Her smooth voice never cracks when she speaks in front of a crowd, showing she is as graceful as a swan. She is more calm and colleted than her sister, but does not hold her against it. She knows Otterkit wants to be the best warrior she could ever be to prove to the Clan her father's spirit still burns brightly in her. Willowpaw will not hesitate to do what she knows is right, but sometimes isn't sure whaat path StarClan has layed out for her. She will sometimes doubt herself, but the very next morning she will always be sure of who she is again. She sometimes has trouble with the herbs, but in the end, she does well. Her connection with StarClan is incredibly strong, and they know she would sacrifice herself for any cat in her Clan or the Clan altogether without any hesitation. Willowpaw is a proud cat and is respected throughout the Clan. She has rightfully earned her place.
Mate: None
Crush: None
Kin: Otterkit(Sister), Robinheart(Mother), Bramblestorm(Father)
Mentor: Rainleaf
Other: Feels bad since Otterkit has not been apprenticed yet because of her lame leg
History: When Willowpaw and Otterkit's father died, Otterkit advanced farther and tried harder than any other kit has before. Willowpaw started to learn some of the herbs and spent most of her time in the medicine cat den. She had wished to help her Clan not in violence but with peace and healing. The way of a medicine cat she knew was for her.

Mod
Windrush is a sissy and is paranoid for Chocolatekit.

Chocolatekit is not the smartest kitten but is sweet.

plz take the characters since i can't keep up with this rp topic.

Mod
can i have them?

Name: Talonclaw
Gender: Tom
Rank: Warrior
Clan: WindClan
Description: http://i262.photobucket.com/albums/ii...
Personality: Only cares about his own Clan, fiesty, only nice to his mate and at times his Kin too
Kin: Open
Mate/Crush: Open

Name: Eaglepaw
Gender: M
Rank: Apprentice
Clan: Wind
Description: Eaglekit has gold eyes that are very sharp, gray and brown stripes,and a thin tail that's accident-prone http://4.bp.blogspot.com/_e58wgWjVAcI...
Personality: He has a giant mouth. he can't stop talking, and it can get really annoying. He's even rumored to gab in his sleep. He can be a real sweetie pie at times, and is an unusually good fighter.
Kin: Open
Mate/Crush: Tatterkit
Other:

Name: Tatterkit
Gender: F
Rank: Kit
Clan: Wind
Description: http://www.findakitten.co.uk/images/g...
Personality: Tatterkit is nice to everyone- even people she shouldn't be nice to. She can't hold a grudge, and tries her best to help everyone in hopes to someday be a medicine cat. But she'll settle for a great warrior, too.
Kin: open
Mate/Crush: open
Other: Although she thinks Eaglekit is sweet and all, she just doesn't like him in the way he does her. In fact, she finds it a little strange that an apprentice likes a kit