80 views
Book Discussions (general) > All for Nothing, by Walter Kempowski

Mod
All for Nothing 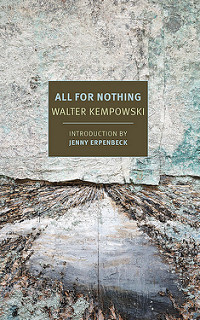 The last novel by one of Germany’s most important post-war writers, All for Nothing was published in Germany in 2006, just before the author’s death. It describes with matter-of-fact clarity and acuity, and a roving point of view, the atmosphere in East Prussia during the winter of 1944-45, as the German forces are in retreat and the Red Army approaches. The von Globig family’s manor house, the Georgenhof, is falling into a state of disrepair. “Auntie” runs the estate as best she can since Eberhard von Globig, a special officer in the Germany army, went to war, leaving behind his beautiful but vague wife Katharina and her bookish twelve-year-old son Peter. As the road beside the house fills with Germans fleeing the occupied territories, the Georgenhof receives strange visitors–a Nazi violinist, a dissident painter, a Baltic baron, even a Jewish refugee–but life continues in the main as banal, wondrous, and complicit as ever for the main characters, until their caution, their hedged bets and provisions, their wondering, and their denial are answered by the wholly expected, events they haven’t allowed themselves to imagine.

Mod
"I encountered one masterpiece this year—Walter Kempowski’s epic novel All for Nothing…What an amazing book this is: it was excitedly put into my hands by a writer friend, and I’ve been handing it on, in turn, to anyone who’ll listen to me….at once searing and utterly unsentimental, [All for Nothing is] a historical epic that doesn’t attempt to hide the fact that it is being written in the twenty-first century, decades after the events."
—James Wood, The New Yorker, on Walter Kempowski's All for Nothing