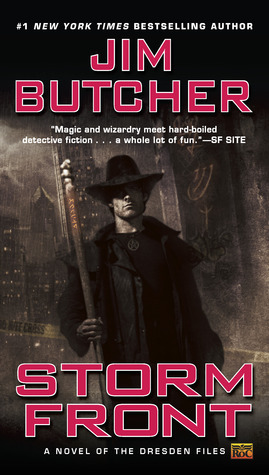 Look at you all grown up and modding. :)

Look at you all grown up and modding. :)"

I have been reading the Codex Alera and was interested in getting into the Dresden Files. I have heard good thing about the Dresden Files but have not read them yet due to the fact I do not normally read urban fantasy.

I haven't read any of his books yet, but I've heard good things. I'm more likely to pick up high fantasy, but some urban has been good so I'm hoping this is one of them.

Is this the first Dresden Book? I might actually join for this, too, although I'm in several buddy reads already haha.

Mod
It is the first one, and a great place to start if you haven't read much urban fantasy. :)

Mod
Liam, I think July is going to be a BR madhouse for us lol.

Mod
Enjoy this one. Such a great series.

Trying to read Eye of the World and the Way of Kings in the same month is ambitious as it is haha =].

Those two in the same month is ambitious, Liam!

Trying to read Eye of the World and the Way of Kings in the same month is ambitious as it is haha =]."

If anyone is thinking about listening to the audiobooks for these, I can attest that they are excellent..

Mod
Chris wrote: "If anyone is thinking about listening to the audiobooks for these, I can attest that they are excellent.."

I just got the audiobook since you recommended it and will join in on the buddy read. :)

Hmm *eyes the unread Dresden books on the bookshelf* I think now is the time!

Thanks for the audiobook recommendation, I wasn't sure about the quality, but I'll definitely go for that route if they are good quality!

Mod
So I totally cheated. When I said I got the audiobook, I read it then...and now I'm almost done the 3rd book...

You can still join in the discussion, Jenna. :)

Finished Eye of the World, so I'm going to start this one a day early.

On a side note, I think the cover of my version is one of the worst I've ever seen (and almost stopped me picking it up originally).

Yeah...not a fan of that cover either.

I think the U.S copies of these books seem to always have better covers than the UK ones. You lucky Americans!!

The cover that I have is:

Which, I think, is a little too generic.

This book has delivered one of my favourites lines ever in urban fantasy:

(view spoiler)[But just because you're paranoid doesn't mean that there isn't an invisible demon about to eat your face. (hide spoiler)]

I have to finish some of my other reads first, I'm in the middles of:

Mistborn: The Final Empire
The Eye of the World
Half a King
Celtic Legends: Heroes and Warriors, Myths and Monsters

I'm trying to read so fast right now my eyeballs are twitching!

I will probably be starting tomorrow. I only have two books going right now (and should finish one today) which feels kind of odd. Excited to get into this!

I'm going to start this first thing tomorrow since I'm finishing up Eye of the World today =]. Anybody else get a start already?

Hoping to read a little today, but it might be tomorrow for me as well.

I am late in starting this book! It will be a second read for me but I cannot wait to return to Chicago to see Mr. Dresden.

Also, I found it peculiar that two mages in modern times are named Harry (by different authors). Does this imply that all the Harry in modern days are mages?

I read the first two chapters last night. It seems interesting so far. I like Harry.

Enjoy! It's a nice start to a great series, that only gets better :)

I'm honestly not sure what chapter I'm on, because the audiobook is rather old, and the chapters aren't split up correctly I don't think haha. But It's an 8 hour book, and I listened to the first hour on my ride into work today. First impressions:

1. I'm actually surprised by how short this book is haha. I thought it would be bigger. It was kind of a relief, being that I just finished reading Eye of the World, which was a 30 hour book.

2. The setting was unexpected as well. It's rare that I go into a series knowing absolutely nothing about it, but I managed to literally learn nothing about this book before going into it haha. I had no clue it was such an urban setting (Chicago). It gives off a major murder mystery vibe, which I enjoy, and having Harry Dresden be a wizard adds a nice twist. I think I could really get into this.

Yeah, it's a very short book, the following book in the series a bit longer.

Butcher did great things in regard to world-building and characterization in this series. I plan on getting back to the series soon. I've read 7 books so far, so there's still a way to go :)

I've just finished chapter eight. Seems fairy interesting so far. And it is pretty short, which I like.

(view spoiler)[Mister and Bob were both nice additions to the cast of characters. I'm interested to find out some more about Harry's past. Seems like there's a lot of death there. (hide spoiler)]

Mod
C.P one of my favourite things about this series is the cast of characters.

They seem pretty cool so far.

Getting through this one rapidly. I'm enjoying it so far.

(view spoiler)[Mister, Bob and Murphy are coming through as my favourite characters. Whether this is because they're sort of on Harry's side and written more sympathetically I'm not sure.

Morgan annoys me; he comes across as a narrow-minded idiot. (hide spoiler)]

Ahdam wrote: "Good luck with that and I hope you enjoy mistborn and eye of the world there really good and while I wasn't a huge fan of half a king it's a pretty solid book so hope you like that and never heard ..."

The last one isn't a fictional novel, it's actually a historical text about the Celtic people ☺

So, I started this last night, and I finished right before dinner today! I'll comment on the book when it's safe that most of you are finished! To many good points to put down in spoiler points

Wow, you read that really quickly! I'm about 30% through right now. I could potentially finish tomorrow, but I'm thinking Thursday or Friday is more likely.