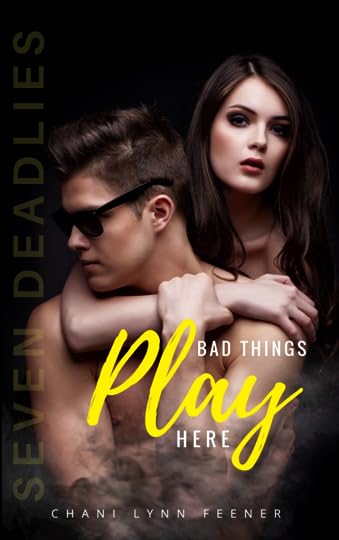 I'm looking for reviews for my upcoming adult Paranormal Romance book, Bad Things Play Here! These will be ARC Copies, in PDF, ePub, or mobi. format. Please leave a comment below with your preferred format and your email!

Here is the blurb:

Piper Anesidora hates her last name, and the Reaper and demon infested life that comes with it. For centuries, her family has been tasked with protecting Pandora’s Box, and ensuring it’s never reopened. That’s why five years ago she ran away, hoping to build a normal life, one of her own choosing. And it worked. For a little while. But now her brother has been taken by Orpheus, a malicious soul who’s escaped from the Underworld, and if that isn’t bad enough, he’s also stolen the box. The sooner she finds her brother and stops Orpheus from unleashing hell on earth, the better. Piper wants nothing more than to return to the mundane existence she’s created for herself. That is until she’s partnered with the one guy capable of making her crave more. She’s always been told giving into sin is wrong, but her ancestors clearly never met Lust.

Reece Luben takes intimate knowledge to a whole new level. As the Greek god of lust, he has a long standing reputation to uphold as a playboy, despite the fact he’s grown bored with the game. It’s been centuries since he’s cared about someone other than his maenads, so he passes the time getting people to shed their inhibitions. As one of the few beings who can sense Pandora’s Box, Reece has no choice but to help Piper find and stop Orpheus, even though he’s avoided her family since the start of his second life. But the feisty Anesidora woman makes him feel things he’s long forgotten, and what starts out as one night giving into desire turns into another…and another. What happens when the god of lust decides he’s changing the game and playing for keeps?


I would appreciate if you could get your review done within two weeks of receiving it! I have 5 copies available!

I would love to R2R this one in mobi format. meghann.sherman@gmail.com Thank you!

meghann wrote: "I would love to R2R this one in mobi format. meghann.sherman@gmail.com Thank you!"

Thank you. Emailing it over now! :)

I would like to review this book. Please send a mobi file to ramona_p@hotmail.com.
Thanks,
Ramona

Ramona wrote: "I would like to review this book. Please send a mobi file to ramona_p@hotmail.com.
Thanks,
Ramona"


I emailed you a copy! Thanks!

I'll post my review on Amazon once it's released.

I could not put it down. I was just going to "read for 10 minutes" before I got ready and then ran the list of errands I was supposed to do today. Didn't happen, but no regrets. :)

meghann wrote: "I could not put it down. I was just going to "read for 10 minutes" before I got ready and then ran the list of errands I was supposed to do today. Didn't happen, but no regrets. :)"

Wow! Really glad you liked it that much!