Cyan had absolutely loved the ride and was almost sad when she saw her house and felt Raiden begin to descend. Still, descending had its own thrill and when they landed on the ground she was laughing again. Raiden shifted and finally they were back to how they started, Cyan holding on tight to Raiden's human form in a hug. The Water Draki giggled breathlessly at Raiden's comment, eyes alight and showing just how thrilled and excited she was. 'You're amazing! That was amazing!' She said with a breathless laugh, letting go of him and twirling. She flopped on the grass with a giggle, taking a deep calming breath and staring up at the sky they were just soaring through. Then, quick as a jiffy, she was up again, grinning and grabbing his hand. 'Come on! Welcome to my home!' She said, yanking him towards the front door.

'Kinda!' Cyan said absently, tugging Raiden along the path. 'They're both Draki if that's what you mean. Mum's a Water Draki like me but Ladon is an Earth Draki so he's a bit different.' She said. But before Raiden could respond they were at the cottages front door and Cyna was kicking it open and yanking the dragon inside. (The image is the inside of the house) 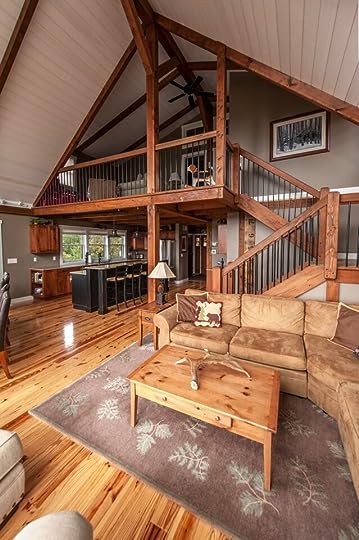 'Mum?! I'm home! And I brought a friend!' Cyan called into the house, her talons clicking on the floor as she walked since she was still in Draki form. She heard a door open and close upstairs and looked up just in time to see her brother Ladon peering over the balcony edge in human form. 'Mums out getting dinner.' Ladon said to his sister, before flicking his curious green eyes over to the 'human' behind her. 'Uhh...hi! I'm Ladon.' The earth Draki said awkwardly, before shooting his sister a look that clearly said 'Who is this guy and I hope you know what your doing'. Ladon was different from Cyan but you could clearly see the familial resemblance. He had the same angular features, pale but tanned skin etc. His eyes however were a bright emerald green and his hair was dark brown. 'Ladon Ladon Ladon!' Cyan called excitedly, bounding up the stairs three at a time, using her wings to give her a push. 'This is Raiden.' She said, grabbing her younger brothers hand and dragging the boy downstairs.

Cyan watched as her little brother blinked a little in shock before he recovered and nodded back politely. 'Nice to meet you to.' He said, voice warm if a bit stilted. Cyan herself was still bouncing in excitement, tail swishing behind her like she was in water. She really really wanted to see Ladon's face when he realised that Raiden was a dragon but the boys were taking to long so she decided to just tell him. 'Ladon!' The Draki said, latching onto her brothers arm but making sure her claws didn't pierce his delicate human skin. 'Raiden is a dragon! A real life dragon!!' She said, squealing a little at the end in excitement and then giggling at her brothers shocked expression. Ladon gaped, eyes going wide as he stared at the man in front of him. 'You're kidding.....but that's.....oh wow!' Ladon stuttered. The shock and surprise was so strong he couldn't control the human glamour and it melted away to reveal the Draki underneath. As an Earth Draki, there were a few differences between Ladon and his sister. His scales were a dark, rich brown, with light browns and dark moss greens scattered throughout. His tail was much shorter and thicker, used more for balancing. He had huge strong claws and, the most noticeable difference, no wings.

Ladon was still blinking in shock, gaping at the humanoid dragon in front of him, whilst Cyan just giggled at his side with a mischievous grin on her face. Seriously though, there was an actual dragon in his house so you forgive his momentary lapse of speech! Cyan just rolled her eyes then pinched her brother hard, her claws digging into his scales but not enough to hurt him (he had super strong scales anyway). Feeling the pinch Ladon flinched and looked over to his older sister with a glare. However he knew that she only did it to get him out of his frozen shock so he smiled softly a second later and her return smile showed they were on the same page. 'Go on.' She urged her younger brother, pushing him towards Raiden. Ladon gulped then looked towards Raiden and attempted a nervous smile (seriously, Cyan and he had been raised on stories of the awesome power of dragons so having Raiden here was like having both a celebrity you loved and a nuclear bomb in your living room). His big sister had always been the wild one whilst Ladon was a little more shy and wary. But still, for a dragon, he would try his best. 'Umm...yeah. Sis and I aren't the same' The boy said nodding and clenching his claws automatically. 'Cyan is a Water Draki, as I am sure you already know. I am an Earth Draki.' Ladon stammered, blushing a little at his awkward nature. 'Sis has wings because Water Draki can use them in the water and it helps going over waterfalls and such. Earth Draki on the other hand, we are creatures of the ground and mountains. We like to dig and explore the earth so having wings would be a hindrance. They would get bashed too much when exploring cave systems. So we evolved without them. That's also why my scales are different, my claws are much bigger and my tail is shorter. They are all adaptations for life within the ground.' Ladon finished, full on blushing now. He had always been more studious than his sister and loved books and learning but he didn't know how his little speech would go down with the dragon. Ladon had tried to explain his best but what if he messed up!
Cyan had been watching her little brother with an encouraging smile on her face. She knew Ladon was a little star struck and a lot nervous but she wanted him to try and he was doing a great job. She was really proud of him! When he finished she launched herself at him with a hug then slung her arm over his shoulders in comfort and solidarity. Feeling him press into her side she knew he had needed the comfort and squeezed his shoulder a little. 'So there you have it!' Cyan said to Raiden with a bright smile.

((Hey Mickey!! I'm so so sooo sorry! I completely forgot about this rp! It was only when I was sorting my characters out I found Cyan's sheet and remembered. Sorry!!! Please forgive me!!))

((Hahaha!! Its all good! I totally forgot about it to until recently! I am happy to continue if you are))

Ladon blushed deeply at the dragons response. He had never been called beautiful before! Especially not by a dragon he had just met! The boy opened his mouth then closed it again, not knowing how to respond. Thankfully his big sister was addressed and she answered, giving him time to formulate a response.

Cyan frowned a little in thought then shook her head. 'Nah!' She said cheerfully. 'I mean, Ladon is beautiful.' She continued, voice casual yet confident. 'And sure I would love to show everyone how beautiful and amazing my little brother is. But HE doesn't want that. Ladon is shy and doesn't want to flaunt his beauty. It doesn't matter as much to him as it does to you and me. And if I forced him, I would only be hurting him. I would drag him away from something he loves, something that makes him him, and hurting my brother is the worst possible thing for anyone to do. So...no, it doesn't bother me that no one sees him. For its his choice. And anyway, Ladon has a hidden beauty that few can see and maybe that makes it even more special.' She finished, looking over at her brother with a smile and giving him a hug.

Ladon meanwhile had been stunned speechless at his sisters speech. When she finished and gave him a smile he hugged her back tightly, putting all his thanks and love into the touch. He then pulled away and turned to Raidon. 'Sis is right. I don't really care about others seeing me. I am happy in the ground and happy with knowing that the people who matter find me beautiful. That's all that matters to me. And I love caves. Others may not love them but I do. I love discovering them. Finding cathedrals of stone made by mother nature. Secret hidden places where gemstones of all colours and sizes shine bright like stars.'