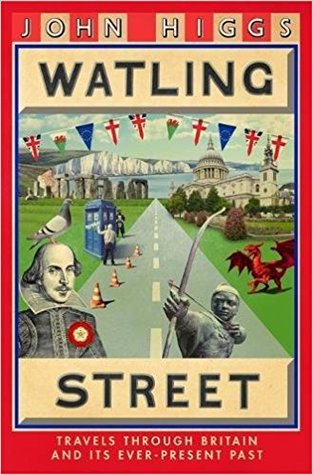 On the same night I saw Alan Moore give a talk (Wednesday 24 May 2017) , I also saw John Higgs. The whole event was themed around his new book 'Watling Street: Travels Through Britain and Its Ever-Present Past'. I've just started it.

'Stranger than we can Imagine: Making Sense of the Twentieth Century'

If this one is up to the standard of those two then I'm in for a treat.

Mod
By the by, I just read and loved this, about being British, at the start of the book...


Our sense of national identity is is fearful and troubled in these days of uncertainty, austerity and blame, and we are going to have to go in deep if we want to cure this division.

We are seeking a better sense of national identity. Not one that is imposed on us by the state, monarchy or military, but one which bubbles naturally out of the land - an identity that is welcoming, not insular; magical rather than boorish; creative rather than triumphant. It is out there, waiting for us, and if we head out of the front door and follow that road, we will find it. It is an identity fit for those who would live nowhere else in the world, but who wince at jingoism and flag-waving. It should not make anyone proud to be British; it should make them delighted to be British.

A journey along one of Britain's oldest roads, from Dover to Anglesey, in search of the hidden history that makes us who we are today

Long ago a path was created by the passage of feet tramping through endless forests. Gradually that path became a track, and the track became a road. It connected the White Cliffs of Dover to the Druid groves of the Welsh island of Anglesey, across a land that was first called Albion then Britain, Mercia and eventually England and Wales. Armies from Rome arrived and straightened this 444 kilometres of meandering track, which in the Dark Ages gained the name Watling Street. Today, this ancient road goes by many different names: the A2, the A5 and the M6 Toll. It is a palimpsest that is always being rewritten.

Watling Street is a road of witches and ghosts, of queens and highwaymen, of history and myth, of Chaucer, Dickens and James Bond. Along this route Boudicca met her end, the Battle of Bosworth changed royal history, Bletchley Park code breakers cracked Nazi transmissions and Capability Brown remodelled the English landscape.

The myriad people who use this road every day might think it unremarkable, but, as John Higgs shows, it hides its secrets in plain sight. Watling Street is not just the story of a route across our island, but an acutely observed, unexpected exploration of Britain and who we are today, told with wit and flair, and an unerring eye for the curious and surprising.

Mod
Absolutely loved the section about spirituality and politics - both as forms of moral authority, and how spirituality will always trump politics. This is illustrated through the example of Brian Haw. A brilliant chapter. 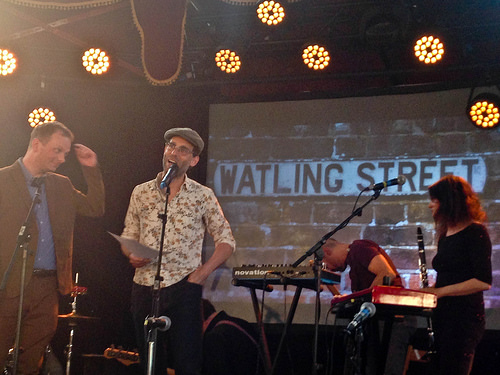 Three visionary authors – Alan Moore, Iain Sinclair and John Higgs – gather under one roof to take an epic journey through Britain’s hidden history, geography, myth and culture, as they travel west along one of Britain’s oldest roads – Watling Street – from Dover to Wales, via London and Northampton. Along the way Moore, Higgs and Sinclair reveal a country haunted by John Crow, St Alban, William Blake, Rod Hull and Emu, James Bond and stranger ghosts of its past – as they unearth an identity of Britain that transcends our current Brexit divisions.

Adding music and visuals into the mix, David Bramwell’s eight-piece, Oddfellow’s Casino, provide songs themed around Watling Street and the Principality of Sealand. joining them will be The Shoreham Sea Shanty Choir, run by Sussex folklorist Chris Hare, who’ll also be performing the odd ditty.

Mod
I'm just enjoying a marvellous section on Southwark Cathedral and the Crossbones burial site - for centuries a paupers and outcasts graveyard including the Winchester Geese, medieval sex workers licensed by the Bishop of Winchester to work in the brothels of The Liberty of the Clink, and which lay outside the law of the City of London.

In 1996, during the building of the Jubilee Line Extension, the poet John Constable has a vision in which ‘The Goose’ revealed the secret history of Crossbones.

Amazingly there is now a small garden of remembrance despite the land being worth a fortune.

I have this sitting by my chair, Nigeyb, as I was lucky enough to get a review copy. I don't think I will get to it for a little while, as I have too many books on the go, but I should read it this month. Look forward to comparing notes.

Mod
Splendid news Susan. It's ticking all my boxes at the moment. Indeed the combination of Watling Street: Travels Through Britain and Its Ever-Present Past and Alan Moore's Jerusalem is completely intoxicating. I cannot praise Jerusalem highly enough although, such is its heft, I'll be ploughing through it for weeks. But, y'know what, I don't care. It's dazzlingly wonderful.

Good to hear you are enjoying your reading, Nigeyb :)

I also enjoyed Watling Street, Nigeyb and am currently reading a book I think you would enjoy - it is on NetGalley if you are interested.

Long Road from Jarrow: A journey through Britain then and now

I enjoy Stuart Maconie's books generally and this is very good so far.


I've read other books by Stuart Maconie and like them, and I've often thought I should know a bit more about the Jarrow March.