Rachel Lindsey (Attorney) is ABCs first African-American Bachelorette. The two-hour premiere tonight (May 22) will feature 31 men (of various ethnic backgrounds) vying for Rachel's attention and the ultimate goal of winning her love.

I hope as many as possible tune in to silence the naysayers that say nobody wants to see an African-American woman find love on TV. Let's prove them wrong.

I can't wait! I'll wake up my daughter to watch with me! Thanks for the reminder.

Gisele wrote: "I can't wait! I'll wake up my daughter to watch with me! Thanks for the reminder."

I know right, this is pretty historic. :-)

I have never watched a single episode of the Bachelorette (the Bachelor, back in the day, yes, but haven't done so in like 10 years).

But Of course I had to watch this! I watched this On Demand. I have to say I was really impressed with Rachel. She's charming, poised, witty, thinks on her feet, warm, knows how to read a room, has great comebacks. Most importantly she is a Grown. Ass Woman!

I haven't formed any huge impressions on the guys except for the ones I hated. But overall they seem like a handsome bunch.

Bryan - He is a little tooo smooth. If this were a romance novel he's be the semi-villainous rival.

Josiah- Had a great back story and also seemed really cool. But he was waaay too cocky. If this were a romance novel, he's be the nice other guy that she just doesn't seem to spark with.

Kenny - The wrestler guy with the cute daughter. He seems nice too. But if this were a romance novel he'd be the boyfriend she is staying with because she loves what he and his daughter represent. But she's is secretly longing for the hero.

Peter - So damned normal that I immediately liked him. He was refreshing in that he had no gimmick. Also he is hands down the best looking one of the bunch. He used to be a model and I found a picture of him. If this were a romance novel, he'd be the hero for real. 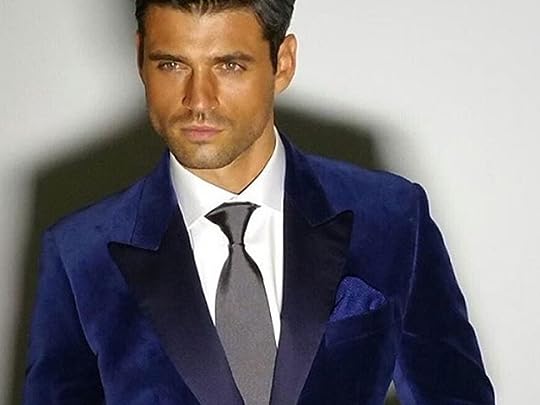 Like Tina, it's been a long time since I've seen this show and the formula hasn't changed much -- at all. LOL

I loved the selection of guys. I'd love to have seen more Asian guys and some Native American guys thrown into the mix as well.

I really wanted Rachel to pick the Asian guy ... Blake K. but they didn't show his backstory or conversation with her. So there may have been no chemistry.

I loved Rachel and her humor and how she rolled with the punches and the crazies trying to capture her attention.

Some men made absolute fools of themselves: Blake E. (his penis talk was a total turn-off) and he comes off as weird. Whaboom is even weirder and some others that I don't know their names were just strange acting.

Peter comes off as hot and normal. As Tina said and I agree, I liked that he didn't resort to shtick in order to capture her attention and frankly he doesn't need it.

I liked Josiah and I knew he was setting himself up for a big let down with his overconfidence. It was interesting to see the faces of the other men while Josiah was spouting off. Some of them seemed a bit intimidated.

I also thought it was interesting that Rachel has been warned about DeMario but has decided to wait and see before she condemns him.

Bryan, the chiropractor scooped in real quick and I was surprised at her reaction.

Men that stood out:

Cuties: Peter, Dean, DeMario, Josiah, Eric, Kyle, Lee and Will and others.
Crazies/Weirdos: Blake E., Lucas (Whaboom), Mohit and ventriloquist guy and others that may currently be flying under the radar.

The look ahead is certainly rife with drama. The villain, the men there for their 15 minutes, men there with girlfriends etc. I love the early talk of men confident that Rachel is going to be their future wife.

I am convinced that (view spoiler)[stupid Whaboom guy (hide spoiler)] is a producer's pick. If you look at her face when she offers him a rose, she is not as warm and smiling as she is when she looks at some of the other guys.

I also liked Blake K. the Asian guy and wished there was more Asian or Latino representation. But at least there was a good variety of black guys because I was almost thinking either there wouldn't be enough black guys or that there would be only black guys. But, real talk, the black guys seemed to be taking the process a lot more seriously than the rest. At least that what their talking heads felt like. Although Peter is still my number 1 draft choice.

Disliked: Blake E. and Lucas (Whaboom) feel like they are in it for their 15 minutes. The Lee guy looks like he thinks he is on Survivor instead of the Bachelorette.

Ohh and what about Dean "once you go black..." OMG! Rachel was way more gracious than I would be.

Of the guys I liked on first impression that aren't Peter: Eric, the personal trainer guy. He has great eyes and a pretty smile. Also seemed refreshingly normal. He's my number 2.

Diggy was cute as a button. Great fashion sense, but he seems like a mismatch on first impression. Still cute though.

Outside of Josiah, Kenny, Bryan, Iggy and Fred all the rest just seemed to blend.

I am convinced that [spoilers removed] is a producer's pick. If you look at her face when she offers him a rose, she is not as warm and smiling as she is when she looks at some of the othe..."

Tina: I agree -- there is just no way she would have picked him. Apparently acting crazy is good for TV ratings? I forgot about Dean, she took that remark like a trooper, but I was appalled -- just as I was with Blake E's video. Promos made Lee look like a villain and perhaps vying to be the next bachelor. I liked the wrestler, though I was curious to know how Rachel felt about dating a guy with a child.

Diggy is (likable) a bit of eclectic clotheshorse shoe collector, there would be no room in the closet for Rachel's stuff and that's definitely not going to work for her. I didn't like the no socks guy from Chicago, and I'm from Chicago -- there is something a little slick about him. He looks like he has ulterior motives for being on the show.

I'd loved to have been on Rachel's suitor recruiter or selection committee. LOL

This thread is making me curious. I might breakdown and catch the first episode Ondemand.

Paganalexandria wrote: "This thread is making me curious. I might breakdown and catch the first episode Ondemand."

Come back and share your thoughts after you've watched an episode.

So are y'all happy with how it all ended?

Paganalexandria wrote: "So are y'all happy with how it all ended?"

Pagan: I don't know how to feel. I'm still processing what I saw last night. Rachel clearly had deep feelings for both Peter and Bryan. Did she pick the right guy? Only time will tell -- but the statistics are working against them plus his mother is sure to be a problem in their relationship. Rachel definitely had chemistry with the last three men standing -- particularly, Peter and Bryan right from the (first) time they stepped out of the limo. I wish them the best.

Rosie wrote: "Paganalexandria wrote: "So are y'all happy with how it all ended?"

Pagan: I don't know how to feel. I'm still processing what I saw last night. Rachel clearly had deep feelings for both Peter and ..."

Well I guess it broke some barriers at least. I'm shocked anytime one of these couples actually marry, so real love is never an expectation from showmances.

I am. Out of all the guys, I only had three favs: Dean, Eric and Bryan. I really do hope Rachel & Bryan get married and live happily ever after. I'm not even shocked she picked him because when she did all her interviews she gave out the hint that her fiancé was very confident and I could automatically sense it was Bryan just based on how he appeared to be on the show. I think they are a really cute couple and I'm happy that Rachel found love. She deserves it. I just hope Bryan doesn't break her heart. I'm team Rachel all the way !

This is so funny, I just happened to come across a youtube of Rachel and Bryan. Apparently they are married and happy.