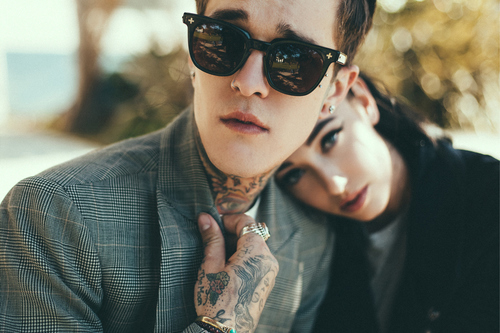 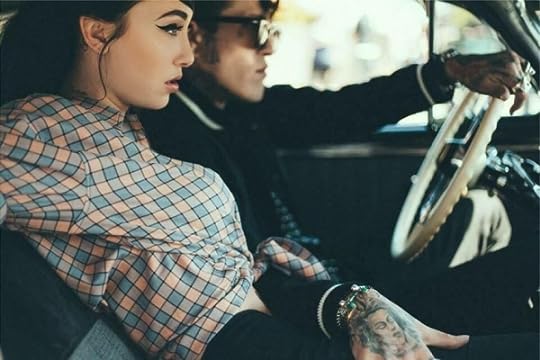 ⚫ Awesome do you wanna start first.

do you wanna maybe start with them being at a bar? since i think I'm gonna make jinx a bartender.

⚫ Sure, that works with me.

"one corona coming up," she announced, turning on her feet and walking toward the fridge that was full of alcohol. she grabbed the premium beer from its spot, walking back to her place infront of the counter where a guy awaited her arrival. she set the ice cold beer down, grabbing the cap opener and popping the cap off and sliding it toward him. "thanks m'lady," he responded, sliding the money in return. "uh huh," she muttered, grabbing the cash and placing it in the register. she glanced down the counter, looking for another guest to help. but no body was there, the people who were there we already being helped by her co-workers. she pushed off the counter, fixing her crop top before grabbing a rag and beginning to clean the counters off.

it was a friday night at the club she worked at, and it was packed, as usual. she saw both familiar and new faces. part of her prayed that something interesting would happen, to entertain her. otherwise she could make something happen. she smirked at the wicked thought. it's been awhile since satan has assigned her some dirty work, and she was starting to get bored. the worse thing a witch can be is bored.

Xavier walked into a bar with a small group of friends. " Come on, im sure Chloe won't kill you for a having a few drinks. " one said as he patted Xavier on the back, he sighed and shook his head as he glanced at his watch. He told his girlfriend he was going to be home before nine but it was ten-thirty. He knew he was gonna get a ear full when he went home, he shrugged his shoulders think. ' If I'm gonna get yell at, I means I minds well get a few drinks in' he followed his friends to the bar.

" We already order you something. " a friend said, Xavier leaned on the corner and nodded, he glanced over in the corner of the bar and spotted a pool table. He small smirk came to his face before he spoke. " After the drinks, I bet eighty that I can beat all of yall. " he said, their eyes followed his and they all laughed. " The old Xavier back. " a friend said.

jinx stepped over to the beer taps, beginning to wipe each one down. washing away all the extra foam and whatnot from them. it was only 10:30, therefore the night was only starting. the bar didn't close until 1am. she hummed lightly to herself, humming a tune from a spell she often preformed. but without saying the actual words, it was useless.

jinx glanced up at the entrance door, her eyes trailing to the group of guys that walked in. being loud as ever, like most guys were. nothing unusual about it, boys were boys. as they made their way toward her counter, she set the rag down and walked over. "gentlemen," she greeted cooly. her dark red lips turned into a small smile. "what can get for you tonight? a beer? perhaps a shot of vodka? you boys don't seem tipsy at all, you can use a few" she offered, winking playfully.

" I'll take a two shots of Vodka. " He said, he glanced over at the woman that stood in front him and it was something about her that his eyes didn't want to come off of her. A friend patted his back as he back to her. " And he wants three beers and three more for us sweetie. " Xavier sighed and shook his head. This was the reason Chloe wanted him to stop hanging around them, they brought out the worse in him. But sometimes he needed them to do just that, to take him off his stress.

jinx nodded in approvement, listing all the drinks they requested mentally in her mind. "sure thing, sweets," she commented before making her way to the fridge once more. she grabbing six bottles of beer, handling them by the necks. she set them all on the counter in front of the group. after setting the beer cap opener next to them, she grabbed two shot glasses. she gently grabbing the large bottle of vodka and popped it open. she poured the heavy drink into the two glasses, spilling some before closing it back up. "orders up," she announced, sliding everything over.

jinx glanced at the male in front of her who requested the two shots of vodka. she could already tell by his aura that he was slightly nervous. he must've left somebody behind she thought to herself with a shrug. "drink up hot stuff," she encouraged, giving him a smirk.

He took the shots like they were nothing, drinking wasn't anything new to him after all. That was all he ever did in his pasted. He had just put the second glass down when his phone started to vibrant, he sighed. And pulled it out and a pic of Chloe appeared on his phone. "Really dude. Come on, she can stay at home by herself for a minute." said Hunter, Xavier shook his head as he foot to his feet. " I'll be back. " he said as he walked off leaving his friends at the corner shaking their heads at him.

He walked outside before he answered the phone. " Hello.. " he said softly as he rubbed the back of his neck. He could hear her try to calm herself down before she spoke. " Where are you? And please don't lie to me... " she said, he could tell she was crying before she called making feel worser than he already did. " I am out with the guys. " he said knowing what was going to come out her mouth next. " Are kidding me Xavier!! " she yelled and he stayed quite knowing she wasn't down.

jinx smiled as she watched him down the shots. she raised an eyebrow as his phone began to vibrate, the beginning of a altercation between his friends. clearing her throat, she watched him leave the bar. she grabbed the rag she had previously, continuing her routine of cleaning the many alcohol bottles beside her. "lemme guess, girlfriend?" she asked the remaining friends, keeping her eyes focused on the bottle she was cleaning.

but she didn't exactly need an answer. jinx could hear the conservation from where she was, she used a trick her mentor taught her. so she was hearing the two's conversation quite well inside her mind. she furrowed her eyebrows at the females yelling, it was making her ears ring.

Hunter nodded when the girl asked. Everyone liked Chloe but it was just that she changed Xavier from the real Xavier, he was always anti-social but as long as it was the group he was cool but she wouldn't him do anything that didn't have anything to do with her. But Xavier clearly loves her. So they all had to deal with her.
__________

" I am jot going shit, promise. " he said, he never cheated on Chloe but she still had her trust issues. He sighed as she started yelling. " You fucking lying to me!! You know what don't come home, stay with them!! " she said before she hang up the phone. He sighed as he heard the click. He gripped the phone tightly as he walked back into the bar. He sat back down and pushed the bar that was sat out for him. He placed his phone down and ran his hand through his hair. " Three shots please. " he said, Marcus was another friend that was with him. He knew what was mostly likely said, just the way Xavier whole mood changed.

⚫ Are we still doing good this rp OOOOR