If we look at incarceration stats, strangely enough we'll see US and Russia starring among the countries with the highest incarceration rate per capita: 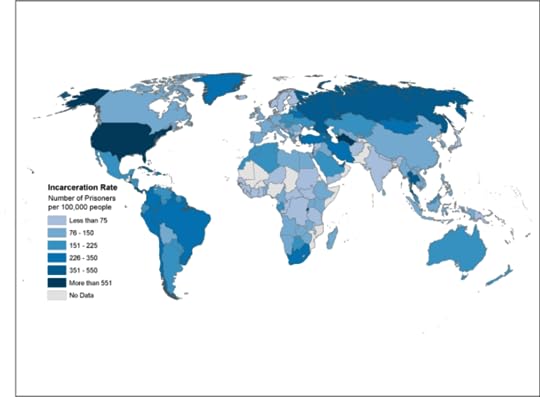 And also: https://en.wikipedia.org/wiki/List_of...
Where a sizable per cent of citizens are in the process or after serving time under different kind of parole and restriction.
In the Western world this is unparalleled. In Scandinavia figures being 10 times less.
Does it reflect a better work of law enforcement, a larger percent of those who see no other means to survive but through crime, anti-establishment sentiments or punishment emphasizing locking away over other types or maybe something else? What do you think?

I think better law enforcement is part of it. Thus the low rates in parts of Africa is probably due to poor enforcement. But I also think it depends on the social system. I suspect the collapse of Russia and the abandonment of state support is apr too the reason for the Russian problem - some people had no idea what to do legally, and others simply took advantage of the opportunities.

One New Zealand, an awkwardly high per centre of prisoners are Maori, and the reason is that the Maori left their tribal please and went to the cities, and a number of them formed gangs. The children of such gang members often have no support, and hence end up getting little education, so the job opportunities are not there, so they join gangs, and it perpetuates.

It's similar here in the states where African Americans make up a disproportionate part of the prison population while coincidentally occupying a disproportionate place among the poor. Opportunity doesn't flow equally and despite the end of the Jim Crow period, those schools with high percentages of African American students remained underfunded and underappreciated. The best teachers tend to go to middle class or private schools. and it gets worse when African American students are turned over to the police over school incidents that would earn white students simple suspension - once they have that on their record, their lives are pretty much over.

It's difficult in this country to get half-way decent work with a criminal record when we let companies freely discriminate on that basis. For a country of liberty, there are no second chances, and too often, even when people want to turn their lives around, they fall back on the criminal life because they have no other choice.

The sex offender registry is one thing I have a problem with. It's one of those feel-good programs everyone can get behind, but at the end of the day, what constitutes a sex offense that gets you labelled for life? If you've served your sentence, placement on that registry means you will always pay for a mistake. I know you can cite statistics about the rate at which these people continue the activities once their free, but this is supposed to be a country that believes in innocence until proven guilty. In our legal system, we're not supposed to be charged or convicted of crimes we "might" commit. But that's what the sex offender registry does.

Another issue I have is with this idea that felons lose the right to vote. The right to vote is supposed to be absolute. Our Constitution contains amendments to make sure groups previously denied that right have it. Yet, like the poll tax or the property requirements, this is another tactic to limit one of the most basic of our rights. Coincidentally, since African Americans occupy a disproportionate segment of our prison population, guess who is disproportionately affected by this.

I consider myself in the tough-on-crime camp, but I also believe once those crimes are paid for, those people deserve the same chance the rest of us have to set their lives straight. I believe they should not be judged on what they "might" do, only what they actually did.

J.J. wrote: "I believe they should not be judged on what they "might" do, only what they actually did. ..."

True. We have a famous actor, who's done his time in jail, but most theaters wouldn't take him.. The correctional facilities are supposed to correct, don't they? Sort of a double punishment.

Wasn't aware that felons might be denied the right to vote... Here they vote.

Twice ex-convict even managed to become a president of Ukraine.... although ousted by a popular uprising a couple of years later

Our prisons are supposed to make a priority out of preparing criminals for reintroduction into society, but I am not convinced they make much of a job of it. Only too many prisoners come out unable even to read and write, but in fairness to the system, in only too many cases number of them in the same place simply leads to gang warfare erupting. It is true that second chances are not easy to find, but equally a lot of the felons are not looking for second chances. If anyone has a solution to the problem of recidivism, it would be gratefully received.

I think it depends on the state...last year the governor of Virginia took criticism from Republicans for restoring voting rights to certain ex criminals.

I know Lizzie can give us some insight. I will say that in the U.S., harsh sentences have been given to people in possession of illegal drugs. I don't think the prison system is the place for them. Importing and distributing drugs is altogether different.