From uber Trek nerd Seth MacFarlane and regular nerd Jon Favreau, a new TV series in the vein of Galaxy Quest. If they can keep up the silliness, I might actually watch a Fox series again.

Speaking as a life long Star Trek fan, I found this trailer *far* more entertaining than the recent trailer for Star Trek: Discovery.

I wonder if this is MacFarlane metaphorically thumbing his nose at CSB while singing "Anything you can do, I can do better"?

I never thought in my life that I'd be grateful for Seth McFarlane but he seems to "get" Star Trek better than whoever is currently running the franchise.

So what do you think of The Orville after one episode ?

I hope it will go beyong that.
I liked to see the crew on the bridge like normal people, talking drinking, listenning to what's happening in the captain office ...!

The pilot wasn't that good to me but I understood what they were trying to do. The second episode was much more enjoyable.

I liked the second episode better than the first. It was entertaining without trying too hard.

The new Star Trek I just find confusing by the trailer. It looks like it is trying to be a movie. I'm just very wary. Also, my understanding is that we'll have to pay for yet another streaming service?!

I really enjoyed the first episode but haven't seen the second yet. I thought it was entertaining. Even the music was very Star Trek-y.

Managed to find a streaming site my anti-virus didn't object to and watched episode two.

Yeah, liked that a lot.

Half the fun is seeing all the subtle nods and winks to Star Trek in all its forms.

Trailers looked good (though then I kept seeing the same clips over and over again, which ended up getting annoying). First episode was . . . okay. Second episode was better. Though that's also the same episode that made me think that the ship looks like a sperm flying through space (not really sure why, and it's probably just me that sees that; knowing that it was a Seth MacFarlane show, I allowed myself to assume that it might actually intend to look that way).

I liked it well enough to keep watching.

I think the ship is kinda cool, definitely different from Trek but keeping the same sort of design. From the side it reminds me of a squid.

I'm just thrilled to see sci-fi shows like this coming back to the major networks. I know the series has caught some flak for its similarities to Star Trek, but I think some of those critics miss the point. I see it as more of a tribute to the series that many of us space opera fans know and love, and like what they are doing. I find The Orville very entertaining and I believe it has enormous potential. I plan to keep watching!

For people who've been dismissing the show as a lightweight and silly comedy, Ep. 3 should be an eye-opener. MacFarlane is interested in dealing with some weighty subjects (without abandoning the comedy).

I was pleasantly surprised. I watched it fully expecting to hate it but it was fun to watch. It was like watching and updated Original Series Trek more than a DS9 Trek

Trike wrote: "I liked it well enough to keep watching.

I think the ship is kinda cool, definitely different from Trek but keeping the same sort of design. From the side it reminds me of a squid.

I think the back is supposed to look like lips

Orville, love the fact that it is not just a fun fun slap stick comedy show.

Instead it is a serious show with comedy elements that fit really well into the "seriously" elements of the show.

Also love the fact that they don't overdue to slap stick in the show. It is more towards situational comedy that fits into the show.

Hopefully, the writers stay away from forced drama!

I was surprised at how good the show is. I was expecting Family Guy in space and instead we got a decent Trek clone. There is some of MacFarlanes humor in it to be sure but in small doses that break up the story and will probably help retain some of the casual viewers.
I was pleasantly surprised at the attempts at social commentary in the show. This is something that has been missing in the Abrams Trek movies and, so far, Discovery. It handled the issues in question, if not eloquently, in a thoughtful and humorous way. While it doesn't go as deep into the issues as the older Trek series would have it also doesn't suffer from the pretentiousness that typically accompanied those shows.
The cast is fun and its always great to see Penny Johnson Jerald in a staring/supporting roles. I've been a fan of hers since DS9 and am always happy to see her in new roles. The stand outs so far have been Bortus and Klyden. The actors do a great job expressing themselves through their makeup and their tone makes the marital discussions hilarious even though its a common theme in any marriage.

I like the social commentary. The ship annoys me. I think it needs some bumper stickers or something. The outside just looks unfinished to me.

The acting is good. My feeling of the first couple of episodes is that it couldn't decide whether to be a comedy or serious sci fi. I think by the last episode it found its groove a bit more.

I was annoyed that the first few episodes, it was all predictable. His ex-wife would be his 1st officer, they were transported to a zoo, etc. I was also annoyed by the "remake" of For the World is Hollow and I Have Touched the Sky episode. I really dislike rewrites of previous episodes, (like the new movies rewriting Khan).

All of that being said, I watch it each week and enjoy it as a comedy and as a tribute to Star Trek.

This last episode was too far-fetched for me and too slap stick comedy. Hoping this isn't a sign of issues to come.

I've only seen the first episode of ST Discovery but I agree with most people that this is the true spiritual successor to Star Trek.

I really liked the last episode(about social media). So far they've just followed Trek episodes but that one brought up new and very current social commentary.

My favorites so far were the one was the baby was born a girl and the one were they had to destroy the alien race aboard an alien ship in order to keep them from destroying an entire planet.

I thought the message was pretty simple "Don't let the mob think for you. Think for yourself."

I've worked out what the show reminds me of.

Specifically the way the writing can turn on a knife edge from comedy to drama within the space of a split second.

Reminded me of an episode of the television series Community. https://en.wikipedia.org/wiki/App_Dev...

I recently watched the second episode on Hulu. I was surprised at how good it was, even better than the first one.

The social media one reminded me a lot of a Black Mirror episode. It is very similar in idea - where people can thumbs up and down you basically. It's excellent if you want to check it out. I think it's episode 2 and is on Hulu.

The show's been renewed for a second season.

Excellent! I think it's worth watching for sure.

Just watched the episode Firestorm. That made me start thinking a crossover with Killer Klowns From Outer Space would be amazing!!

Chad wrote: "I was pleasantly surprised. I watched it fully expecting to hate it but it was fun to watch. It was like watching and updated Original Series Trek more than a DS9 Trek"

Really? From what I've heard it's more like The Next Generation, which is what makes me want to check it out because I hate that the new movies are all about The Original Series, something that I can only handle in small servings.

MorteTorment(Unofficial World's Fastest Reader) wrote: "Chad wrote: "I was pleasantly surprised. I watched it fully expecting to hate it but it was fun to watch. It was like watching and updated Original Series Trek more than a DS9 Trek"

I don't get that. None of that pompous Picard stuff.

I haven’t watched a lot of it (really only one episode), but I like it. It fits in the sweet spot of the Star Trek TV franchise pre-Discovery. Although I like Discovery, too.

So there's an Orville book coming out: 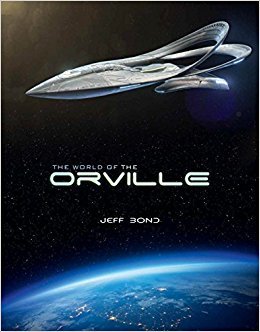 I'm excited. :)
Hope there are lots of schematics and maps and worldbuilding.