This topic is about Doting
14 views
Book Discussions (general) > Doting, by Henry Green 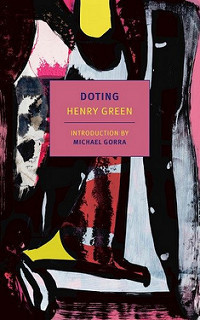 Doting, the last of Henry Green’s novels, is, as its title would suggest, a story of aging and yearning in which a wife and a brash young woman run hilarious circles around a hapless hardworking civil servant suddenly seized by long dormant desire. Like its immediate predecessor Nothing, it stands out from the rest of his work in being composed almost entirely of dialogue, and in both books, Green’s fascination with the extravagance, ambiguity, absurdity, and unintentional implications and consequences of everyday human communication leads to scenes that are as grimly funny as they are deeply sad.

Mod
Cover and description up!