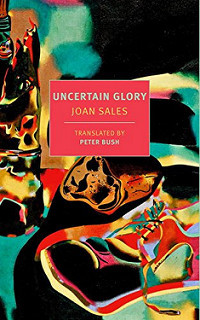 Spain, 1937. Posted to the Aragonese front, Lieutenant Lluís Ruscalleda eschews the drunken antics of his comrades and goes in search of intrigue. But the lady of Castel de Olivo—a beautiful widow with a shadowy past—puts a high price on her affections. In Barcelona, Trini Milmany struggles to raise Lluís’s son on her own, letters from the front her only solace. With bombs falling as fast as the city’s morale, she leaves to spend the winter with Lluís’s brigade on a quiet section of the line. But even on “dead” fronts the guns do not stay silent for long. Trini’s decision will put her family’s fate in the hands of Juli Soleràs, an old friend and a traitor of easy conscience, a philosopher-cynic locked in an eternal struggle with himself.

Joan Sales, a combatant in the Spanish Civil War, distilled his experiences into a timeless story of thwarted love, lost youth, and crushed illusions. A thrilling epic that has drawn comparison with the work of Dostoyevsky and Stendhal, Uncertain Glory is a homegrown counterpart to classics such as Homage to Catalonia and For Whom the Bell Tolls.