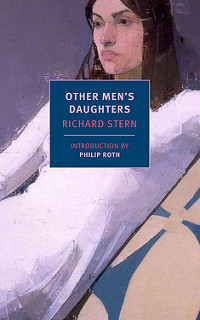 “Until the day of Merriwether’s departure from the house—a month after his divorce—the Merriwether family looked like an ideally tranquil one” we read on the first page of Other Men’s Daughters. It is the late 1960s, and the streets of Cambridge, Massachusetts, are full of long-haired hippies decked out in colorful garb, but Dr. Robert Merriwether, who teaches at Harvard and has been married for a good long time, hardly takes note. Learned, curious, thoughtful, and a creature of habit, Merriwether is anything but an impulsive man, and yet over the summer, while his wife, Sarah, is away on vacation, he meets a summer student, Cynthia Ryder, and before long the two have fallen into bed and in love. Richard Stern’s novel is an elegant and unnerving examination of just how cold and destructive a thing love, “the origin of so much story and disorder,” can be.

Mod
Cover is up!

Has anyone read Richard Stern's other works? I finished reading this book 2 weeks ago, and I really like his writing style.

Mod
This is the only Sterne I have read, I'm afraid. What did you think of it, sisilia? I thought it was terribly disturbing, but importantly so.

Trevor wrote: "This is the only Sterne I have read, I'm afraid. What did you think of it, sisilia? I thought it was terribly disturbing, but importantly so."

After reading In Love and Three Bedrooms in Manhattan, I didn't find this story disturbing at all. I liked how he dissect Merriwether's emotional journey. It sort of balances out everything; past vs future, guilt vs relief, young vs old

I really love his choice of words and metaphors. I took my time to stop and reread some of the sentences.