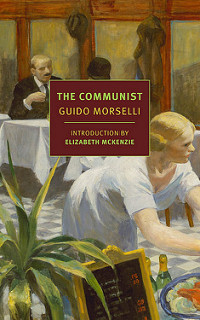 The Communist is the story of a life lived in the service of a faith and what happens when that faith is lost. Walter Ferranini, a child of Italy’s agricultural heartland, begins as an earnest autodidact who works as a labor organizer before being driven, under Mussolini, into exile in the United States, the belly of the capitalist beast. After World War II, he returns to Italy and enters parliament as a communist MP. Then Khrushchev’s 1956 denunciation of Stalin’s crimes leads to a crisis in Walter’s life. He has come to question that most basic communist belief, that human life finds its fulfillment in labor, and he writes an article expressing his doubts. It is a scandal, as, in the eyes of the prudish party elders, is his new relationship with Nuccia, a journalist who is a married woman. Under these circumstances, Walter is invited for the first time to visit the Soviet Union, and there he finds himself bewildered beyond words.

In The Communist, Guido Morselli portrays a man of conviction cast adrift with deep and compelling sympathy.

Mod
Publication pushed back a week from August 29 to September 5.