Mod
The Violins of Saint-Jacques 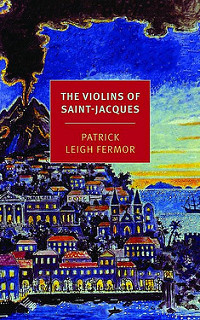 Patrick Leigh Fermor’s only novel displays the same lustrous way with words as his beloved memoir of his youthful walk from the Hook of Holland to Constantinople, as depicted in his travel trilogy: A Time of Gifts, Between the Woods and the Water, and The Broken Road. This slim book starts with the meeting of an English traveler and an enigmatic elderly Frenchwoman on an Aegean island. He is captivated by a painting that she owns of a busy Caribbean port in the shadow of a volcano, which leads her to tell him the story of her childhood in that town back at the beginning of the twentieth century. The tale she unfolds, set in the tropical luxury of the island of Saint-Jacques, is one of romantic intrigue and decadence involving the descendants of slaves and a fading French aristocracy. Then, on the night of the annual Mardi Gras ball, a whole world comes to a catastrophic and haunting end.

Mod
Publication date moved up one week to July 11.