Mod
A Favourite of the Gods & A Compass Error 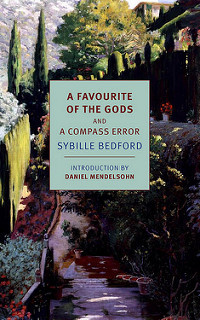 A Favourite of the Gods is the story of two generations of a single family, united by a strong matrilineal bond but divided by the customs of their differing nationalities. Anna Howland, the matriarch and American heiress, born in the 1870s to a prominent, liberal New England family marries an Italian prince and makes her home in Rome; her daughter Constanza, the favorite of the title, inherits her mother’s beauty, intelligence, and wealth, along with her father’s Catholicism, which she soon rejects in the course of her unconventional but first-rate education.

When disaster strikes, Anna and the prince fall back on the conventional standards of behavior of their disparate cultures; Constanza, with her European upbringing, is free to develop her own moral code, to plot her own course in life, and she does so with fantastic daring, making an unconventional life for herself in England and on the continent at the time of the first world war and its aftermath.

Her own daughter Flavia, introduced in A Favourite of the Gods, is the heroine of A Compass Error, which begins where the first novel concludes. Flavia too is a brilliant young woman, though both more brash and more faltering than her mother, studying in France for her entrance exam to Oxford when she becomes involved with a mysterious woman whose arrival at a sensitive moment in Flavia’s adolescence will alter both her and her mother’s lives forever.

Mod
Pushed back one week to June 13.

Mod
Pushed back to July 11.