Mod
History Is Our Mother: Three Libretti: Nixon in China, The Death of Klinghoffer, The Magic Flute 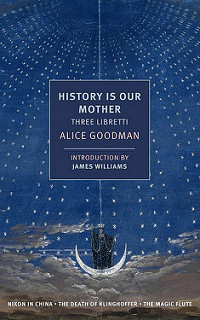 Nixon in China and The Death of Klinghoffer played a crucial role in bringing opera back to life as a contemporary art form, and they have been popular—and, in the case of Klinghoffer, highly controversial—ever since they were first staged by the director Peter Sellars in the eighties and nineties. Both operas were conceived from the start as collaborations between composer and writer, and their power is due as much to the dazzlingly constructed and deeply felt libretti of the poet Alice Goodman as they are to John Adams’s music. Nixon in China is a story, at once heroic, comic, and unnerving, of men and women making history and of their different conceptions of what history is and what it means to makes it. Klinghoffer, by contrast, has at its center the tragedy of an innocent man condemned at the cost of his life to play a part in history. History Is Our Mother, which takes its title from a line sung by the title character in Nixon in China, brings Goodman’s two libretti together for the first time in book form. Included alongside Goodman’s no less inspired translation of Emanuel Schikaneder’s famous libretto to The Magic Flute, these vivid dramas of character and searching meditations on fate are here revealed as among the most original, ambitious, and accomplished poetic achievements of our time.