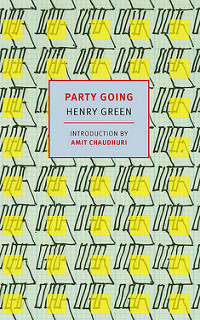 Party Going, written after a long hiatus in Green’s career as a writer, is a dark valediction to the “low dishonest decade” of the 1930s composed, however, with Green’s unfailing ear for human conversation and loving eye for ornamental detail. As John Updike has written, “Silly young rich waiting for a train to take them away would not seem a momentous topic, but Green magnifies them into a paradigm of life, life surrounded by a fog of death and threatened Departures.”