Mod
The Farm in the Green Mountains 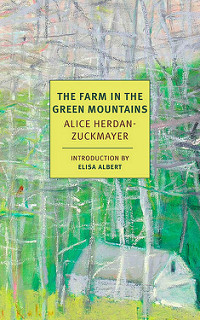 Publication Date: May 2, 2017
Pages: 232
Introduction by Elisa Albert
Translated from the German by Ida H. Washington and Carol E. Washington.
Originally published in 1949.

The Farm in the Green Mountains is the story of a family finding home—halfway across the world from their homeland.

Alice Herdan-Zuckmayer and her husband, the playwright Carl Zuckmayer, lived at the heart of intellectual life in Weimar Germany, counting among their circle Stefan Zweig, Alma Mahler, and Bertolt Brecht. After Carl’s work fell afoul of the Nazis, however, the couple and their two daughters were forced to flee Europe. Los Angeles didn’t suit them and neither did New York, but then a chance stroll in the Vermont woods led them to Backwoods Farm, the eighteenth-century house where they would live for the next five years. In Europe, the Zuckmayers were accustomed to servants; in Vermont, they found themselves joyfully building chicken coops and refereeing fights between unruly ducks. Despite the endless work a new farm required and brutal winters that triggered bouts of melancholy, Alice discovered that in America she had found her “native land.” And her generous, surprising, and witty memoir, a bestseller in postwar Germany, has all the charm of a love story with a happy ending.

Sounds perfect for me!