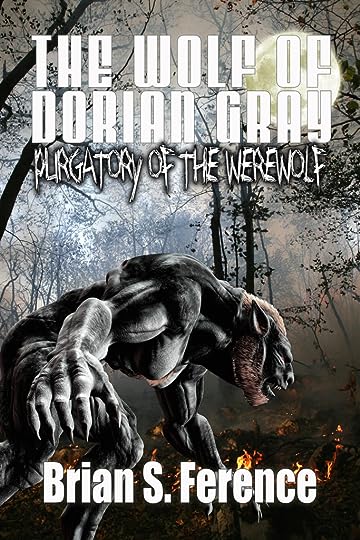 The plain white lettering blends a lot into the top of the cover, and it's playing tricks on my eyes.

I agree with Thomas. I am not a fan of the white letters, but I love the color of the purgatory part!

Thank you, i will try a yellow perhaps, my concern is if the thumbnail is very small, i originally had red and its hard to read on small thumbnail

Mod
I think it's the text as much as the color of the letters. That font is funky, imo. I would look for an easier to read font. Course, I've been told my choice in fonts is shitty....so take my advice with a grain of salt.

Have you tried switching the style you used for the purgatory sentence to the top part and white for the bottom line? I am not sure which line is the title and the one that is subtitle because if Purgatory of the werewolf is only the subtle it gets more attention than the title.

Did I say already I loved that metal feel of that font? :P

Thank you! Its book two Purgatory of the Werewolf, but i think the series The Wolf of Dorian Gray has better recognition. Does that make sense?

Yep I get what you mean. I did the same myself so... Then you succeeded.

How about the same red as the first book? Just trying to add something to link the two books together, and maybe having the title of the series the same color would do it?

Other wise, maybe try a darker color around the letters to make it look a bit 3D ish?

I am like Riley. No even worse...I couldn't do a cover even if my life depended on it. So I may not be the best to give you advices.

Honestly, I like it enough to leave it like that too so...don't mess with it too much. :P

Okay, what about this variation with title switch and yellow color: 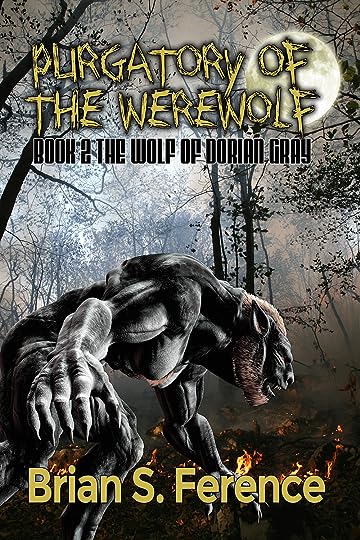 I agree with everyone, I think.you should change the white lettering.

or slightly brighter yellow, with white instead of black subtitle text 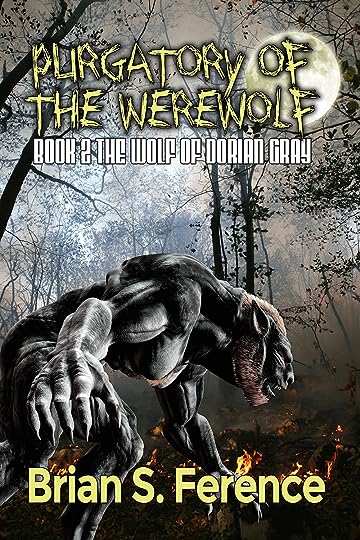 I asked the hubby since I am not a good judge. His first reaction was I LIKE BOTH... and then when I waited for an actual more precise answer, he said he liked the one with the yellow letter better.

I was going to ask if the title wouldn't be better in white instead of black and while I was checking what it looked like in smaller size using my ipad, I noticed you had tried it.

So I asked the hubby again, and he said the white is better than the black... he is a fan of the fantasy genre by the way. I wouldn't have asked him if not. :P

As for me, as usual, i liked all three versions and I would be damned if i could decide which one lol 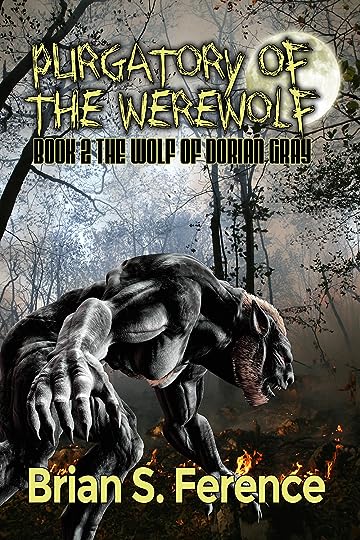 OH!!!! I like that one !! lol (But I bet you already knew I'd say that. :P)
Seriously, I think the yellow around the black ties everything together, but that could just be me.)

That was my thinking but now i don't know whats best lol. Thanks for your input!

Mod
That last one looks good to me. The lettering is a bit hard to read still though.

Maybe... but it catches the attention enough to go and have a look at the blurb no?

Brian wrote: "Okay, what about this variation with title switch and yellow color:

"
I like this one Brian, it's an awesome cover!

To be precise, I mean the variation in message 10.

Thanks everyone, ill play around with it some more

Brian wrote: "Thanks everyone, ill play around with it some more"

I know I'm probably too late to the game, but...Why not flip your name off to the side so the werewolf isn't obstructed? Or add just a tad bit more separation between the title and subtitle, which could also be just a sconch smaller. (I used to work in print advertising.) 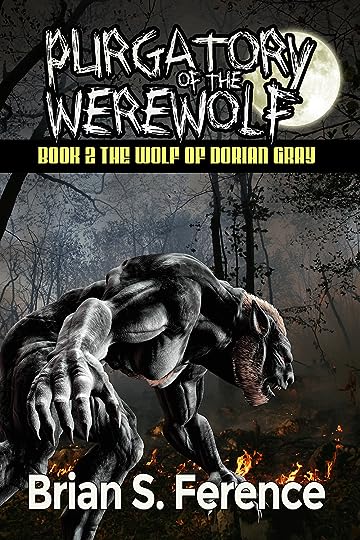 Getting better. Only worry is readability in a thumbnail....

Oh you put back the silver one that looks like metal! (Yellow looked good too but had a less metally feeling to it.)

Also everything looks more centered on this one. Love it!
I am really not of much help. Sorry! But I can say I like the last one better. :)

Thanks! Jane, yes thumbnail is large concern, thats why i went back to white for title and enlarged

My 2 cents - I like the first one. The white writing has a 'drained of life' look about it: ghostly but really there. I like the picture and it doesn't interfere with looking at the picture, and then I see the title Dorian Gray and since I loved The Picture of Dorian Gray, interested in a take on just where exactly he went.

I like the most recent version, except the yellow on the black for "Book 2..."

It makes the lettering look blurry and also clashes with the other white lettering.

Thank you for the input! Hmm let me play around with it a little more

When I asked if you could try changing the letter fonts for one another, you interchanged the titles in the process. I liked it, but ML has a point. You were saying that the title of the series might have more recognition. Maybe you should try reverting to the original positions of the two titles and change the fonts only?

Another version very slight glow added some places and color change. Tough decision about the title vs subtitle. 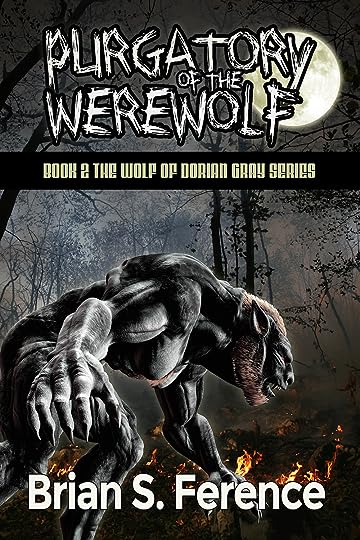 I like this last one the most, not sure I like how big your name is at the bottom in plain white font though. Also not sure about the font choice in the black band. I think there needs to be something that makes the letters compliment rather than contrast your visually themed title.

You have three types of font going two of which seem out of place to me. 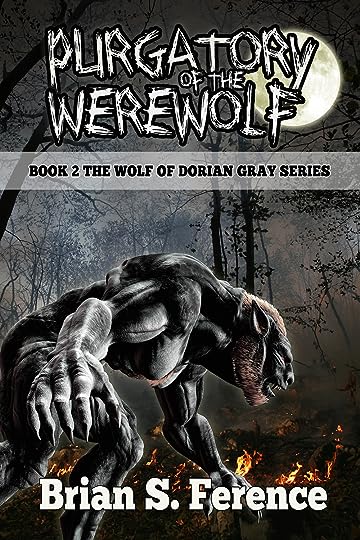 I like it. Only the S in the middle looks huge.

The last cover is starting to get there. What I would do is darken the entire back image to give it a sinister look, keep the werewolf in the same light so he stands out aswell as the flames at the bottom and put a red wash over the moon so it looks like a blood moon. That will add a bit of scary emotional depth to the cover. Then keep the title as it is (awesome font) but remove the black outline because it makes it look unprofessional and maybe make the writing a bit bigger to replace where the outline was. Your author name should be in all caps and the same font as the the subtitle.

I like the picture. If you did make the background darker, you would need a halo effect around your monster. I do like the idea of making the moon a reddish color.

The second book thingy...I don't like it on a strip. I would also prefer the title be bigger and that second thing smaller and free floating like the title. I find the stripe, no matter the color as taking away from the title and author name.

I could also see your name in the same font as the title. just a thought.

Okay, sooo, I dig the image. Quite a bit. But I'm not a huge fan of the font combination. My least fave would be your author name. Just the font, haha!! I actually prefer what you used in this edition:

Hmm. I purposely didn't read your blurb so it would be a "blind" reaction and not skewed somehow. Cover alone? Especially with the scratchy font (which I don't mind)...

I'd guess the book is targeted at a younger audience. R.L. Stine's Goosebumps-esque, ya know?

Anyhoo, gonna post this sucker and go read your blurb to see if I'm right LOL Best of luck!!

This is all really great to read! I wish that I had joined before I made mine but I will certainly share with you guys first for my next one

Thanks for the feedback! Ill do another version Monday!

It's awesome. Don't change a thing.

@Robert new version via your suggestions. What does everyone else think? 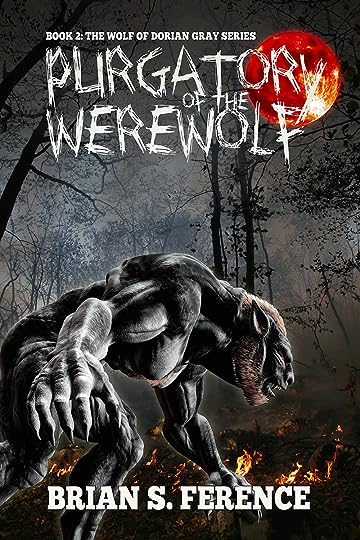 I don't really like the red moon and the font lost its metal look, which I loved.

The white moon looked mysterious and natural. The red one feels out of place, and unnatural but not in a good way...kind of like if a child had lost his helium balloon. (Sorry!)

I prefer the other versions over this last one.

good input, i did do a cool filter on the image which is slightly different. Do people think red or white moon looks better? 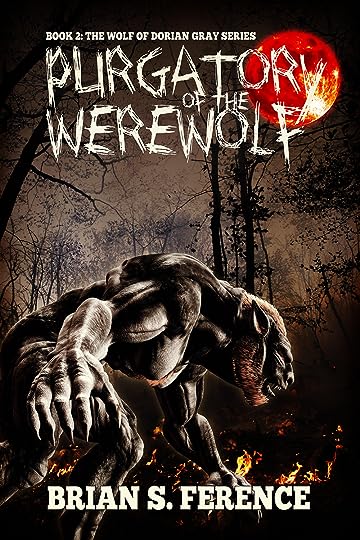 what about with this red moon: https://www.shutterstock.com/image-ph...

IF you feel you must go with a red moon, it might just be me but i prefer the red moon with the white crescent. The third one under the one you chose. It would kind of incorporate it with the font's color and it's a full moon, which fits better with the werewolf theme.

(In case they change the pictures around...this one here: https://www.shutterstock.com/image-ph... ) 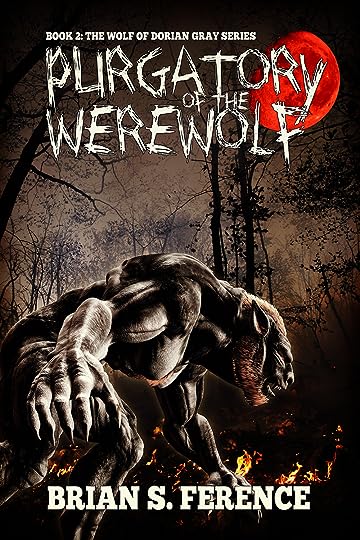 @GG the white crescent is good too

I like the Red moon. Looks more sinister, if that's what you're going for.

Thx, yes, i was thinking its good red moon not full, i can incorporate that into the story