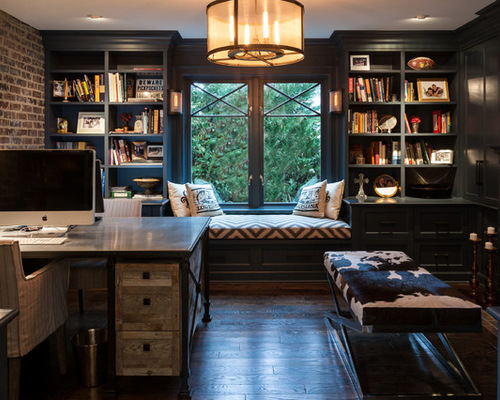 Pontus' Office is located right next to his classroom. In fact, the only way you can reach it is through his classroom. There's only one door on the left wall that's usually locked up tightly, unless of course it's after school and he's inside of it grading papers. His office is always kept neat and tidy, being that Pontus is a bit of a clean and tidy freak. Besides, who can work in an office that's constantly dirty or messy? His office has two bookshelves with a lot of books that usually have to do with oceanography. However, you can also find some books about Astronomy, which is odd, considering he doesn't teach that class. He has a window that opens out that he keeps locked at all times, the key being hidden somewhere in his dorm room. By that window is a window seat. This is probably the spot he spends the most. He grades papers on his computer, but he reads on this very window seat. It's really calming and soothing and has a beautiful view of the trees that surround the campus.

Mod
Pontus sits in his office, quietly typing away at his computer. It was a Saturday night, around 12 am. His office was dark with only a few candles and the computer screen lighting up the room. He had to grade these tests by Monday and he'd prefer to do it all tonight. While he keeps his brown-ish yellow gaze on the screen, he reaches up and grabs a coffee mug, softly slipping away at the milky substance. It was a surprise he was here and not following Aion around. Truth be told, he missed following him around. Though it's only been a day and a half since he last did. But, he took his job seriously and knew he had to get these gradings done. Besides, the sooner he finished, the sooner he could go back to following Aion around.

Mod
Teaching astronomy made Aion restless, itching to explore the studious academy. But instead, he found himself more inclined to show up and pay Pontus a visit. More specifically, to appear at his window sill creepily, sitting down along the blanket, almost suggestively. His black eyes scanned the other, so called god of food draped against the cool glass window, "This is rather aesthetic. I didn't peg you as one who enjoys interior decor. Did you design this yourself?" he asked.

Mod
Pontus lightly jumps at the voice, blinking lightly. His eyes adjust to the darkness before he spots Aion. How did he get in? Did.. He come in through his door without him even realizing it? He eyes him lightly,"Yes, I just put stuff in here that I found interesting looking." He stops typing and leans back in his chair,"To what do I owe this visit tonight, Aion?" He questions with a slight tilt of his head. To be honest, he was really happy to see him, even though it was hard to tell, because he hid it well.

Mod
Aion raised his eyebrows and thought for a moment, biting his lip. Oh. Yes, a reason.. there had to be one... hmm. No he couldn't recall one really. He only shrugged, eyeing Pontus carefully, admiring his jaw line, the furrow of his brow.

Mod
Pontus eyes him before he stands up. As long as he was here, they might as well interact a little. He sits on his desk, eyeing him slowly,"Would you like some coffee? Or something else to drink?" He questions, placing his hands together on his knee.

Mod
Aion hadn't really needed much food to begin with. They were luxuries, but he enjoyed Pontus' cooking. He enjoyed Pontus. He stepped forward and eyed his computer, teleporting behind the desk and staring at the screen, "What are you doing on here?" he asked.

Mod
Pontus blinks, glancing over,"Grading papers." He had a lot of photos on his desk top, one of them being named Aion. Other than the papers open, his windows were open as well and had a bunch of pictures and facts about Astronomy. He figured Aion wouldn't see any of that stuff, being he had the screen minimized and the folder with the homework in it was open, so it was blocking his desk top. He begins making coffee, questioning,"You hungry?"

Mod
Aion eyed the tabs and began going through them, eyeing the astronomy facts without much restraint. ".. Not particularly. But I'm willing to eat" he replied, tilting his head and smirking very faintly to himself. He's cute he thought to himself.

Mod
Pontus eyes him before he grabs out a slice of pizza and warms it up. He glances over, raising an eyebrow,"I told you, it's just Homework I'm grading.." He heads over and hands him the slice along with some coffee.

Mod
Aion tilted his head, "I didn't realize you taught astronomy Pontus. Impressive" he taunted blankly, the corner of his lip perking up seductively, taking a bite out of the pizza. Pizza wasn't usually sexy. But he still managed to make it pretty damn sexy.

Mod
Pontus tenses, eyeing him lightly. God damn he was sexy. What are it more sexy was they were in an office. Sex in an office would be fucking hot. He swallows,"I.. Um.. Just wanted to read up on it.. You can never know too much about other.. Subjects.."

Mod
Aion leaned against the desktop and thought for a few moments, "Oh yes. Definitely. Broadening your horizons right? Who am I to stop you? So I suppose you wouldn't mind me checking your search history right?" he flirted, raising an eyebrow at him. He was never like this with anyone else. Only Pontus.

Mod
Pontus shivers,"A-Ah.. Um.. I'm.. Unsure if you'd find anything.. Interesting.." He whispers, allowing his eyes to scan him up and down.

Mod
Aion didn't even look at the computer, snapping his fingers and pulling up the browser history, eyeing Pontus before turning and gazing over it carefully.

Mod
Aion raised his eyebrows in intrigue, glancing at him inquisitively, "So do you have a type?" he asked, tapping his fingers against the desk, "That you look for, when you watch these videos?" he clarified.

Mod
"It does" he said calmly, tilting his head and gazing at him expectantly, "To me. Tell me." he persisted.

Mod
Pontus tenses. Fuck, he couldn't resist him. How.. Did it matter to him? He eyes him,"Pale.. Young looking.. Black hair and eyes.." He replies calmly, obviously describing Aion.

Mod
Aion listened intently and reached up, "You seem nervous" he fixed Pontus' collar, voice going low, "Would it lighten the mood if I told you my type?" he asked.

Mod
Pontus blinks in shock, allowing him to do so as he slowly nods. He didn't let anyone touch him, ever. Except Aion, of course.

Mod
Aion licked his lips, "Tall, brooding, dark eyes and a slight stubble along his jaw line. 6 foot and yet he still manages to look like a pouting puppy dog" he said monotonously, almost tauntingly.

Mod
Pontus blinks, eyeing him. Was.. He describing him? He tilts his head, reaching up and sofly rubs his thumb over Aion's bottom lip,"..That so..?"

Mod
Aion eyed him and suddenly teleported to the other side of the room, sitting on sill once more, continuing to eat his pizza, "Aren't you bored of grading papers?" he asked.

Mod
Pontus blinks, eyeing him. He nods, sitting on the desk again,"Indeed I am.. So, interest me, Aion." He orders blankly, keeping his gaze on him.

Mod
Aion tilted his head and leaned against the window, unbuttoning his jacket and letting it fall to the side before suddenly beginning to work on his shirt.

Mod
Pontus blinks again, seeming shocked as he watched, biting his bottom lip softly. He remains where he is, trailing his eyes on him, watching him unbutton each button.

Mod
Aion stopped at the last button and sat back, exposing his chest, "Are you interested?" He asked, legs parted slightly, his whole posture open and relaxed.

Mod
Pontus finds the corner of his lip perking up into a small smirk. He moves closer and stops in between his legs, placing a finger under his chin, whispering,"I am."

Mod
Aion eyed him and ran a hand down his lower chest, "Weren't you studying astronomy Pontus?" he purred, "Am I distracting you?" he taunted, biting his lip.

Mod
Pontus leans close, whispering seductively,"I want to study something else.." He smirks, suddenly kissing him.

Mod
Aion grunted and disappeared entirely once their lips met, letting him fall. "You're rather eager, aren't you? You've probably had this on your mind for a while correct?" he tilted his chin up, half smirking.

Mod
Pontus blinks, sighing,"I did. But I'm assuming you didn't?" He asks, now just sitting on the windowsill, keeping a gaze on him. He could play hard to get too.

Mod
Aion sat on his desk and leaned against the computer slightly, "You've been stalking me" he pointed out, raising an eyebrow playfully.

Mod
Pontus eyes him,"More like.. Observing.. How long have you known?" He questions, remaining where he was.

Mod
"A better question would be... have I ever not known?" he asked, gazing at him expectantly and smirking to himself.

Mod
Pontus blinks. Wait.. He.. He watched Aion play with himself.. Did he know about it then too? He eyes him skeptically,"..How?"

Mod
Aion tapped his fingers against the desk and shrugged slightly, "You made it obvious." he said simply, "It was easy to spot from the beginning. You aren't a very good stalker" he pointed out.

Mod
Pontus eyes him,"I see.. And why didn't you tell me before to stop me?" He pauses, tilting his head,"Unless of course, you wanted me to continue stalking you.."

Mod
Aion raised his eyebrows, "Or perhaps I didn't care? Perhaps I thought you'd like a show" he nearly purred.

Mod
Pontus blinks. This boy sure was amazing. He nods,"Perhaps I did.. I gotta admit I quite enjoyed it."

Mod
Aion smirked suddenly, "Enjoyed what exactly? I'm not quite sure what we're talking about" he suddenly spoke out, folding his arms and tilting his head to the side quizzically.

Mod
Pontus answers simply while still leaning back,"The show you put on." He keeps a blank face, but it's obvious in his eyes that he was intrigued.

Mod
Aion frowned as his attempt to throw Pontus off backfired a little. How pitiful. He shook his head, gazing at the computer screen after teleporting into the office chair, "Doggy style. What an interesting taste of yours, I would have never pegged you the type" he spoke.

Mod
Pontus tenses, heading over and leans over him, turning the computer off,"Alright, enough of that." He eyes him,"So, him. What now?"

Mod
Aion raised his eyebrows and frowned a bit, "But that was so entertaining." he almost whined, backing up just slightly and eyeing Pontus' papers to grade. "... You could always get back to work" he teased.

Mod
Pontus eyes him, leaning close to him,"Do you enjoy reading me, Aion?" He questions, locking gazes with him.

Mod
Aion gazed at him, staring into his eyes and tilting his head, "It's certainly entertaining" he replied quietly.

Mod
Pontus eyes his lips before he pulls away,"Very well. You may keep snooping on my computer then. But keep teasing, and I'm sure you'll regret it.." He bites his own bottom lip seductively before sitting back on the windowsill.