First look at David Tennant and Michael Sheen as Crowley and Aziraphale. 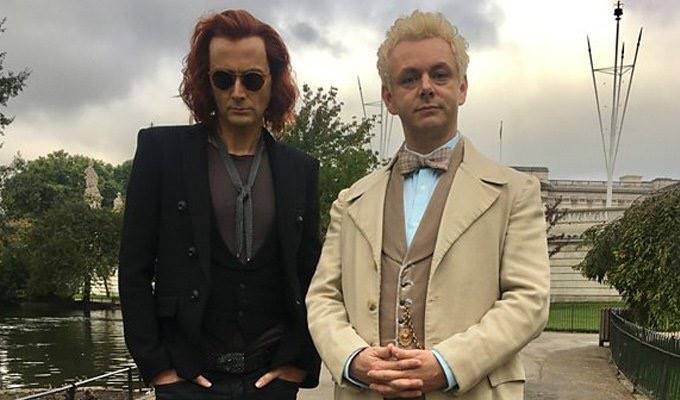 Books so often don't translated into good movies, or miniseries'. But I am glad that Neil Gaiman is getting paid. I'm definitely in favor of authors getting money!

Gaiman is going to beef up the role for the TV adaptation. I'm about halfway through the book now and haven't encountered him yet.

I don't really like the book but this looks good.

Trailer dropped today. Tenant and Sheen together means my head my explode.

Show launched today. Who's watching? I'm excited but I won't get a chance to until next week. Boo! Spoiler tags are appreciated.

I plan to watch Sunday with my dad (it's his birthday).

I just watched the first two episodes with my folks at their place and a fun time was had by all, which is promising considering the differing levels of familiarity we each had with the source material: I’ve read just about everything by Neil Gaiman and/or Terry Pratchett twice over, my mother has read a little bit of both over the years (including Good Omens), and my father has only had tangential contact with either of their works. If it can appeal to all three of us despite our disparate knowledge bases then I have very high hopes that it can gain critical and commercial success across a wide swath of demographics.

What I find especially promising is the fact that we were each disappointed that we had to call it a night after just two episodes - the last series to imbue that same yearning effect over all three of us was Avatar: The Last Airbender, and I’d say that definitely qualified as both a critical and commercial success with widespread appeal. I’m keeping my fingers crossed in the hopes that the rest of the series is as delightful as this promising start implies.

I watched the first episode last night and really enjoyed it. David Tennant is a gift.

Dara wrote: "I watched the first episode last night and really enjoyed it. David Tennant is a gift."

My wife still sees him as the Tenth Doctor (she hasn't watched Jessica Jones).

Watched all six episodes this weekend. Tennant and Sheen are terrific. It's nice to watch a complete story without real world or scripted distractions. I guess Neil Gaiman worked on the screenplay, which may be why it feels like a tight script.

I love Dog! Just watched the first ep, Sheen and Tennant are a fabolous duo.

Unfortunately I must say that I was a bit disappointed.

The interactions between Tennant and Sheen were great but I didn't like the tone of the adaptation.
I think it lacked in similar ways that Hitchhikers guide to the galaxy lacked when compared to its source material.

However if you guys like it, more power to you.

I’m only two episodes in, but so far I like it a lot. One of the things I really thought was fun, was the score. It seems to play off of other known properties to give you a familiar feeling for what scenes are going to be about, but has a default note similar to Sherlock. This last bit makes a lot of sense since it is the same composer.

I also really like the choice of actors, many of the smaller roles are full of actors I’ve seen in other things that I enjoyed as well.

One of my favorite authors ripped it to shreds on twitter the other day, but Sunday will be my binge day on it. I too love the actors involved and of course the book, so I will lower my expectations

I am now in episode four. Anathema and Newton's not my fave subplot in the book - I think they're useless and boring - and the TV version is only a bit better. What a waste of Jack Whitehall.

I did however enjoy the additional flashbacks of Az and Crowley.

Silvana wrote: "I did however enjoy the additional flashbacks of Az and Crowley."

Here's an article about the flashbacks...

Mark wrote: "Silvana wrote: "I did however enjoy the additional flashbacks of Az and Crowley."

Here's an article about the flashbacks...

Ooh, thanks for the article! That 30 minute sequence was my highlight so far.

Just finished. I liked it through and through. I hadn't read the book, so the story was new to me, and I really liked it. I liked its quirkiness, the directing, the acting, and like I said before, the score/ soundtrack. I liked how some of the twists were telegraphed, and some were more obscure. Overall, it just felt really well done. It felt more like an 80's miniseries, with the high production value, slightly bigger name stars, fully contained story, and it was a bit lighter as well. Not a heavy story like what HBO does.

Downloading the first 3 episodes to watch on the plane. V excited!

5 out of 5 flaming swords from this reviewer!

:D I think mine is 4.5 out of 5 flaming swords. I really enjoyed the tighter plotting (compared to the book), more focus on Az and Crowley's relationship (oh now they're my fave duo), tone, casting, music, humour, quirk (the Hell squad were my fave - Lord of Files haha)...... It's just so well done.

I wish the Night Watch series is as good as this. Vimes! Vetinari!

PS: Did anyone expect (view spoiler)[Death spoke in CAPS in this version? I did. (hide spoiler)]

Well, that was a good adaptation. All the actors nailed it, the kids were great. It flowed nicely.

Finished my binge last night. That was bloody brilliant.

A Christian group started a petition demanding that Good Omens be canceled by Netflix for being ungodly.

To which Neil Gaiman replied:

Neil Gaiman
@neilhimself
·
Jun 19
This is so beautiful... Promise me you won't tell them?

This makes me so happy. Gaiman's response was PERFECT.

I've watched 4 episodes and I'm not loving it as much as I thought I would. I'm enjoying it, sure, but I'm not in love with it. Aside from Aziraphale and Crowley. Sheen and Tennant are perfection.

We watched this as a family. We all loved it. My 9 year old daughter is now reading my paperback copy.

Finished over the weekend. It was okay but I didn't love it. It was at least an episode and a half too long. Tennant and Sheen's chemistry made the show sparkle and every scene without them suffered by comparison.

It did drag on a bit in Episode 6.

Crowley's swagger was bit much. That annoyed me as much as Negan's in "The Walking Dead"

Two episodes in. Loving Tennant in the role. The snake eyes are great.

The bit with the dog was hilariously done.

Tassie Dave wrote: "It did drag on a bit in Episode 6.

Crowley's swagger was bit much. That annoyed me as much as Negan's in "The Walking Dead""

Yes, episode 6 did drag and one particular scene in episode 5 stands out to me: (view spoiler)[When Aziraphale possesses Madame Tracey's body at the seance. That scene went on entirely too long. (hide spoiler)]

I enjoyed Crowley's swagger. It was exaggerated but I liked it.

Mod
I loved that scene. Miranda Richardson is one of my favourite actresses. She hammed that scene up splendidly.

Well, that was just frickin' amazing. Tour de force all the way through.

How to pick highlights? Some of the even-better parts of a great show:

* Tennant chewing up the scenery. He played the emo understated Doctor, now he's blasting through scenes turned up to 11.

* Sheen did the angst-filled, understated angel very well next to Crowley.

* Ned Dennehy performance as Hastur. More pronounced towards the end, he's really evil throughout. He treated the Sisters exactly as a demon would.

* Insufferable angels who believe they know God's will even though he has not expressed it.

All in all an excellent adaptation of a great book. Any changes made were necessary, and as small as possible. In fact, the changes allowed the miniseries to address what I thought was one of the failings of the book, which is (view spoiler)[ that Aziraphale and Crowley don't solve the problem. They are there for it but don't do much. In the miniseries, it's still Adam who takes the most important action, but Aziraphale and Crowley help him to that action.

I'm also pleased that both book and miniseries are essentially respectful to religion. Not to any particular expression of it, but the ineffable plan of God. We may not know it, and it is arrogance to assume we do. In fact, as Aziraphale and Crowley muse, the bugger might have had it all planned out from the start. Aziraphale brings the poignance of the ineffable plan well in the final scenes.

Welp, I'll stop there. I know I'm late to the discussion, but if peeps want to get into it, I'm glad to go a few rounds. (hide spoiler)]

Mod
It took me awhile, but I finally finished it a few weeks ago. I agree that it was a bit slow at times but I recall feeling something similar about the books.

I think I liked it better than the book. My favorite part was the episode where (view spoiler)[you follow the 2 angels through time learning about their friendship (hide spoiler)]