reply | flag *
message 2: by [deleted user] (new)
Nov 27, 2016 08:12PM
Hai, fellow mod buddies! <3 I was wondering---Where exactly is the whole claiming a requestable/standards for doing so again? I feel like it is kinda hard for new members to spot seeing it is not exactly obvious where that rule is (or I am just blind which can be true as well...) XD

Mod
I may have deleted the comment at one point but it was right below the requests. I'll add it back

Mod
You can make the Announcement thread in the Orientation folder. Thank you.

Mod
So to Sucre'd
I think I'd like to give you the ability to accept characters.
Typically I go by a few questions

-Is their power level above 7 and did they ask for it?
-Is it detailed 4+ sentences for both personality and history at the least
-Does their yokai freely roam the human surface world and if so then why? (considering yokai are hunted and can't always hide their abilities from humans)
-Does their human freely roam in the Yokai Realm? If so they have to change that, unless they're a slave to a yokai after having been captured or having fallen into the realm.
-Does their character conflict with the plot?
-Is their character power playing?
-How many over seven power characters has this person made (https://www.goodreads.com/topic/show/...)


Powers Among the Species


You don't have to provide character links, just put the number of characters with that specific power under the correct section. I just want to keep track of the population power.

Yo, holla if you need help with any of the updating

Mod
HmMMM
Uhm, well I'm going to need to make the "Purgatory" folder
the place where shinigami mostly roam I suppose
it's like an alternate, mirror universe but it's cold and monotonous.
I'm not sure if I should make it a folder or a thread, because it's technically a different dimension. And I don't even know if I should make it and stray too far from the plot.

I think it should be a thread
Don't the shinigami train there, as well? Wouldn't they live there, too?

Mod
yea they'd live there but they'd make their houses on the housing folder. The only big location within the shinigami realm that I can think of is the big building where they're trained and where they work. They do pretty much everything there.

so maybe just make a folder for that big building, with the different locations inside?

also, real quick, do reapers have uniforms or like a set dress code?

Mod
And perhaps, I'll figure it out eventually

I ask because I kinda fell in love am obsessed with the idea of Romi having to wear a uniform tailored to him by like Izanami
bc I can see her making them wear uniforms that she personally designs for each of them
(view spoiler)[i mean he looks amazing in it so why not???? 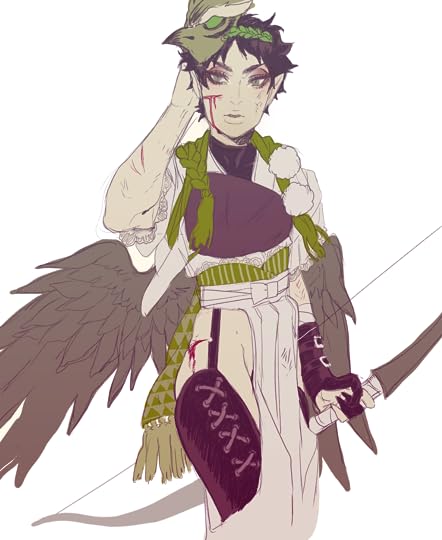 Mod
AHGHGHGHG
SAGE WOULD BE FREAKING OUT SO HARD

also, what a time of year is it in the roleplay? we should prolly establish that and let everyone know

Mod
what year is it? 3046
the war happened four hundred years ago
so 2746 ish, which is when the yokai were driven underground

The Outsider (Whales or Whatever) wrote: "AHGHGHGHG
SAGE WOULD BE FREAKING OUT SO HARD

The Outsider (Whales or Whatever) wrote: "what year is it? 3046
the war happened four hundred years ago
so 2746 ish, which is when the yokai were driven underground"

Mod
OH
well that depends on the district
Some of them are weather specific all year long because the gods are all out of whack without Amaterasu's guidance. The Seasonal District is currently experiencing summer.

Mod
The Crime District is always a bit windy but never too chilly, it's a warm wind, almost tropical.

the rest of the districts are pretty self explanatory

so would it still be december, or the equivalent thereof?

We should probably create a character help thread, so if someone asks for help in the chat, it doesn't get drowned.

Mod
oh, you can if you'd like, im heading off for a bit

Okay, so for the character approval process, I think we should make a separate thread. Because we might have a situation where we have to go through multiple characters and it might get lost under new characters being posted.

Mod
alrighty, if you feel it's appropriate
that's fine
can't make it now cause I'm on my phone

I can make it

Mod
That's a good idea yea, I can add that to Character List when I get home.

Mod
what?
this is mod chat and i have no idea what you're talking about
you don't have a right to post here regardless.
if you would kindly take this to chat please, i will address your..

Mod
Hey
so I had a thought
maybe like some kinds of weird diseases or something? I do not have this thought through very well but maybe some that can affect all animal type kinds, others for dead ones like shinigami and demons, some for all, etc. Idk fam.
If you like it I can do more for it and start to come up with some but yeah

Mod
Could someone deal with the reaper requests please

Mod
what requests? I'm willing just lmk what it is

feel free to delete after since I'm not a mod

Mod
Does it matter who goes with who or just random?
thanks babe

feel free to delete this too

Anything yah need help with in the latest update?

Mod
im thinking of making runewalkers, demigods essentially
like half god half human
though im not sure
they'd have to be requestables

I think making them requestable would be a good idea
do you have a list of new locations you want?

hmm okie doke
quick question, because I realize it was acknowledged in one of your posts, but are we going to sorta mention real world cultures?
because that can actually influence locations ^-^

Mod
oh true, what did you have in mind (also what did i say in the post im forgetful)

( there were two, both about Romi's uniform lol )
I was lowkey thinking of a Spirited Away situation for the yokai
and for places like the crime district, different places have different names/set ups for the same thing that make them feel totally different
plus wouldn't the different districts have like embassies to keep in contact/field problems within the different districts?
tourist sites? landmarks?
historical places of great significance, like maybe where the royal yokai family used to live?