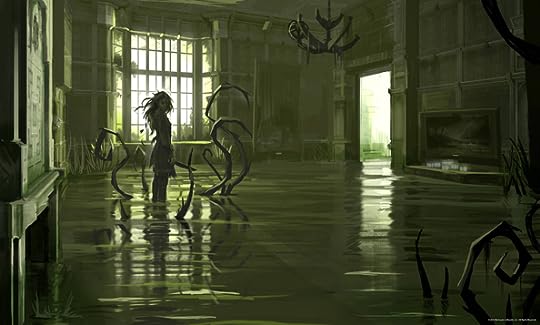 A few decades ago, the sea overcame the land in one of the largest parts of the Crime District. It completely overran guard's posts which is one of the biggest reasons that there was an uprising in the first place. Now these dark, flooded, abandoned streets are home to darker intented yokai like Kawako and some Okami.

The man, ungraciously named the target, ran quickly along the tops of the flooded buildings. It was risky going this way, but at this rate he had much rather be dealing with Yokai rather than who was currently after him. There were several of them actually. Guess that just what happens when you have a high bounty. With his pistol at arms length he slipped into the first building, careful to leave a few escape routes in care either a yokai or a bounty hunter showed up.

Veera frowned as she chased after her target. The guy was rather quick on his feet, and she was smart enough to know that she didn't want to land in the water, so her own pace was hindered as well. She didn't let the worry show on her face though. She had ditched the pink haired girl in order to do her first mission alone, but so far it had been nothing buy failures. She let him get away, and now she let him lead her out here. She was in a hard spot, and Ebony would never let her live this down if she failed.

Cegando sat at the edge of the rooftop, watching his prey run along the alleys and then slip into a building, noting he had a gun but not worried since he healed quickly and could even react to gunfire given enough lead time. He caught sight of another coming shortly after the target which he could tell immediately was female though with her arms guarded by odd gauntlets he noted that for if they found themselves fighting. He dropped down after she followed him in, deciding to take another entrance as he tracked the man by scent, using his cloaking now so he remained undetected in the low light of the building.

As Veera entered the building she made sure to load up her gauntlet before slowly making her way around the building. She was doing her best to look for traps or even just her target. He was shooting at her on the way here, so she knew he had a gun, but he could always get the drop on her if she wasn't careful.

The target grew worried as his surroundings got silent. He tried to listen for every little creek or snap that was around him. Soon growing fearful he made his way downstairs to where the water had flooded into the house. He could see movement in the water. Probably a Yokai that heard his loud footsteps. He'd much rather take his chances with that than being captured.

Cegando had not tracked the man in the house as well as he wanted, the smell of the rotting wood from the flood mixing with filth made smell all but useless so he had to go with sound and sight. Soon he came to the basement, seeing it had flooded as well had his target, seeing no way to sneak he let his cloaking drop, slowly showing his armored body and blade slung across his back. "You went to the dumbest of places boy" he said coldly, curious what his reaction was.

The target was not about to let him go on about his monologue and clever remarks, the second he heard a voice the man flipped out and started shooting as much as he could. The small enclosed space probably making it too loud for him to hear whatever he said. Although the gunshots also noted Veera to where her target was and she was quickly upon the basement's door, but she didn't make a move to go in yet. She want to figure out what the man had been shooting at.

Cegando growled as the dampeners in his suit activated just after the first shot, his hearing making it ring as the others either missed or only him minor places on him, cutting through but his flesh healing right after, some wounds, having bullets being shoved out of him before closing like he never been shot. "Now that was rather rude but either way I come for you, you just happen to make it dead instead of alive" he said, unsheathing his sword with a sinister shink then hum as the blade lit up.

Like the guy was going to stick around for that. He didn't even bother turning away from whatever that voice was as he took his chances at getting attacked by the yokai in the water. He tried swimming for an opening in the side of the basement, but it was clear to see something was already closing in on him. Veera quickly ran down the stair into the basement to see what was going on. It was a cramped space on the stairs so hopefully someone had the reaction time to do some fancy flips so that they didn't collide with each other.

Cegando was fast enough hearing her coming and now smelling clearly so he just simply leapt up and flipped over the person, seeing it was the woman from before as he landed behind her, blade now along her throat. "I don't take kindly to being attacked to the rear" he said into her ear, his other hand holding her arms across her chest.

"Um. You're the one who was messing with my bounty, so I don't know why you'd think I'd even bother with you," she said coldly as she turned to look at the frantic splashing in the water. "Oh great. Now we don't actually have any way to prove that he's dead," Veera said as she turned to the man with an accusatory look. She wasn't much phased by the blade. If anything she just seemed annoyed by it.

"I don't see that you tracked him very well so I wouldn't say yours" he said with a slight smile in his helmet while he watched something chase after the target. He shrugged at what she said "Well then lets give it some other prey" he said, shoving her in the water then jumping over to the side and lodging his blade in the wall so he stayed out of the water, grabbing out what he saw was the target.

She was about to shoot her own smart remark back at him, but she was cut off when he shoved him into the water. Luckily most of the Yokai were focusing on the first prey that fell in, but a few started to swim towards Veera once she fell in. Luckily she was far closer to a place she could clamber out of the water from. Only having to frantically kick a yokai in the face to keep her from herself from being dragged back in. Sadly the target was in far worse shape. In his panic of being grabbed by the yokai he welcomed the hand of the very man who had also tried to kill him, but with several yokai grabbing onto the target, pulling out the struggling target wouldn't be a simple task. For the average man that is. "What the hell was that for!" Veera yelled in anger at the man. Pointing one of her gauntlets at him.

Cegando smiled some as she scrambled to get out of the water while he plucked the man from the water, not even a challenge when he could lift a dozen with one arm. He smacked away the spare yokai clinging to him and then just grinned at hsi prey though it couldn't be seen. "Seems the enemy of your enemy is not your friend though a savior for short time" he said tossing him onto the stairs. "Because I always get my target" he answered, flipping off his blade into the water and pulling his sword out of the wall before walking to the stairs himself.

Veera was incredibly mad. This guy was a load of bullshit in her book, but she wasn't stupid enough to fight him. Instead she just flipped him off and turned away. Not going to waste time getting herself into deeper trouble than she already was. Maybe leaving Ebony behind was a mistake. At least Ebony would have found some way to get some money out of this. This sucked immensely, and it was only going to get worse when she had to go back to the guild and face. What was even worse was that her now white shirt was wet, and her jacket was too small to actually cover anything important. Stupid crime kingdom being warmer than the ice kingdom...

He just looked back with a slight bow, catching his prey and cuffing him before he escorted him to where the bounty could be collected. He wondered how exactly the woman would get out of that of where she was though he didn't care.

With no resistance he, sadly, got the bounty.