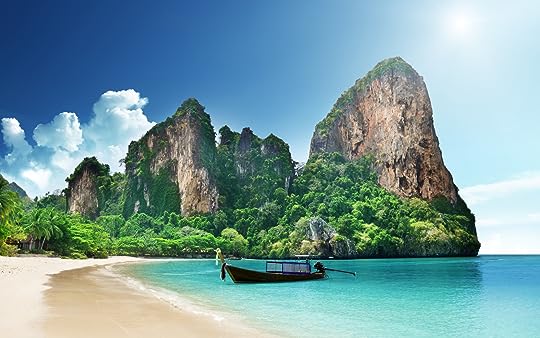 Mod
There was a terrible storm brewing in the distance. Malinda smelt it in the air as she slipped on a thin fishnet dress over her two piece bikini. She walked out of her home and down the small hidden path between the trees. She followed it until she came to the beach. She walked slowly along the shore line as she smelt the air grow saltier and saltier. She looked off into the distance and saw the storm flying in quickly. She sighed as she loved the rain. Not long did she wait before it began down pooring as she waves came crashing in toward the shore. She danced about the beach up and down the shore line in the rain. She performed her small rain dance as the storm continued to roar.

Hook was looking at the map that he had found in the paddle boat with Smee and couldn't help but to chuckle to himself. We will conquer this land. He thought to himself as lightening flashed outside the window of his quarters of the Jolly Rodger. With that he got up and quickly moved out onto the deck knowing that he needed to steer the Jolly Rodger to the closest island. The waves had been crashing and rocking the ship back and forth the next thing that happened was the ship's steering wheel broke and went flying hitting hook's head in the process. His ship had crashed sending him and debree flying out into the sea and thats where he was drifting on a piece of wood knocked out.

Mod
Melinda danced about the beach happily in the storm. that was until she tripped over something and crashed into the sand. She turned to look behind at what she had tripped over and she sees a big boot. The boot was attached to a large man that had wash ashore. Melinda stood up and brushed the sand from herself and squatted next to the sailor. He was faced down in the sand. She poked at him to see if he was still alive. There was no response. She poked at him again slightly harder and she for a really angry groan. "Still alive." She whispered. Malind softly pulled at his cloths as she picked pieces up to get a better observant of his cloths.She scowled gently as they were a little confusing. Malinda scooped her hands under him and flipped him over. She had a soft tint of pink on her cheeks as she saw the face of this man. There were two reasons to the shade changes of her cheeks. The first was as she looked him over, she realized that this man was a pirate. The second reason was he was a very attractive pirate. She noticed small bruising coming from under his silk pirate shirt coming from his chest. Malinda moved the fabric slightly to get a better look. "Well, pirate. You sure have had one bumpy ride in this storm." She whispered. She looked around to see if there were any others and saw that it was only him. Malinda rose to her feet and walked around him till she was standing at his head. She squatted once more to scoop her arms under his, scooping them under his pits, and lifted him as high as she could stand up straight. Then she dragged him all the way back to her home.