So, I got my cover for my fourth book: 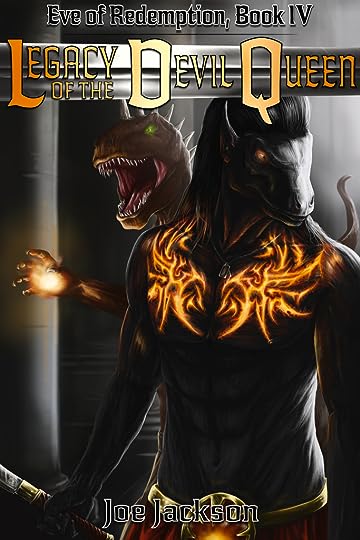 Here is the blurb I currently have. Seems a bit stiff, does anyone have any suggestions?

In the wake of a deadly attack, veteran demonhunter Karian Vanador faces a daunting task: sending her friends and family into danger without being at their side. With her pregnancy progressing, she must see to other tasks: she must uncover a spy within her own Order, expose servants of the demon kings living right in her home city, and match wits with enemies that she knows little, if anything, about. And in all of this, she must act as a general, putting the lives of her friends and family at risk to see to an end she can't accomplish herself.

Erijinkor Tesconis also faces a daunting task: he must lead the Silver Blades and their allies without Kari's expertise and sword arm. Though a capable leader, he and his companions face an unknown danger, something only seen once before in the world. Adding to the pressures of his task are challenges he is ill-prepared for: allying with werewolves, taking up authority over nobility, and working to patch relationships among his own family.

Both will face tests that push them to their limits, weighing the balance of love for their families against duty and a deep-seated desire to protect an entire world. But can either of them stand against the legacy of the Devil Queen herself?

I'll need to re-read the blurb but at first glance I like it. It's intriguing. BUT I just needed to say I LOVE THE COVER!!

Your name could be a bit bigger but even at that size it's nice. It's just a bit hard to see because of the belt behind it.

Thanks GG. Yeah, my name has been tricky because we're trying to stay consistent across the series without it disappearing. But of all the things on the cover, my name concerns me the least on a fourth book. ;)

First things first, I totally remember your last cover reveal! And I NEVER remember covers unless they are something special so...yeah. The image is striking. Dark but not muddied. And I agree with Miss GG about your name being too small BUT also understand needing to stay consistent across a series (personally obsessed with this myself haha!)

The blurb is good as well, albeit a bit long for my personal tastes. I really dig how you ended on a question!! And I liked the opening sentences of the 1st two paragraphs. They're repetitive and I actually feel that works splendidly.

Okay, no more free cents left for ya!

Wow! Great cover. I wasn't around for your prior cover reveals so I went to check them out and I like this one best. Very cool.

I think the blurb works well too. Maybe a little long, but after reading it a couple times I'm not sure what you'd remove or dice to make it shorter. It all seems important.

Thanks for the feedback, folks. It's much appreciated. :)

Mod
Sexy lizards on a cover?

Well, three covers of girls suggested it might be time to make a change while I can. Book 5 will have three girls on the cover again.