Comments about this story are welcome!

A General Theory of Oblivion is set in Angola. It's about a fictionalized, historical, formerly Portuguese woman Ludovico, who is left in her home at the beginning of the tumuluous Angolan Independence from Portugal. She is creative in her ability for survival, and after thirty years is basically rescued by a young, runaway boy.

As with the same author's The Book of Chameleons, many small, seemingly unrelated stories coalesce at the end. During Ludo's solitary years, partly with her large dog, in the eleventh-story residence, she writes her own stories in notebooks and on walls. Before burning a lot of furniture, wooden tiles, and eventually many books for fuel, she has the fortune of thousands of volumes all kinds of books as well as the possession of several large diamonds. Agualusa gives background to many of those possessions. Ludo herself harbors a mystery in her past, which the reader discovers at the end.

Angola is an independent nation since 1975. The chaos surrounding that event is a catalyst for Ludo's predicament in this novel.

Her sister and brother-in-law are lost, and thieves are breaking into the apartment. She is armed with a pistol and with bricks and cement from the anticipated building of a swimming pool.

(view spoiler)[She shoots through the door, builds a wall between her apartment and the building's corridor to the other apartments, and intermittently gazes at the lagoon, the neighbors, the sea, and the goings-on of the street far below from the terrace and windows. At other times, she reads from the massive library, uses up the vast stores of wine and the remaining food, yanks up a rooster and hen for eggs from a neighbor's terrace below, gathers the rain water and burns objects for fuel, anonymously moves around the terrace garden inside a box with eye slits, and eventually grows famished and bony along with the dog. After decades, her increasing blindness makes her writing a bigger and loopier scrawl and her reading as slow as a sloth. Then she finds the bread roll on the table and on the next day more nourishment... (hide spoiler)] 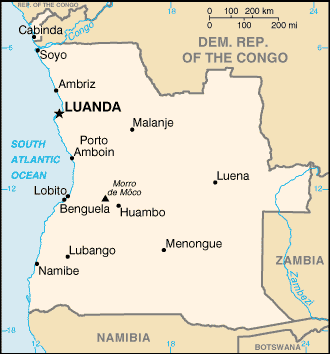 Early in this novel, there is the chapter "May 27" and elsewhere in it there are the cries of "Fractionist". Those two are connected. The nervousness of Ludo's dog on May 27 (1977) is the day of the coup. The Fractionist politcal party is responsible for the coup.

The retaliation for the attempted coup lasted a couple years and brought suffering and death to thousands of people.

"Roque Santeiro" = the big open-air market which would have been located in Luanda at the time of this novel.

Papy Bolingô (the popular name for historical guitarist François Luambo Luanzo Makiadi)= as a result of the May 27 coup he loses his job at Rádio Nacional but then rescues Little Chief and hides the small man for years in his apartment; Papy performs in bars with an expanding baby hippo Fofo.

Little Chief= he finds two very pure diamonds and an anonymous letter about a secret rendez-vous on a pigeon; with that money he starts the Pigeon-post messenger service and gains millions through investment.

Bolero=Spanish dance with three beats to the bar.

Coladeira=a morna with a livelier tempo.

Agualusa is writing a truly Angolan book about the country's recent history and its contemporary problems and is mixing fictional characters and events with historical ones. In his illuminating conflict, he is including Luandans and Angolans of distant provinces.

Mucabal people = a semi-nomadic ethnic group in the Namib Desert of southern Angola; the disruption to Mucabal shepherds and their herds of cattle after the private enclosure of grazing lands; paintings of the Mucabal and their surroundings by Albano Neves e Sousa.

Kianda = a goddess of the sea in Angolan mythology.

Elza Soares = a Brazilian singer of samba (Brazilian dance music with roots in Angola and the Congo).

Kuvale = probably speakers of the Kuvale language in the Namibe Province of Angola.

Chico Buarque = Brazilian singer and writer; music for the play "The Death and Life of Severino" by João Cabral de Melo Neto.

Daniel Benchimol = a good kind of detective with a specialty in disappearances.

Magno Moreira Monte = a character with a dark side.

The setting, characters, and plot are affected by political events, by interrupted utilities, by unseemly food shortages, and by humanity's dual nature of dark violence and pure love. The novel is a mix of realism and grotesqueness.

Maria Clara Capitão = pigeons transport letters and diamonds between her and Monte until one of the pigeons walks into Ludo's homemade snare. Feeling sorry for the interrupted message between the lovers, Ludo places two diamonds in its beak then sets it free. A hungry Little Chief (Arnaldo Cruz) spots it and the vial on its leg in a park, roasts it, and squirrels aware the message in his memory and transforms the diamonds into great wealth.

Blood diamonds = for the funding of insurgencies in Angola and elsewhere; instead, Little Chief and Ludo make beneficial use of diamonds, respectively, for land development and for restoration of land to its original owners.

Ludo's "Accident" = the physical and psycological crime against her in youth and the unjustifiable blame about it from others that traumatized her remaining life.