Every year, more and more LGBTQ people step out of their closets to show the world they are everyone's brothers, sisters, bosses, children, neighbors, doctors, sanitation workers, sports figures. There is and should be no schedule for that. Everyone makes that choice, to stay quietly in, or speak their truth, often over and over, a person at a time until they... are out. Or in a burst of honesty, pride, defiance, hope - "See me. See us. We are just like you and here to stay."

Today is not to push people to come out unready, but to celebrate those who have and are doing so, in gratitude and joy. THANK YOU, to everyone who has come out over the decades, for making my kids' lives that bit easier and safer, and for adding to the compassion and joy in diversity of this world. 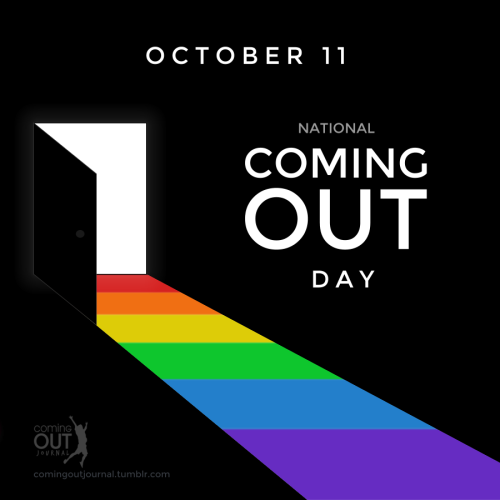 Thanks for this Kaje.
I am 21 years old, gay and out. I have been out for a long, long time now. I hope that other men/boys like me will have the possibility, support and environment to be able to come out too.
I hope that when more and more of us dare to speak up and out, it will make it easier for children and adults to do the same. And to live the life that really fits them the best.

I'm Bisexual straight out and I'm 15

A fun image from author and illustrator Cathrine Dair: 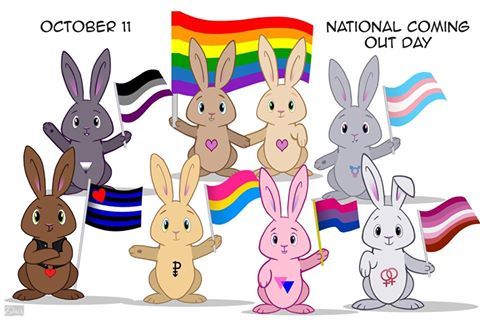 I figure the best way to come out is to dazzle them with your complete uniqueness as an individual. ;-)

Darren wrote: "Thanks for this Kaje.
I am 21 years old, gay and out. I have been out for a long, long time now. I hope that other men/boys like me will have the possibility, support and environment to be able to ..."

I had no idea about this day. I think it's awesome!

I came out when I was 14, and in my day it was much less accepted to be gay. Luckily I have the coolest parents imaginable. I remember I was shaking with nerves when I first told my Mom, this is how it went:

Dad was totally cool with it as well. I know that my coming out was much more accepting than what many GLBT individuals go through, but it was still difficult none the less. Just know that once you do decide to accept and declare who you are, it may not be easy or accepting from your family and peers, but you will feel stronger and a sense of relief. And with time, things will get better.

Jason wrote: "I had no idea about this day. I think it's awesome!

I came out when I was 14, and in my day it was much less accepted to be gay. Luckily I have the coolest parents imaginable. I remember I was sha..."

This is awesome, Jason. I wish everyone had parents like yours.

How lovely, Jason. May that become more and more of the way it goes. Thanks for sharing.

singer Rayvon Owen - on coming out -

Back in February, at the age of 24, I decided that it was time for me to share my truth and come out. It was one of the most terrifying, yet rewarding things I've ever done. Personally, as a man of faith and a devout Christian who basically grew up in a traditional Southern Baptist church, this decision was something with which I deeply struggled. I wanted to continue to honor God, whom I loved and worshipped, but felt like I could no longer honor Him, if I didn't honor myself. I'd been fighting what felt natural since the age of 5, but realized that I couldn't fight it any longer. I didn't want to fight it any longer. Professionally, this decision was also very scary. When I appeared on American Idol, many of my supporters, including a large number from my home state of Virginia, were from rural, more conservative areas. I worried that I would lose their support, but I knew that it was more important to live authentically than to spend the rest of my life in pain and denial. And with any luck, I would be able to encourage people who were possibly going through the same internal battle I was. I knew I owed it to all of the young people like me, who were also struggling to accept themselves in a world where so many people spew hate against the LGBT community.

I decided that I wanted to come out through the music video for my first single, "Can't Fight It." Originally the storyboard called for a female love interest, but ultimately I wanted to be honest and open and have it be a man. I had recently fallen in love with Shane Bitney Crone, so it only felt natural to ask him to play the love interest in the video. He was instrumental in helping me find my voice and guiding me through this journey, and has inspired me to become an advocate for equality.

Since the release, as I predicted, I have lost some fans, some friends, and even the support of some family members. What I've gained, however, has more than made up for it and I'm reminded every day that I made the right decision.

Today, October 11, is National Coming Out Day. In honor of the day, and everyone who has struggled or continues to struggle with coming out, I've decided to release an acoustic version of "Can't Fight It" and to donate 100% of the proceeds to The Trevor Project in order to support the organization's life-saving work for LGBT youth.

I wanted the video to illustrate that although the LGBT civil rights movement has come very far, we still have a long way to go. Thanks to the bravery of countless LGBT people, as well as straight allies, we've been able to make immense progress but so much is still at stake and people's lives are still in danger all over the world. As you can see in the video, though many of us are blessed to be happy and free, hundreds of thousands of LGBT citizens continue to be bullied, harassed, and even murdered. We must speak out against these injustices. We must share their stories. And we must let our government officials know that we support equality and that they should too.

You can download the song and support The Trevor Project here: bit.ly/ROstripped

Coming out is a deeply personal decision and everyone must do it in their own time. For those of you who have concerns or need guidance on how to do it safely, I encourage you to check out the links below. You'll find amazing resources that will help you.

Coming Out As You | The Trevor Project: http://www.thetrevorproject.org/secti...

Jason wrote: "I had no idea about this day. I think it's awesome!

I came out when I was 14, and in my day it was much less accepted to be gay. Luckily I have the coolest parents imaginable. I remember I was sha..."