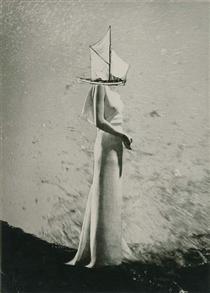 A Chronicle of Drifting
Kansuke Yamamoto 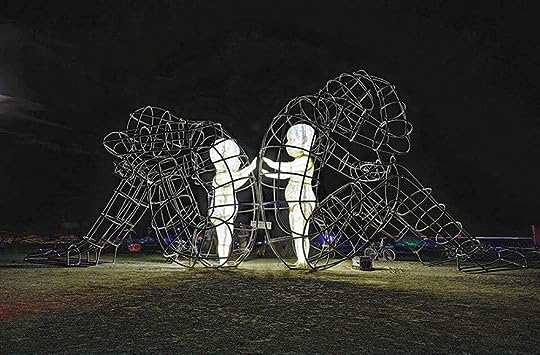 "There were thousands of beautiful works of art at this year’s Burning Man festival in Nevada, but there’s one that really caught people’s eyes and invited them to interpret its meaning. ‘Love,’ by Ukrainian sculptor Alexander Milov, features two wire-frame adults sitting back to back with their inner children reaching out to each other from within. At night, the inner children lit up as well.

You’re free tntso come to your own conclusions about the piece’s meaning, but here’s what Milov wrote about the piece on the festival’s website: “It demonstrates a conflict between a man and a woman as well as the outer and inner expression of human nature. Their inner selves are executed in the form of transparent children, who are holding out their hands through the grating. As it’s getting dark (night falls) the children start to shine. This shining is a symbol of purity and sincerity that brings people together and gives a chance of making up when the dark time arrives.”

More like third picture of the month! Sorry everyone.
I think this sculpture is so cool! 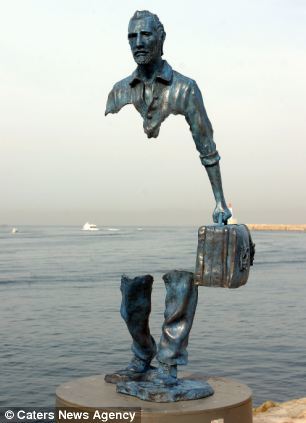 "Mr Catalano said: 'I have travelled a lot and I left Morocco when I was 12 years old. I felt that a part of me was gone and will never come back.

'From years of being a sailor, I was always leaving different countries and places each time and it's a process that we all go through." 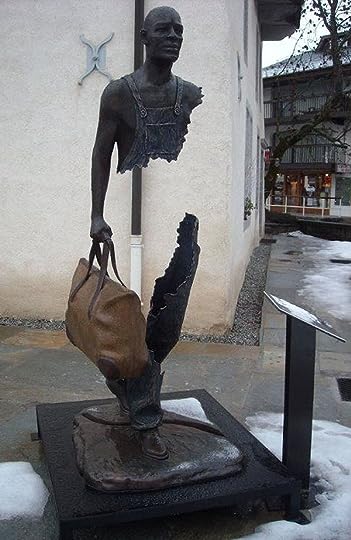 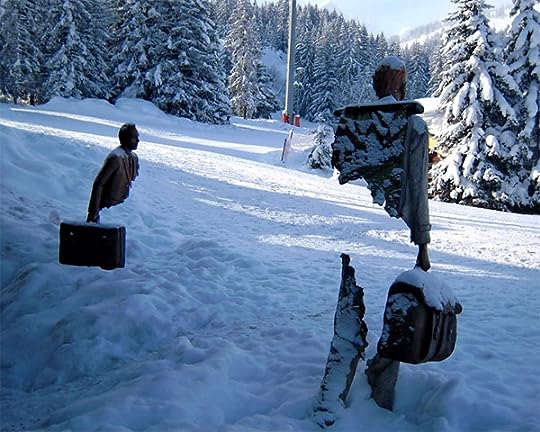 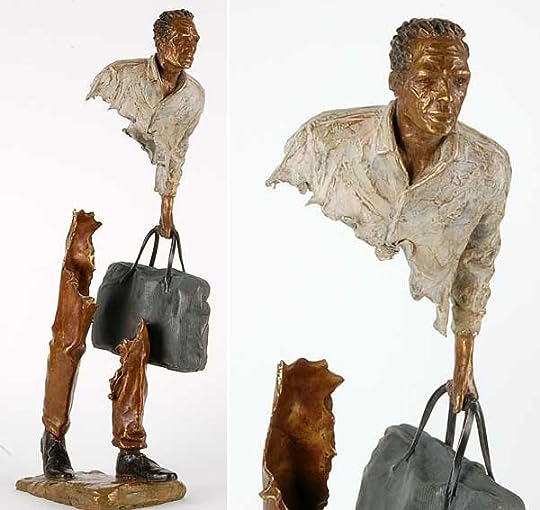 Very interesting statues, Heather. I have never seen anything like them. In particular so when the work is contrasted with a "normal" background such as the ocean or the winter landscape.
What are they made of? It looks like metal, but can the upper portion really be supported by the minor connection via the leg? Perhaps they are more resin based? It looks like a structural dilemma....
From a different perspective - is the artist stating that we are only partial in our existence within the industrialized world? Or are these people travelers? Refugees? What do you see?

Well, Haaze, first thank you for commenting! It seems we don't hear from you much!

I didn't find a whole lot of technical information about them as to what they are made of and how they stand, etc. as you said. I'm sorry and I don't know sculpture at all, it sounds like you know a bit more of what you are talking about.

As to my perspective and what he says above in traveling to different places including leaving Morocco at a young age, he says he feels he left "a part" of him there. Maybe he is saying that as we travel, or move around in our lives, we leave part of ourselves in that literal particular location, or maybe in that experience that will become a memory. Maybe that experience changes us and we leave a part of our past with that point and we will never be the same again.

Anyone else have a different perspective or like to add on to Haaze's questions?

I know, I am more of a bystander, but I have noticed how you are invigorating the group over the last few weeks. I figure that some participation will add to the process. :)
In terms of sculpture I do not know much at all about the process. I love art history in all its forms (well, the late 20th century is really not my cup of tea). My initial observations/reflections are more structural and psychological in nature coming from a very different angle than a true artist. I think it is true that we leave parts of ourselves behind in every place/situation/relationship we spend time. Especially so in terms of migration and long time periods being spent in different cultures. I can relate to the phenomenon as I have spent half of my life in Europe and the other in the US. I feel as if a part of me lives in each location and it is difficult to feel complete at times. When one visits one location the other place feels like a dream world and vice versa. Perhaps it is those qualities partially captured in the statues? At the same time one can read so much more into them depending on circumstances and experiences.

Haaze, you are awesome. I like your perspective, you almost said how I feel about his work, also. I studied in Europe, art, as a matter of fact. And now that seems like a dream, as you said. But like I mentioned, it is a memory and it did change me in some way. I left my 'old person' there in Europe with previous knowledge (or lack of) of the subjects and countries and left for home with 'new knowledge' and experiences that helped change my way of thinking of some things.

And I want to thank you, and you didn't even intend this, but you gave me another idea for a folder in the group! I will get to that as soon as I can as I am frantically running out the door right now. But thank you!

Hey! I am doing that exactly right now! I'm just trying to figure out how...

The person of convention, going about his routine in the office with his briefcase, is but half a person.

Geoffrey wrote: "The person of convention, going about his routine in the office with his briefcase, is but half a person."

Geoffrey wrote: "The person of convention, going about his routine in the office with his briefcase, is but half a person."

That's a disgusting thing to say. I am really, really tired of that cliche coming from artists. I had to stop reading one writer who used to be a favorite because his artist characters kept saying things like "well, thank GOD I don't have to work in an office, there's nothing worse than working in an office, some people are just not made to work in an office and I'm one of them, boy those people who work in offices are just pathetic drones"...

I'm so tired of people saying "Do what you love for a living" - as if it's just that easy. “’The biggest mistake people make in life is not trying to make a living at doing what they most enjoy,’ Malcolm Forbes of Forbes magazine said.” Not trying? NOT TRYING?? If I had time and space I'd talk about trying. But I can't, because I'm working in an office.

I went to art school. I planned a career in the arts. It didn't work out, despite many years of trying. So I work in an office. I don't have a choice. I've never had a choice. It's soul-crushing. I hate it. I don't need to hear from people who don't have to how wasted my life is - I'm well aware, and do not need their ... pity? Derision? Artists are supposed to be empathetic - that's supposed to be part of what makes them artists. I only wish they'd exercise it a little.

No, it´s not a disgusting thing to say. I commented on the artist´s intent, not the validity of the statement.

Geoffrey wrote: "No, it´s not a disgusting thing to say. I commented on the artist´s intent, not the validity of the statement."
Edit for clarity: that doesn't make it less offensive.

My comment is as clear as the sky on a sunny day. If it offends you, I am sorry for your sake.

Tracey, I’m like you with a Masters in painting but working in an office, corporate no less. I understand where you’re coming from. That’s why I try to fill my mind with as much soul-nourishing things as I can.

Also, artists and creative people are not necessarily the most empathetic or sensitive to others. Sensitive, yes, but not sensitive to others. Just read the history books. I once worked for a wealthy artist promoting her work. I thought it was going to be a dream job. She turned out to be the most selfish, entitled person I’ve ever met. She would use her intercom to order workers, maid and even her husband around. I still get announcements on her gallery shows. I feel like returning an email with a virus attachment because I can’t seem to get off the distribution list.

Geoffrey wrote: "My comment is as clear as the sky on a sunny day. If it offends you, I am sorry for your sake."

You really don't know how to not offend, do you? That's a step away from saying you'll pray for me.

Aloha, you're right; it crossed my mind as I was hitting the post button that my limited experience with "the art world" has actually been a thing that's made me glad not to be out there in it - artists are no better than anyone else. Which is why interpreting a work of art to slyly say "pfft, poor slobs with briefcases, they're only halfway human" is disgusting.

Tracey, I said it before and I will say it again, that was the artist`s intent. I was commenting on what the meaning of the work was as seen by the artist himself. If you have a problem with that I am sorry. That is no cause to get personal. And no, I don´t see why I would pray for you. I am an agnostic.

Geoffrey wrote: "The person of convention, going about his routine in the office with his briefcase, is but half a person.

I think Geoffrey, like he said, was just commenting on what he believes the artist was trying to convey by the above sculpture. That some people can't do what they love, like art, so they end up in an office, like everyone else. But they are only 'half' there because their whole self would be engaged in doing something they love.

Geoffrey, I'm sorry if I misinterpreted what you were saying, but that is what I get from the sculpture. And it does go along with what Tracey was saying. In fact, Tracey, you made his statement more clear to me in what you said...not being able to do what you love as employment, thus ending up in an office. You both actually agree as far as I can tell.

I think these are amazing sculptures. To me the last one looks more like an immigrant homesick, feeling like half of a person? His eyes look so sad.

Heather, spot on. Yes, that was what I was saying. Perhaps I should have been clearer about that in my initial post. I was hoping to provoke discussion, but hadn´t anticipated the maelstrom, (sp?)