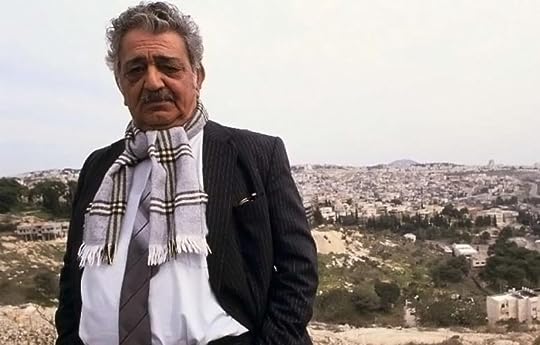 Here we are going to discuss The Secret Life of Saeed: The Pessoptimist by Emile Habiby ( 1922- 1969) . It was written in Arabic in 1974.
Emile Habibi is one of the Palestinian citizens of Israel , he stayed in Haifa after the 1948 Arab-Israeli War and was granted the Israeli citizenship. He moved to Nazareth ( known as "the Arab capital of Israel") in 1965 and remained there for the rest of his life , he was buried according to his request in Haifa His gravestone reads (at Habibi's own request): "Emile Habibi – Remained in Haifa."
Habiby is son of a Christian family and a communist politician , he helped to create the Israeli Communist Party (Maki) and established the communist paper Al-Ittihad. . He served in the Knesset between 1951 and 1959, and again from 1961 until 1972, first as a member of Maki, before breaking away from the party to found Rakah.

His first novel:"The Secret Life of Saeed the Pessoptimist" became a classic in modern Arabic literature. the Pessoptimist is (optimist + pessimist ) , The book depicts the life of an Palestinian, employing black humour and satire. It was based on the traditional anti-hero Said in Arab literature. In a playful way it deals with how it is for Arabs to live in the state of Israel, and how one who has nothing to do with politics is drawn in to it.

In 1990, Habibi received the Al-Quds Prize from the PLO and in 1992, he received the Israel Prize for Arabic literature.

** I read this novel a while ago , it was difficult to understand so I hope I will be able to catch up with you here , so who is joining me ?

I *loved* this book. There was plenty that went over my head, but I really enjoyed it. I look forward to this discussion.

Yay! My library has it, so have ordered it. These days I've been working a lot and am tired, so I don't know how I'll do with a "difficult to understand" book, but I'll give it a try!

Mod
Aj I am looking forward to this discussion too :)
I hope you will be able to catch up Lila (Jalila) :D

Ha, I just said that I wasn't actively participating in the group but then decided to check my local libraries' catalogs and found the book. So I do hope to check it out and start this weekend.

Mod
waiting for your comments all :)
I started to reread .

I got the book and will be starting it

I'm about a third of the way through but am I getting it? I mean, should I be reading something into it, is it coded language? I find it humorous but is there an underlying sharpness that I should be reading into it? I have so many questions about how to interpret it. Tragedy or comedy? A bitter comedy or a sharp-tongued tragedy? Is it biting satire?

Who is the alien dressed in the blue robe? Is it the result of PTSD, hallucinations after the tragedy of 1948 and his father's death?

When he runs into a soldier who speaks English and who says he loves Arabs and that they'll build kibbutzin for them -what? Is there anyone reading it who can give insight? Is it a Brit or American who is so ignorant as to not know what he's volunteering to do?

And what about when he thinks the name of Haifa has been changed? Is he an idiot? Or what is the author trying to say? I'm looking online for insight.

Found this that may be a start: http://english.al-akhbar.com/node/13462 and I am trying to find Mounira al-Solh's response (mentioned in article).

I'm not far enough into it to have an answer (if I ever will!) but really want to know what others are thinking. I'm just throwing out thoughts here. I am liking the book but sometimes think that when I read something from another experience, that perhaps I'm not getting it.

Haven't had time to read this one yet, and my eyes are saying no to the screen: http://www.pij.org/details.php?id=537

Mod
Interesting Kate , I admit it was a very confusing read for me at the frist time .
I will get back to you again with my new thoughts.

I've thought more about it. I think that it's difficult to gauge humor and satire from another culture and language. Kind of like when I feel outside an inside joke.

Mod
I am still reading (I stopped and got back ) and I think you are right Kate - feel outside an inside joke , I still can not get all of it , when he mention places and and historical names or situations to blend with the way he see things or mock them , it is difficult.
I am not sure if he see his family as a symbol to Palestinians in general and their complicated position.

Anybody is still reading ?

Niledaughter wrote: "Anybody is still reading ?
"

Sorry no, I won't be able to this time.

I finished the book and very much enjoyed it. The Introduction pretty much explains what I was struggling to understand. I thought it was very interesting. Does anyone want to discuss?

Mod
I am sorry you will not be able to Lila :(
Kate , I would like to hear about the introduction you mentioned , even though I am an Arab I feel it is not easy for me to catch up everything, I will try to contact a Palestinian friend and see if she can join the discussion.

The Secret Life of Saeed: The Pessoptimist (other topics)