note: This topic has been closed to new comments.
13 views
Archived > What does a book cover promise? 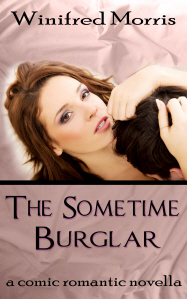 I'm running this cover by other groups that just critique covers, and they like it, but I'm wondering, since my character describes herself as a homely nerd, is this model too attractive? Since a sexy lawyer falls in love with her, she must be more attractive than she thinks she is, but this woman has expertly applied her makeup, and I doubt my character could do that. Are romance readers used to the people on the covers looking better than the characters in the book? Or at least better than those characters think they are?

Also, how much sex do you think this cover promises? There are a couple of sex scenes, but it's a comedy. A lot of other stuff is going on. Will a reader feel they've been misled if there isn't a lot of hot and heavy sex?

Here's a quick blurb to help with this discussion: Emma is a graduate student who is helping to pay her college expenses by doing burglaries for ex-spouses who got a raw deal in the divorce. Through one of these burglaries she gets a laptop that has incriminating information on it. This brings her into the world of political corruption and also into the condo of a sexy lawyer who seems to be falling in love with her. Or is he just using her for his own political gain?

I would help, but I would totally be no help because I never pay attention to covers, but I'm sure someone much more helpful than me will be along soon!! So really I'm just rambling, and saying hi!! Hi!! (✿◠‿◠)

I'm running this cover by other groups that just critique covers, and they like it, but I'm wondering, since my character describes herself as a homely nerd, is this model too attractive? Since a..."

The cover looks great. However, you raise good points of discussion.
You'd catch readers with the cover but they might get the wrong idea. However, you know the story. It might work if the story supports the cover in the end. This is only an opinion .

Mod
Hmm. To be completely honest, she doesn't read as a grad student to me at all. More of a naughty professor...

With that being said, I don't find the cover overtly sexual so I reckon you can get away with it...?

Sorry that's not much help!!

Sorry; I'm getting full on naughtiness from that cover tbh. :-/

But I really don't know what to suggest instead.
I'd say a lady in a lawyer suit, but that would quickly get overly sexy too. :-/

I don't think it looks overly sexy, but it doesn't portray nerdy to me.

It's a great looking cover regardless. I'm kinda like Princess Jane, I don't worry about covers too much. I like going based off blurbs, not covers.

Thank you all, and hi to you too! I guess now I'm thinking it is a romance, the relationship between the man and woman is the central story, and it ends with what I hope is an evocative sex scene. And I think this model could be a graduate student, but . . . here's a wacky experiment. 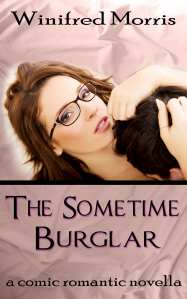 Too wacky? Ruins the whole thing? The character does wear glasses, although probably not to bed. Any thoughts will be appreciated.

I was going to suggest glasses to make a more "nerdy" look. Haha not that glasses say nerdy per se. But it does tame down her sexiness a bit with the glasses. I don't mind it:)

She looks a bit like Tina Fey, or is it just me? *smiles*

Mod
I'm still getting naughty professor (even more now haha) but not necessarily in a bad way...