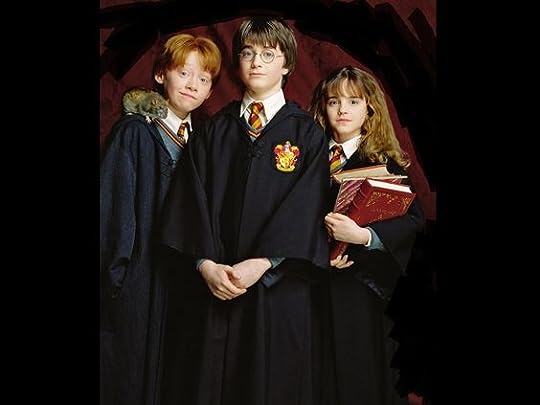 In honor of the upcoming movie premiere of Fantastic Beasts, many of our members have expressed a desire to revisit the book that brought paranormal fantasy back into popular culture, Harry Potter and the Sorcerer's Stone by J.K. Rowling.

This is a no-spoilers-barred ***CULT READ*** which means both the book and the movie (and the comparison between the two) are up for discussion. How has Harry Potter changed popular culture? Who read the books when they first came out and waited at midnight for the next release? Versus who came in via the movies and is reading the books for the first time now? Is the world-building and characters still as fantastic now as the first time you read it?

ARE YOU RE-READING HARRY POTTER? Shout it out in the discussion thread below, find some Book Buddies, and discuss your impressions of the book vs. the movie. Just remember to be kind please and use spoiler .html so you don't ruin the fun for somebody who's not so far along.

I'm going to try really hard to squeeze this in even though I just reread the whole series not too long ago. I'm here to represent all those hufflepuff's out there <3

Ooh I'm in. I actually just watched this while I was putting up my indoor Halloween decorations this weekend.

I'm one who saw all of the movies before reading any of the books. I did, however, do the whole wait in line for a midnight book release for Half-Blood Prince. I was in England doing a semester abroad at Cambridge that summer, and all my friends and family begged me to pick them up British copies of that and the previous books in the series. You can imagine how heavy my suitcase was at the end of that trip. That's probably why I took so long to read the books. Traipsing all over Cambridge on foot hunting down multiple copies of the books and lugging them back to my dorm made me a bit annoyed with HP.

I read the entire series last year, and I absolutely loved it. Oh, and I did the sorting hat thing on Pottermore and was placed in Slytherin. Yay?

Great I am busy reading it right now!

Mod
I've actually never read the books. I've seen all the movies. I -own- the books (or more precisely, my kids do). So it's time to buckle down and read along with friends :-)

Funny, I just finished rereading this a few weeks ago. I jumped on the HP bandwagon when The Goblet of Fire came out, but my husband is not much of a reader, and has only seen the movies. We're reading the series together now, and he's enjoying them too! :)

I'm glad people are reading the books. I may get hit for saying this, but I didn't care for the movies. I don't think they do justice to the books.

Mod
So far I'm enjoying the read :-) My kids are staring at me like 'wh-hat?' It's past time I read the book version.

I think the first 2 movies were great and then they severely departed from the books.

I've read the entire series 10 times. I never even heard of the books before the first movie came out, and didn't actually start reading them till the third movie came out when someone finally convinced me too much got left out of the movie and I really needed to read the book to get all the details. So of course I had to start from the beginning, and was hooked right away. :-P If you don't read the books and only watch the movies you are missing out on so much of the story! Especially with 5 and 6. So much got left out of the fifth movie, and they flat out made stuff up for the 6th movie, I wanted to send a copy of the book to whatever idiot wrote the script with a note to actually read the bloody thing before attempting to made a screenplay out of it! I don't care if they couldn't get the actors they needed to do the Christmas scene at the Burrow out of the book, they could have handled it differently! They could have just had the characters mention that Percy had shown up and had gotten into an argument with the family (before Harry's arrival) and had stormed out of the house, and that the Minister had shown up with him looking for Harry but of course Harry wasn't there yet, so he went away disappointed too. It would have taken them about two minutes to explain it that way, rather than have Death Eaters show up to burn down the Burrow (which never happened in the book, people, WTH is wrong with the idiots who made this movie?!?) and taunt Harry and the others,

Oh, and according to Pottermore I belong in Ravenclaw, and my Patronus is a Husky (a Husky? Really? I love dogs, but figured I'd get a cat of some kind). I never remember what my house is in the American school, but it's the one whose symbol is a cat of some kind.

Mod
I'm about halfway through the first book at the moment and the feel is very different from the movies. Harry feels much more like a kid in the books ... I suspect the movies deliberately made him seem more mature to appeal to a larger movie audience.

I was hooked from the first book. The first movie wasn't too bad because it was based on a short book without subplots, but every movie after that was worse and worse. They were silly. They spent way too much time on slapstick (Harry and Ron hanging out of the flying car going "Whoaaaa!" like Bill and Ted) and way too little time on story. Just my opinion.

Trish wrote: "I was hooked from the first book. The first movie wasn't too bad because it was based on a short book without subplots, but every movie after that was worse and worse. They were silly. They spent w..."

I guess they were trying to fill the time, since they apparently didn't think there was enough going on in the second book. What did they expect, it was another fairly short one, appealing to the tween crowd. The third book is where the action really starts to pick up, and you actually start getting some of the backstory on Harry's parents and the other Marauders. Hindsight, it's easier to tell where the story's going with some of the details, why they were put in the books in the first place, even if at the time some of it had us scratching our heads and going "Huh?"

The fourth movie didn't show any of the argument between Hagrid and his girlfriend, which may not seem important to some people, but does set things up later for why the two of them were picked to be ambassadors to the giants, which of course led the way for Hagrid's brother to enter the story, of which he plays a decent part later on during the battles at Hogwarts (he shows up looking for Hagrid in the sixth book and winds up helping the gang in that battle, and I believe, although I could be wrong, that he helps out in the battle between the Death Eaters and everyone else in the seventh book).

Other than my above-mentioned peeves with the sixth movie, my main problem with the fifth one was that they left too much out (again) and barely showed any of the problems the students gave Umbridge after she took over at Hogwarts. And because Peeves was only mentioned in the first movie, and never shown in any of them, all of his scenes were cut out of the fifth movie, and they were some of the best ones in the book! (Especially when he was following Toadface around :-P ) I almost fell on the floor laughing when he was unscrewing the light fixture and McGonagall walked past and told him "It unscrews the other way" out of the corner of her mouth, which was so uncharacteristic of her that it showed perfectly her feelings about the new Headmistress. And they left that out why? Because they couldn't be bothered to cast someone as Peeves? He actually played a pretty significant role in the books, albeit behind the scenes sometimes, and they only gave him a two-second mention in the first movie? He deserved way more than that, in my opinion.

Mod
Having just finished a screenwriting class (and utterly bombing -GAH - revisions!!!) I have a bit of sympathy for what the screenwriters tried to do. But I have to agree. Coming into the book for the first time, the book is so much more complex and rich :-)

Latasha wrote: "I think the first 2 movies were great and then they severely departed from the books."

I suspect that the last five books, being quite long relative to the first two books was a major reason for the later movies leaving so much out...

The movies could have been a kinda Game of Thrones set of series from about book four on.

My favourite movie is The Prisoner of Azkaban - especially the back half. I also quite like The Half Blood Prince for it's dark tone.

I have read the whole series at least twice, and started reading prior to the movies.

Overall - quite the fan and consider the whole Potter universe to be completely awesome.

Harry Potter and the Sorcerer's Stone (other topics)