This topic is about Rumours Of Rain
34 views
Booker Prize for Fiction > 1978 Shortlist: Rumours of Rain 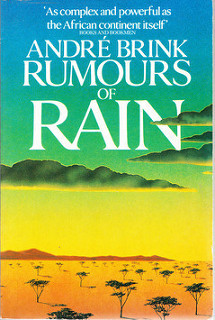 Winter in South Africa - a time of searing drought, angry stirrings in Soweto, and the shadow of the Angolan conflict cast across the scorched bush. Martin Mynhardt, a wealthy Afrikaner, plans a weekend at his old family farm.

But his visit coincides with a time of crisis in his personal life. In a few days, the security of a lifetime is destroyed and Mynhardt is left to face the wreckage of his future.

Mod
Has anyone else started this one yet? I read the first few pages last night and I suspect it is a bit of a slow burner - not the most likeable of narrators, but there seem to be a lot of scattered hints about where the story is going...

Mod
I have another 60 pages left to read, and I am finding this increasingly engrossing. The narrator Martin Mynhardt is still not likeable, but he is a very nuanced portrayal of an Afrikaner stereotype. The story is told in quite a fragmented style - as a form of memoir whose narrator gradually reveals more of the background to events which are rather cryptically alluded to early in the book, and there are many narrative jumps and changes of focus. If I have a slight criticism it is that certain characters and scenes seem to be there purely to make political points, but overall this is an extremely perceptive study of apartheid South Africa and the seeds of its eventual demise.

I'm about 40% into this one and I am fascinated by it. I don't particularly care for Martin but I think Bernard is very interesting. The author was obviously using some of the characters and story to make political points but I think it works ok in this situation.

Mod
Having had a couple of weeks to reflect, I am still really impressed with this book and would like to read more of Brink's work, so thanks to all who voted for 1978!

Will probably start the Rubens later this week.

As I get deeper into Booker 78, comparisons with the 2016 mix are starting to appear. Rumours of Rain and Do Not say We Have Nothing are directly comparable. Both are examinations of the actions and consequences brought about by oppressive government regimes on their people. Both books have leading characters who are apologists for the governing regime (Kai and Martin). I found both books utterly compelling, and rate Rumours of Rain very highly.
I confess that I haven’t read any Gordimer, and very little Coetzee, so this view of South African apartheid has probably been very well fictionalised/factionalised elsewhere.

It's unusual to come across a story where from start to finish, the narrator, our eyes and ears, is the most reviled character. Once I had a true feel for Martin Mynhardt as apologist for the spurious justification of apartheid I felt, as reader, actively engaged in seeing through the nonsense being promoted. I found this a great narrative device.

My only criticism of Rumours of Rain, is that the odious main character, Martin Mynhardt ,so openly revealed as a narcissist, exploitative in every respect; is loved by Bernard Franken and Bea Fiorini, and marries Elise . Surely Martin would not be surrounded by 'good' people. In the case of his son, Louis, this is more convincing; we cannot choose our parents or children, and the fractured relationship between father and son concluded as expected.

That said, I read a sports (tennis) book/semi autobiography this summer, 2016 ("A Handful of Summers"). It was written in 1978 by a South African tennis player (Gordon Forbes). I hated it. My review at the time mentioned "recurrent sexism bordering on misogyny throughout".
Martin Mynhardt's musings on women sounded familiar P424 if one cannot reach one's goal with a woman within a reasonable time, the relationship becomes uneconomical, the investment too large for the eventual returns"

In A handful of Summers the author freely acknowledges that he picked up the women overlooked by his much better mannered and gracious friend. And here we have Martin taking advantage of goodwill by association with his friend, Bernard.

Reading this twenty five years after apartheid's end, I suspect I felt rather less despair than I would have in 1978. It didn’t make the book any less enjoyable, and probably even more so than had I read Rumours of Rain on release.

Jonathan wrote: "Surely Martin would not be surrounded by 'good' people.."

His views were sadly commonplace, so for a 'good' person to reject relationships with every white to support apartheid would be difficult, much like every day I have to work closely with those who are quietly acquiesing while the U.S. governmentt contemplates internment camps.

That being said, I struggled with visualizing his relationship with Bernard as well. I justified it by recognizing how intelligent Martin was, how he challenged Bernard to flesh out his ideas. Meanwhile, Martin would occassionally cede ground in their ideological battles, so Bernard must have felt that there was a possibility of conversion.

I would have preferred it if Mynhardt had had some redeeming qualities. I feel it would have been a more challenging and interesting book if we'd found ourselves sympathising with him now and again; whereas, making him a terrible friend, father, son, husband, a sexist and a rapist on top of being a supporter of apartheid just seemed to be overdoing it a bit.

As for explaining why so many ‘good’ characters associate with him at all, I felt it was less a case of their endorsing any of his lifestyle choices, and more a case of giving him a chance to redeem himself. (In that sense the set-up felt close to a religious parable at times.) His mother says something along those lines to him near the end – ‘I'm not waiting to make up my mind, I'm waiting to give you a chance to change yours,’ or words to that effect.

Also bear in mind that they're almost all out of his life by the end of the novel. He notes in the final chapter that he'll have to go on ‘without their influence’ (again quoting from memory). The clear implication is that he's heading for a sticky end, in moral terms at least, and that we've been watching a tragedy of moral failure from someone who had every opportunity to snap out of it.

Warwick wrote: " He notes in the final chapter that he'll have to go on ‘without their influence’ ."

Towards the end, as things come to a head with his son, it becomes more evident that he realizes he's a jerk and that everyone in his life, even his mother!, thinks so. That makes the book take on the tone of a confession--he's deliberately looking back at the shitty things he's done to figure out why his family hates him. It's interesting to distinguish the things he realizes were morally wrong and the things he doesn't. For instance, he seems to realize that pushing his mother out of the farm is wrong and he spends a great amount of time justifying it to himself. Meanwhile, he doesn't seem to recognize racism whatsoever.

Warwick wrote: "I would have preferred it if Mynhardt had had some redeeming qualities. I feel it would have been a more challenging and interesting book if we'd found ourselves sympathising with him now and again." I completely agree: a bit more ambiguity in his personality would have made Mynhardt more believable to me.

Sara wrote: "It's interesting to distinguish the things he realizes were morally wrong and the things he doesn't." Thank you, Sara. This point is helpful to me better understand Rumours of Rain.