Mod
God on the Rocks, by Jane Gardam 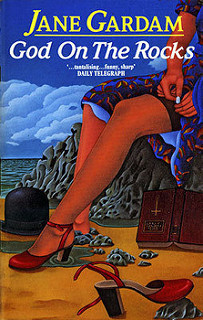 With the birth of her baby brother, eight-year-old Margaret Marsh is banished from the house every Wednesday afternoon to enjoy the idyllic English seaside — at peace between the world wars — with the family’s new, young, and bawdy maid. Largely ignored, the child has all the freedom she needs to observe and quietly condemn the adults around her.

Ok, I have officially finished my first book in the 1978 Booker shortlist project, and it was quite fine.

It definitely seemed to like a book written in the past, but I would not say that it seemed dated, if that distinction makes sense to you all.

Highlights for me:
child Margaret's pov, which I felt was deftly handled and engaging
Lydia's final speech to pastor Marsh
Margaret's feelings about her mother
the (admittedly extraneous) section where we really get to know nurse Booth

Mod
I am about two thirds of the way through this and finding it rather delightful - certainly a very different book to the Brink, but it does beg the question of how one can objectively compare such different books!

Hugh wrote: "it does beg the question of how one can objectively compare such different books!"
Nicole and I had both commented on the same point regarding The Sea, The Sea and A Five Year Sentence. I doubt that I can "objectively compare" books, but it's difficult for me to even simultaneously weigh what I appreciated about the Brink (or the Murdoch) and the Gardam (or the Ruben). While this issue certainly isn't unique to the 1978 shortlist, for whatever reason rereading the 1978 novels has made me consider this question more and more. Any insights on how the judges for the Booker and other prizes deal with this issue?

Mod
Dan wrote: "...While this issue certainly isn't unique to the 1978 shortlist, for whatever reason rereading the 1978 novels has made me consider this question more and more...."
Yes, and adding Kingsley Amis to the mix confuses the issue even further. We could have said similar things about this year's shortlist - The Sellout and Do Not Say We Have Nothing are also very difficult to compare...

So I'm off and running in the 1978 Booker revisit.
Not an auspicious start though.

God on the Rocks is a short book and with the exception of Elinor Marsh I felt that the characters were not sufficiently developed. This is not helped by the fact that the book splits half way through (a criticism of mine would be how disjointed the two halves were, though each half showed potential in its own right).
The book opens strongly. "High" church Puritanism is everywhere, laced with the hypocrisy that so often accompanies those who invoke the Lord to maintain control.

Certain characters felt a bit stereotypical. In particular Lydia's "ee by gum" dialogue grated on me. Lydia's reappearance at the end of the book felt like a convenient tying up of loose ends.
There is humour, but mostly of the Brian Rix slapstick variety. It seemed a bit dated.

I enjoyed God on the Rocks. It seems to take quite a lot of thought while reading, so even though it's short, I didn't read it that quickly. I would have found it a worthy winner, but perhaps that's because I wasn't that enamoured with The Sea, The Sea.